Ashanti Returns to Lifetime in "A Christmas Winter Song"

By Steve Gidlow December 13, 2019 Behind the Scenes in Hollywood Archives 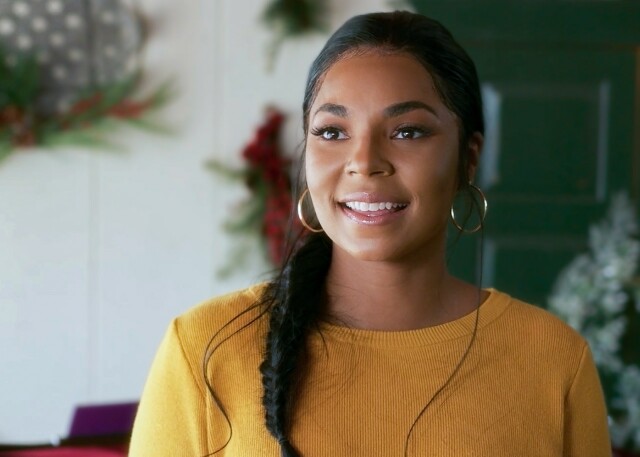 Multi-talented entertainer Ashanti returns to Lifetime this weekend in A Christmas Winter Song, playing a character completely different to the one she played six years ago in Lifetime’s Christmas in the City in which, as department store tyrant Teanna Musk, she devilishly wreaked havoc on Christmas for everyone.  In Winter Song, she plays Clio, a Christmas shop owner who befriends Fred (Stan Shaw, pictured below with Ashanti), a homeless former jazz singer, and helps him reconnect with his fractured family.  “I thought this story was really touching,” she revealed during a recent chat with MediaVillage. “It’s something that goes beyond Christmas.  So many people will be able to relate.  It sends a message to never judge a book by its cover.  I know that’s something we all know, but you never know who you may meet who will change your life.

“After Clio loses her dad, this stranger fills a void for her,” she continued.  “But it’s kind of like we both fill voids in each other and go from complete strangers to being like family.  It’s a special movie with a really cool message, and it was so great to be a part of it.” 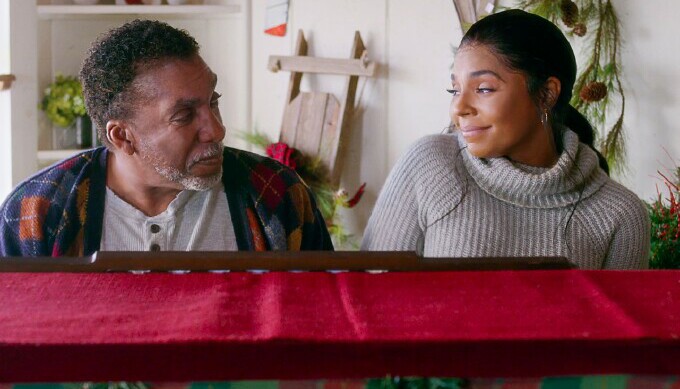 One aspect of the story that appealed to Ashanti was that it addresses the epidemic of homelessness that has a hold on the country.  “I think it’s important when you have a platform to keep people aware of real-life issues,” she explained.  “Keep the conversation going to the point of, ‘How do we resolve this?’  That’s not just for Hollywood and movies.  These are real struggles people go through.  I think it’s important and it’s cool for me to be a part of that awareness so we can affect change.”

With six years passing between Lifetime Christmas projects, I had to ask the star why she waited so long after Christmas in the City to make another.  “Life was happening,” she reflected.  “Music is a priority for me.  I’m busy touring.  Also, you want the right project.  Scripts come in and often they’re great, but just not for you.  So, when something great comes along, that’s when I know it’s time to jump on board.

“For Christmas, film and music go hand in hand,” she added.  “In other areas with film, I kind of try to steer away from the music element as I want people to see Ashanti the actress, not the singer.  Sometimes I’ll get a script and say I don’t want anything to do with music and would rather focus on the character.  But with Christmas, I can make the marriage.  I [do] like that Lifetime has a musical element to their films.  All I’m going to say [about singing in this one] is tune in.  But I do have two Christmas albums out, so …”

According to Ashanti, for her the holidays are a family affair, and carving out time to spend with loved ones gets her in the spirit.  “We all work so much during the year, that it’s important to gather for the holidays,” she shared.  “I host a tree-trimming party at my house, where we do co-co and candy canes, hang out in our PJs with singing and dancing and cakes, pies and ice cream!  It’s always a really good time and it’s important for someone like me who travels so much, to really spend time with family members I don’t get to see during the year and make it a good time.”

If those gatherings involve watching an Ashanti Christmas flick, she’s good with that, too.  “I think it would be really cool to make these movies a Christmas tradition,” she said.  “I don’t need to hit people over the head every year, but we can sprinkle them around.  They really bring people together, and it’s important to have people around you that you love.  Even if you don’t have a big family, it’s something you can do with really good friends or cool co-workers.  I’m all about love and positive energy.

“Christmas has a different vibe to the rest of the year,” she continued.  “Of course, we want to be thankful, count our blessings and be grateful.  But also, be giving and celebrate being happy.  Whatever might be going on in your life from January through November, December is the time for Christmas spirit!

“Lifetime is a great place to do that,” she added.  “So many people are a part of the Lifetime family, and they are the epitome of the Christmas spirit.  When I did Christmas in the City, we shot a commercial and song for it, and then the calls started coming in from family and high school friends saying, ‘Ashanti is on!  It must be Christmas time!’”

As 2020 fast approaches, the busy multi-tasker is hard at work on upcoming projects she has in the works, including a new tour.  “I am excited for what’s happening,” she shared in closing.  “I’m a perfectionist, so I’d love to be in the studio 24/7 creating, but I know I also have to sign off on the budget.  Being a Libra I kind of balance things out naturally, but it can also get overwhelming as I am also very indecisive.  It’s bad.  Thank God I have an amazing team.  I call on my sister a lot, texting her for advice.  It’s that family thing!”

A Christmas Winter Songwill premiere Saturday, December 14 at 8 p.m. on Lifetime as a part of the network's It’s a Wonderful Lifetime holiday programming event.