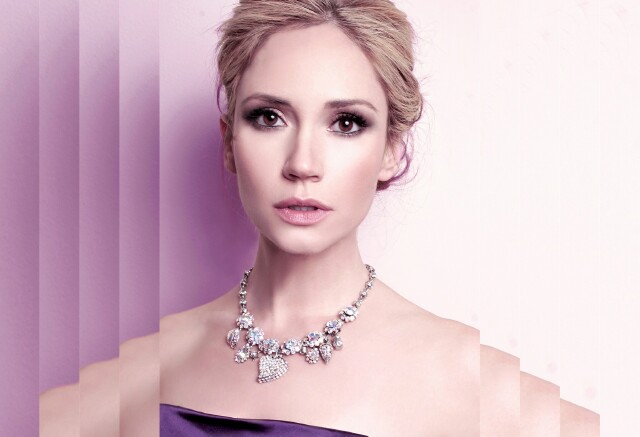 Ashley Jones returns to Lifetime this weekend in the thriller Homekilling Queen.  The film marks her eighth outing for the network, and as long as they keep inviting her, Jones (pictured at top) says she’ll be there.  "I have done a few Lifetime movies now," she laughed when MediaVillage spoke to her exclusively about the project.  "When you're an actress you want to do different things.  When something works in your schedule and your sensibility, you take it.  Lifetime has worked with my schedule and has always timed things very well.  I really love working with the producers they hire.  We have a great relationship and I'll continue to work for them for as long as they need me.  When you have an ongoing relationship, in any business, it's something you want to keep going.  I know what the outcome of the project will be; it'll be exactly what the audience wants and something I can back 100 percent."

In Homekilling Queen, Jones portrays Connie Manning, mother to homecoming queen front-runner (and slightly deranged) Whitney Manning (Kaitlyn Bernard), who will stop at nothing to be crowned.  Sadly, Whitney is a product of her environment; her mother and grandmother, Evelyn (Jennifer Dale) were both former queens, and have instilled in the young woman that winning is everything. So, when the edgy dark horse, Natasha Hart (Kayleigh Shikanai), enters the homecoming race, the unhinged Whitney sets out to destroy her competition by any means possible -- even murder.

According to the General Hospitaland The Bold and the Beautiful alum, getting to play something of a villain in Connie was a treat as it’s something she hasn’t done since her days on True Blood playing shape-shifter Daphne Landry.  “I’ve always played a goodhearted person,” she shared.  “However, on True Blood, as much as my character thought she was a good girl, she was extremely manipulative, aligned herself with the wrong side of society, and really was not out to spread goodwill.

“Often when I guest on a nighttime show, I’ll be the villain,” she continued.  “But those are one-offs, and with this, when you really get to see a little more of Connie's mind, it made it a really fun role to play.  As much as you try to pull from your own life experiences, there's only so much you can do when the character is quite a bit different to how you live your life.”

Jones told me she did draw inspiration for Connie from people she’d encountered over the years, but nobody anyone would know and mainly from her days in Texas during the 1980s.  “I remember feeling like the parents only identity in life was if their child won the prize in a pageant or whatever it may be,” she said.   “Parents living vicariously through their children was very common. I remember feeling like they were out of touch with what was going on with the kids.

“I’m usually juggling many things, but I understand so much of what's going on with my kids and I know when they need me,” she added.  “To push all of that aside for something like becoming a homecoming queen? I don't quite get that. What I loved about the film was the metaphor that it’s about not shutting that emotion off for the prize.  It’s also about the parent being so preoccupied and not realizing what's going on with the child.  Something I hope people take away from the film when they watch is to just put the phone down for a couple of extra minutes every day and pay attention to their kids.  Then, I believe, we will have done our jobs.”

Jones hopes another takeaway from her Lifetime projects is entertainment.  If she’s providing that then, professionally, she’s done her job.  “I love hearing about those moments,” she said.  “After watching so many of these [movies] myself, I think the appeal really is that by a certain point you know what's happening and maybe what's going to happen.  There’s a formula and you kind of know what you're getting yourself into, but they really allow you to escape and dive into someone else's life.  When my husband and I get alone time, we love to escape with Killing Eve or Homeland -- just escape into someone else's world.”

While she awaits news of her next Lifetime movie (hopefully to film later this month), the busy mom is honing her directing skills and working on a line of Cannabidiol (CBD)-infused skin care products. “I’m really excited about that,” she beamed. “I'm into lifestyle and wellness and write a blog about what's going on in my life at ashleyajones.com.  I've been exploring the benefits of CBD oil and what it can do for our skin -- externally -- and through my personal experience.  I've had skin issues throughout my life and been exploring ways of fixing them naturally and the benefits of using CBD oil.  I'm happy with the samples and can say it's helped with my issues.”

Homekilling Queenwill be telecast Saturday, May 11 at 8 p.m. on Lifetime.