Audrey Morrissey:  The Musician Behind “The Voice” 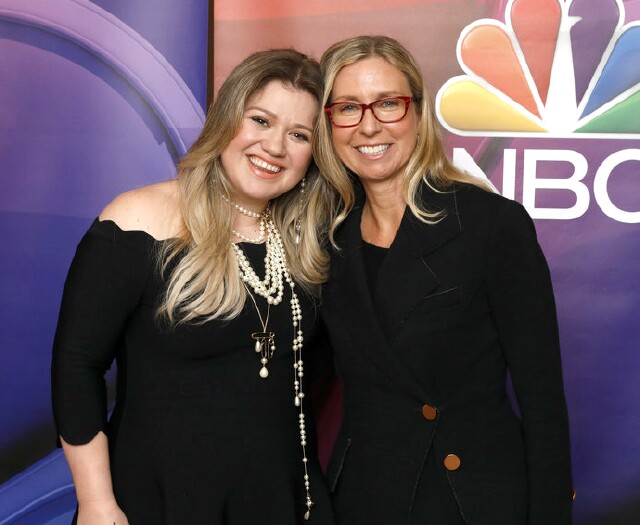 People concentrating may not sound like the makings for scintillating television.  Yet watch the coaches on The Voice in the simple act of listening, and you’re drawn in.  NBC’s talent contest, now in its 15th season, remains a staple on the primetime line-up for good reason: it’s fun.  Being in on the moment a star is born is exciting.  Over seven-and-a-half years some of the biggest stars in the music business, including Alicia Keys, Miley Cyrus, Pharrell Williams, CeeLo Green, Gwen Stefani, Usher, Christina Aguilera and, now, Kelly Clarkson and Jennifer Hudson – along with the original dynamic duo of Blake Shelton and Adam Levine -- have carefully listened and without benefit of visuals tried to lure the best singers to their teams.  (Levine, Clarkson, Hudson and Shelton are pictured in the photos below.)

However, one musician on The Voice has since its inception been mostly absent from that spotlight -- showrunner and executive producer Audrey Morrissey (pictured at top right with Kelly Clarkson).  With a background in music, Morrissey came up through the ranks of MTV.  She reflected on her career in a recent interview with MediaVillage.

Jacqueline Cutler:  What was it about The Voice that attracted you?

Audrey Morrissey:  Mark Burnett and I were knee-deep in crafting what a show would look like that was distinct from American Idol.  When The Voice launched in Holland, fortunately I was able to see episodes of the show, albeit in Dutch, but I could follow.

Jackie:  Do you see this as a purer contest since it all comes down to just the singer’s voices?

Audrey:  Traditionally, it’s the first way you typically become familiar with a new artist.  You don’t necessarily have visuals when you are listening to the radio or you are streaming a song. 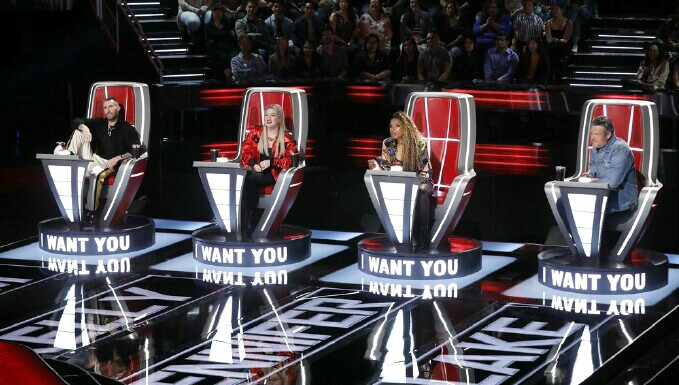 Jackie:  The Voice has won multiple Emmys and remains a ratings powerhouse.  Why does this show work as well as it does?

Audrey:  It really comes down to why does somebody turn a chair?  You could literally have all identical looking people there.  It’s that indescribable element of their voice.

Jackie:  What is your musical background?

Audrey:  I was one of those musical kids that played piano and a bunch of different instruments. In high school, I was in a rock band.  In college I sang in an a cappella group.  I was a music minor and English major at Colgate.  I knew my way around a studio, around simple recording.  I did a lot of arranging, and I was a singer, so that really has helped me throughout my career whether at MTV or here at The Voice.

Jackie:  How has the landscape changed for women as showrunners?

Audrey:  Especially in this past year, there is a lot of focus on women in every platform.  But I will say, for me personally, I think I was super fortunate that my first job out of college was at MTV. I say that because that was such a young network and a young company.  When I started I remember people saying the oldest person in the company was 35 or 40.

Jackie:  So, in your experience it was not unusual for women to break through?

Audrey:  Everybody had such autonomy and responsibility way beyond their years than what they should have had and would have been given elsewhere.  All of my bosses at MTV were women; they were running the departments, all the top executives.  For most of that time there was a female president -- Judy McGrath -- so my role models were everywhere.  I had no sense that might be atypical.  There was no sense of a glass ceiling, because that wasn’t my experience.  I thank MTV and all the people that were there at the time and still are.  They created the most exciting, creative, authentic, incredible experience for men and women.  It was a non-issue.  I do think that informed a lot of my thinking.  Obviously if you see it around you, you can envision that for yourself.

Jackie:  Did you always know you could assume the mantle of a showrunner?

Audrey:  There was never any sense I could not be a showrunner one day.  Of course I could!  That was my good fortune and I am really happy to have had that.  Now there are more opportunities for women than ever and what is exciting about now is there is even more access to make your own destiny through entrepreneurship for women.  You just have access to so much, and if you are in a place where you are going to bet on yourself, you can through affordable technology and making key relationships.

Jackie:  What are the most important aspects of being a showrunner?

Audrey:  At the end of the day it rests on your shoulders to make sure the show happens.  That means you really have to hire the right team.  A show is always changing, morphing, and you want it to do that to remain relevant. 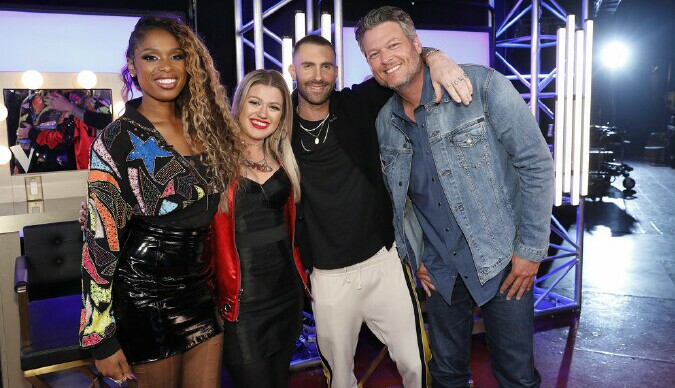 Jackie:  What are your goals for this season?

Audrey:  Our goals don’t really waiver; to have an exciting cast and have great music that blows away viewers.  To have some memorable people that do well and to have viewers really get inspired and connect with these young artists and want to be on that journey with them and see how they do.  To entertain and inspire as many people as possible and to support our past winners.

Jackie:  Do you still create music?

Audrey:  It’s so funny you ask that.  I was just in a studio with Dave Stewart, who is one part of the Eurhythmics, and we were laying down some tracks because we are working on the theme music for a new show I am doing with NBC called Songland.  It’s focused on songwriters.

The Voiceis telecast Monday and Tuesday at 8 p.m. on NBC.