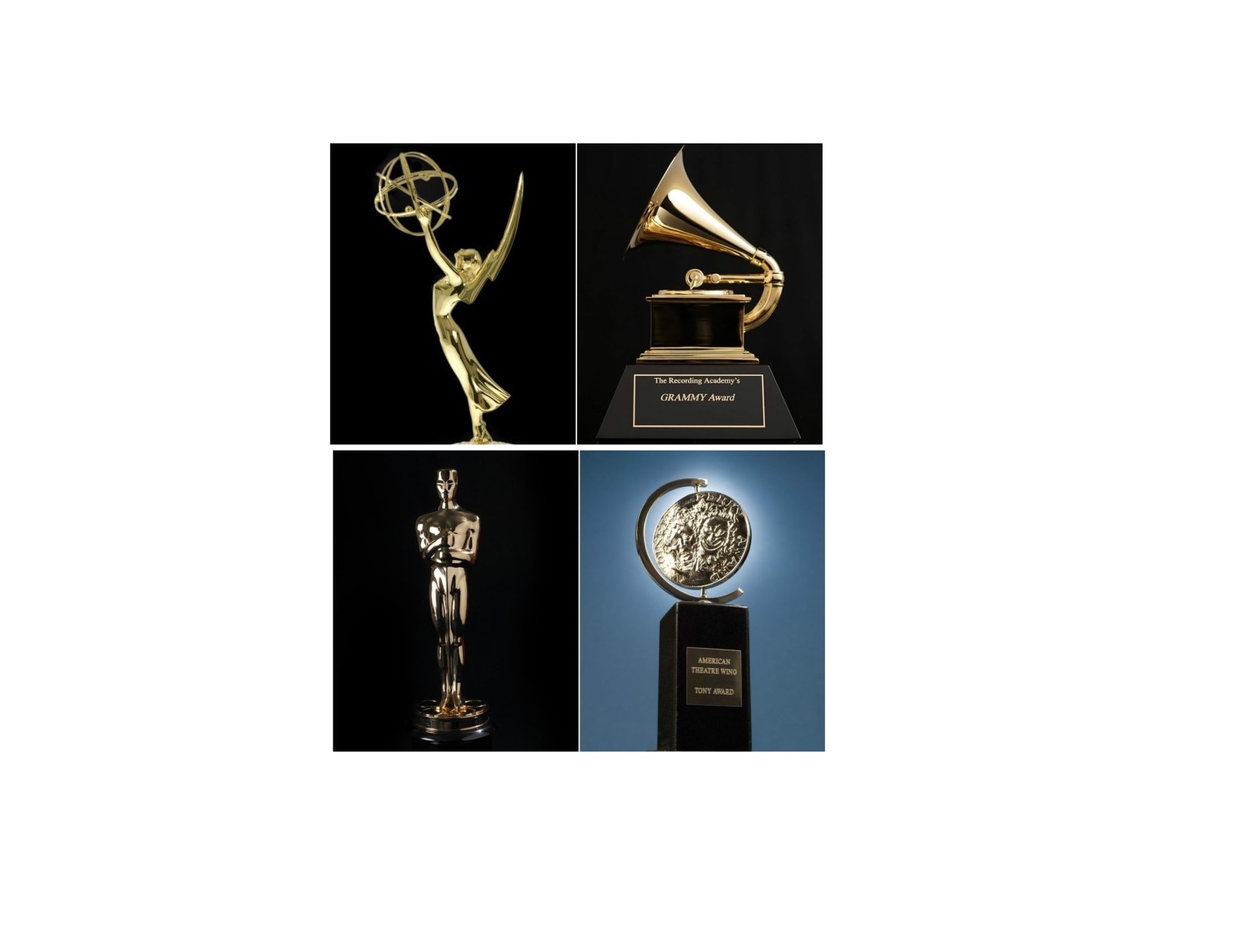 The Golden Globes kicked off the 2021 awards season by announcing its nominations last week. I'm excited to see Tina Fey and Amy Poehler hosting again; it's sure to be an evening filled with laughs and inspiration.

Most shows pushed back their dates in hopes of in-person events, effectively spreading the season out compared to the typical year. We'll see if safety protocols and vaccination rates will allow for in-person ceremonies or if awards shows will opt for virtual events like last year's Emmys. I'm curious if awards show viewership will see the same boost general TV viewership has seen since the beginning of the pandemic and if we'll see a change in who tunes in?

With Nielsen claiming viewership of awards shows has been declining for decades, especially among U.S. adults aged 18-49, I wanted to understand if awards shows have relevance for a broader audience beyond live viewers. Social chatter and media coverage certainly suggest this to be the case. While headlines tout the demise of awards shows, there may be untapped potential for transformation here. Is there more of an appetite with a virtual and digital experience now available? What could the future of awards shows be?

To find out, I looked at YouGov Profiles data on the most watched award shows: Golden Globe Awards, Academy Awards, Grammy Awards and Emmy Awards.

People are three times as likely to express interest in awards shows than the number that actually watch them live. That's a big opportunity for advertisers to reimagine the experience, extending reach and relevance.

Awards show watchers are much older than the general population: over half are 55 or older. However, the appeal of awards shows is broader than just those who watch the events themselves. People interested in awards shows have an age spread closer to total adults (although still slightly older). By reframing the award show experience beyond the event itself, there is an opportunity to engage the interest of a younger audience. 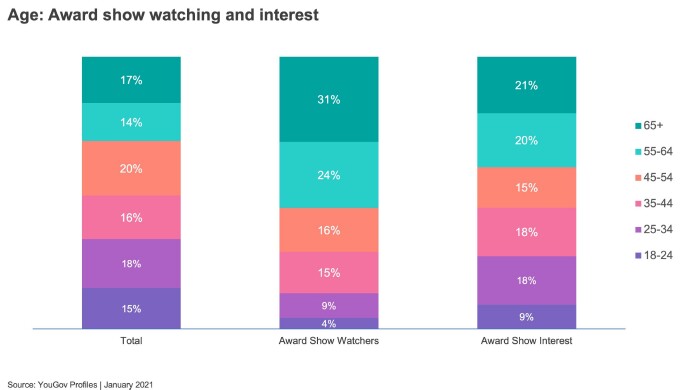 There is also an opportunity to be more gender-balanced when connecting with people interested in awards shows versus when targeting watchers of the show itself. Awards show watchers skew just under two-thirds female, but the female skew is milder among adults who are interested in award shows. 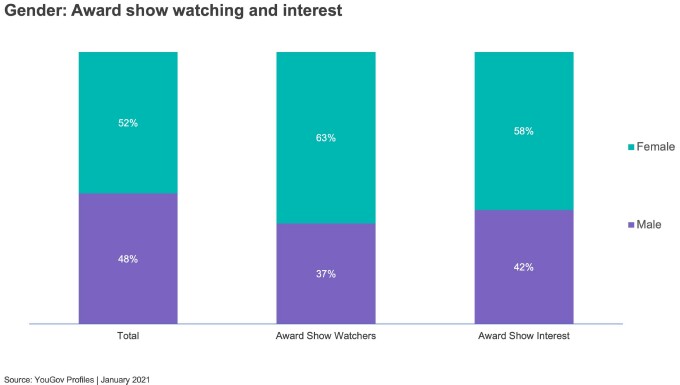 As awards shows and the larger entertainment industry work to increase diverse representation, perhaps more of this interest can be converted to viewership. Awards show watchers skew slightly more White than total U.S. adults, which is expected given their older age. However, people interested in awards shows are just as diverse -- arguably slightly more diverse -- than the racial makeup of the U.S. population. 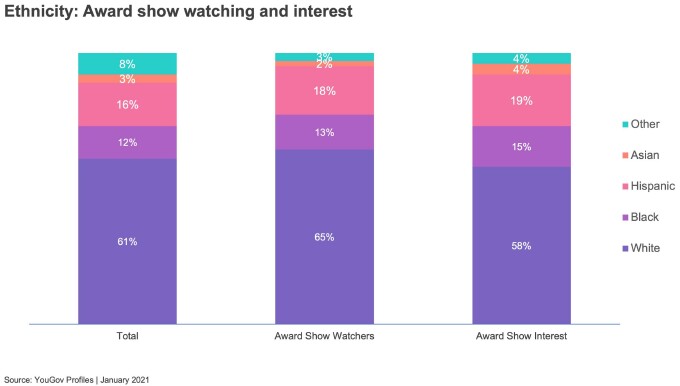 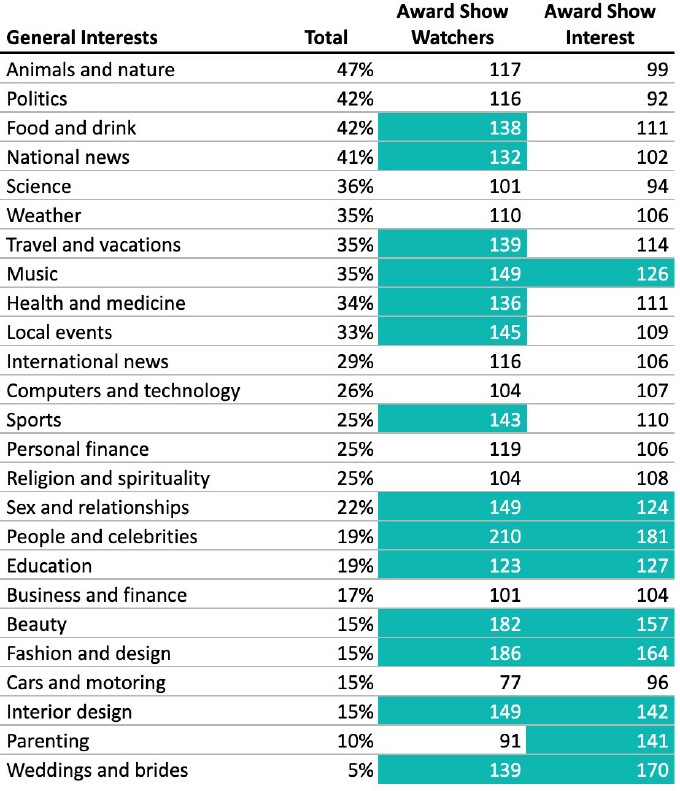 Looking at media consumption, audio and social channels could be important in how the impact of awards shows extends beyond the typical broadcast and live stream of the event itself. We see that people are not going to be awards show watchers unless they tend to also watch live TV, with 98% of awards show watchers saying they watch live TV during a typical week. However, people who are interested in awards shows over-index in their usage of audio channels (radio and streaming) and social media (especially Twitter and Instagram). 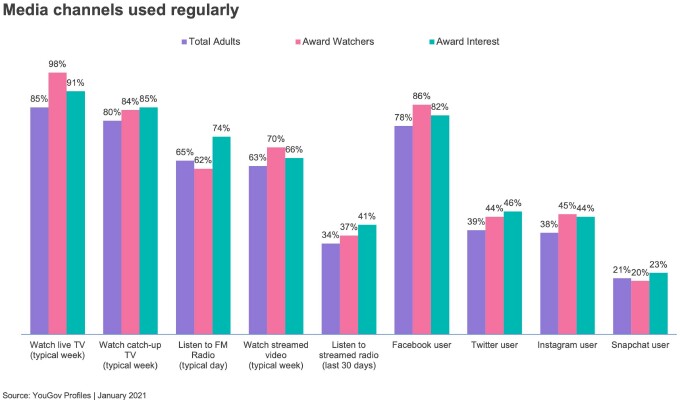 Regardless of TV ratings, the recognition of talent, creativity, and artistry at the heart of award shows continue to make them relevant to a broad and diverse audience.

The challenge for industry organizations and networks is to transform the experience beyond the traditional format and distribution strategy. New ways to engage a broader audience must be explored. Are there ways that people interested in television, film and music could become a part of the nomination process or voting process? How can fans be incorporated into the live event? Does there even need to be a live event? Radical changes might need to be on the table -- at least for consideration -- to grow the full potential of awards shows' reach and relevance.

The speed of change continues to accelerate, and the past year has thrown us some real curveballs! The right data can empower marketers to more confidently navigate today and plan for tomorrow. I love to strategize and help. Contact me to see this data, and more, broken out for your target audience.