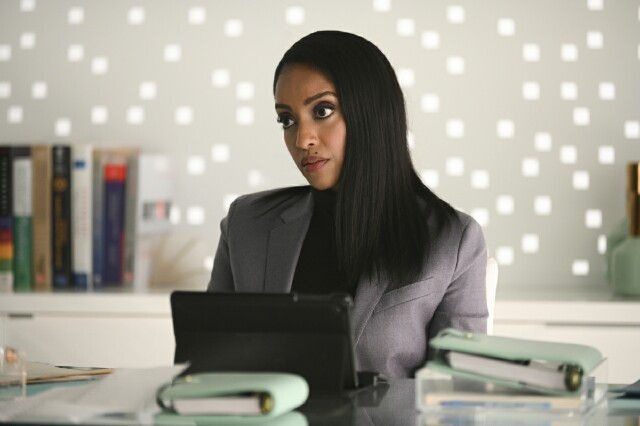 When Azie Tesfai joined the cast of The CW's Supergirl as Kelly Olsen in the show's fourth season, she had no idea what her character's trajectory would be. Little did she know just how important that character would become on so many levels. As the series moves towards its final episodes, Tesfai has been given a four-episode arc, one that sees Kelly take over the mantle (from her brother Jimmy Olsen) of Guardian, the shield-wielding superhero.

"I had an idea of Kelly's personal journey, but I didn't know about the superhero journey," Tesfai explained in an exclusive interview with MediaVillage. "I also had an idea in terms of the representation with telling her story, which was important, but I didn't know where that was going. That part was very planned out. But the rest of it has been a wonderful surprise as to how she got into her power this season.

"Finding her powers as a superhero, it's never linear," she continued. "Kelly started as a civilian, she came onto the show to be there for her brother, met this gorgeous woman, and fell in love. That whole process was an emotional rollercoaster. Your brother is sick, you meet someone that you have chemistry with and fall in love. It's so messy and complicated. I liked that I didn't know because in life we don't where the future is going to take us."

Tesfai thanks Supergirl fans for Kelly's current trajectory. "The fans started making Guardian fan art for Kelly when I first started," she recalled. "It was something that was publicly pushed for. Then COVID happened, and there were a lot of things that made it kind of not 'a moment.' [Instead] it was a 'potential moment.' Then schedules got moved around so it didn't have a big boom. It was kind of a slow burn.

"But once it was official, the first thing I wanted to do was get with our stunt team and get some physical training," she added laughing. "That has been the most fun part by far. I went in every day to train with them. Our stunt team really took me under their wing, and it got me tough and strong!"

Coming up with the perfect Guardian costume proved to be a lengthy process. "We started initially with the idea of it two years ago in Los Angeles," Tesfai explained. "We started with a fitting at Ironhead Studios, who did Black Panther and Wonder Woman, where I did a full-body scan. Then the storyline got pushed. Then we did another one up here at an incredible studio in Vancouver. Then I end up going back down to Ironhead, so yes, this moment has been years in the making.

"The suit had gone through different iterations," she continued. "The original suit was much closer to Jimmy's. A lot has happened in the last couple of years, not just with Kelly, but within society. Once I'd really come into writing more for television, my personal views on what a black female superhero should look like, I talked with my showrunners about it. A lot of what [it] ends up looking like was a shift from that. Going from the full helmet to the half helmet, that came with the shift over the last two years and the timeliness of what's happening in the world and conversations we were having."

One thing that made Tesfai's transition to superhero even more special was the fact that she got to pen the fourth episode of her story arc (to be telecast on September 21) -- a rarity for most actors. "Over the year that we were locked down, between seasons, I had been writing a lot and started developing some ideas with a showrunner I'd worked with on another show," she shared. "I had written a spec script of a Supergirl storyline I really wanted to do with Kelly that we ended up not being able to do. The showrunners loved it. I thought this voice of Kelly's was interesting in terms of her evolution. It was enough to get me approved to write an episode.

"Then this arc came about," she continued. "It worked out perfectly. I'm protective of Kelly and have a really strong vision of what I see for her, and my showrunners agreed. I was in the writers' room for a month from ten till five every single day. I broke the arc that's coming up for the back half of the season for Kelly and then we did the outlines for my episode. It was amazing to be a part of that conversation and to be able to have so much say and control over this character stepping into her powers.

"As I'm finding my power within my voice as a writer, there was an empowering parallel between Kelly and I that was inspiring," she added in closing. "It was a beautiful thing to get to go through an emotional journey with your character at the same time in real life. It lit a fire for me. Now all I want to do is tell these kinds of stories."

Supergirl is telecast Tuesdays at 9 p.m. on The CW.