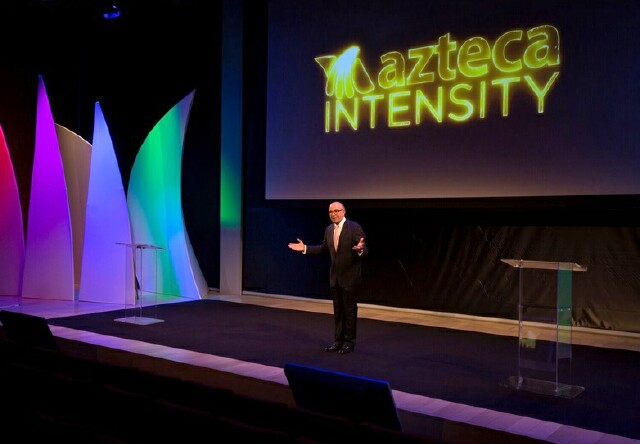 Venue:  Times Center on W. 41st St. near Times Square. Graduating from the Gramercy Park Hotel's penthouse last spring, Azteca used the two large spaces of this stately orange-walled edifice for its effort -- The Stage auditorium on the main level for its presentation and The Hall one flight down for the after-reception.  Projected logos in the front lobby and a mini-black carpet space on one side welcomed attendees and network talent.  Inside The Stage, Azteca's multi-color logo occupied both sides of the stage, separated by a large video screen and podiums in the center. The Hall downstairs was the less-formal, funky area, filled with a variety of small sofas, chairs and tables, a photo stand, bar in the back and DJ to the right. Unfortunately, the presentation started 25 minutes late, and at one point when attendees roamed the front lobby pre-presentation, a false fire alarm was triggered.  The latter incident was resolved within two minutes, leaving Azteca executives with new material for their presentation patter. However, given the crowd noise, any announcement made of a false alarm came off garbled. Times Center management, get this situation handled.  Grade: 3 Jacksfor the space,1.5 Jacksfor lateness. (Also, a desultory 0 Jacks to the Times Center for its inferior emergency sounds system.)

Presentation:  In rapid-fire fashion, Azteca President and CEO Manuel Abud (pictured at top) and his colleagues promised to maintain and expand his network's strategy of a diverse weeknight primetime schedule.  The expansion includes creation on an ongoing basis of U.S.-produced series, both scripted and unscripted, and more opportunities for community outreach around the U.S. with advertiser participation. "This will be a special (season)," Abud said, referring to 2017-18. "The goal is to build successful, long-lasting relationships. We're redoubling our effort to earn your dollars." 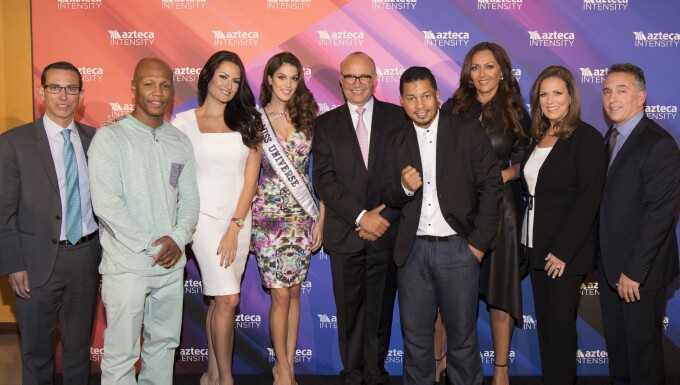 News:  The new U.S. series push kicks off with two projects: El Muro/The Wall and Knock Out. El Muro will be a 50-episode weeknight drama depicting ripped-from-the-headlines immigrant experiences along the Arizona/Mexico border.  Every five episodes will offer a different "border story," while the lead plot -- undocumented immigrant woman falls in love with U.S. immigration officer charged with deporting her back to Mexico -- unfolds week by week. El Muro will debut next winter and be produced by an outside organization (undisclosed at the presentation). In another Azteca first, many scenes will be bilingual, as in actors speaking Spanish and English. Knock Out takes an unscripted, all-access profile of boxers inside and outside their rise to championship contention.  The basic primetime format -- a far cry from a reliance on mostly telenovelas Azteca that adopted last year -- will continue. La Hora Ganadora/The Game Show Hour begins the block at 7 p.m., followed by a mix of reality series, drama series and specials at 8. Newsmagazine hour Al Extremo/Extreme keeps its 9 p.m. position, and drama series wrap each weeknight at 10. New scripted/unscripted series ahead include Manicomio/Mental Hospital (reporter turns up misdeeds in a psychiatric facility), Relatos Misteriosos/Mystical Tales (part documentary, part recreated incidents of the supernatural) and productions originating from Kanal D in Turkey.  Ten hours each week will be devoted to sports coverage, with new emphasis on boxing and mixed martial arts events. The popular Friday Night Soccer series, involving several top league teams in Mexico, came to an end last year when Azteca sold TV rights of those games to another network. Grade: 4 Jacks

Cuisine: Mix of funky and tasty food to match the atmosphere in The Hall, served at food stations at opposite corners of the room and by waiters. Best eats: striped bass, kale salad with lemon vinegarette dressing and creamy pasta with peas and other veggies.  Worst eats: Nothing comes to mind.  All very delicious.  Grade: 4 Jacks (Note: Cuisine ratings do not count in the overall Jacks score.)

Data Insight: One out of every five Azteca viewers plan to purchase a vehicle over the next 12 months. "Last time I had insights like this, it was through Walter Mercado [the popular Spanish-language TV astrologer during the 1980s and 1990s] or the Long island Medium [reference to the TLC celebrity]," Geller quipped.  Grade: 3.5 Jacks

Overall Grade:  3.5 Jacks  Few on-stage frills, well-rounded and paced message (delivered in under 30 minutes) and plenty of content news to work through. Had the presentation started on time or close and there had been a bit more star involvement the result would likely have been 4 Jacks.