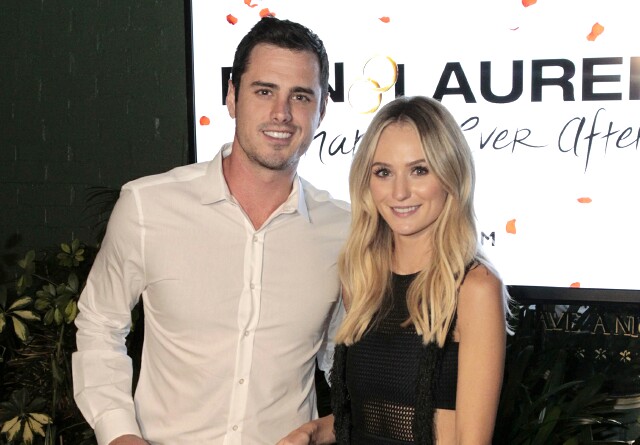 Life has been a whirlwind for Ben Higgins and Lauren Bushnell since the debut of their Freeform series Ben & Lauren: Happily Ever After?  If it’s not a premiere party in New York, it’s an informal engagement party in Los Angeles (pictured above); all helping to make the show the highest rated on the network. There is never a dull moment. On this week's episode Lauren laid to rest those rumors of a feud with JoJo Fletcher (the other woman Ben professed his love to on The Bachelor) after a lunch with JoJo and her beau Jordan Rogers.

“That was a really good platform for me to clear the air,” Lauren told me at the couple's informal engagement party, which was hosted by Freeform. “I never want people to think I'm the girl who doesn't support other women.  I stand for women being empowered -- not being catty or jealous.”

Lauren insisted any issues she and Ben had were with The Bachelor and never involved JoJo. “It wasn’t about her,” she explained. “It was just a very weird situation. JoJo just happened to be the last one, other than myself, at the end [of the season].  If anything, JoJo was a victim coming out of the show, as was I and so was Ben. A lot of it was moving past all of that and not necessarily about the situation with JoJo.”

With that resolved, the couple tackled another demon on this week's episode when they embarked on a friendly camping trip (along with some of their Bachelor family) that went south when Bachelorette bad boy Chad Johnson crashed the party. Camping with The Chad (as he is known) is probably as dangerous as it gets; who can forget his ousting by JoJo in the woods and that maniacal whistle of his as he roamed his way home. (Campers Chris Soules, Ben, Lauren, Grant Kemp, Lace Morris, Emily Ferguson and Haley Ferguson are pictured below, left to right.) 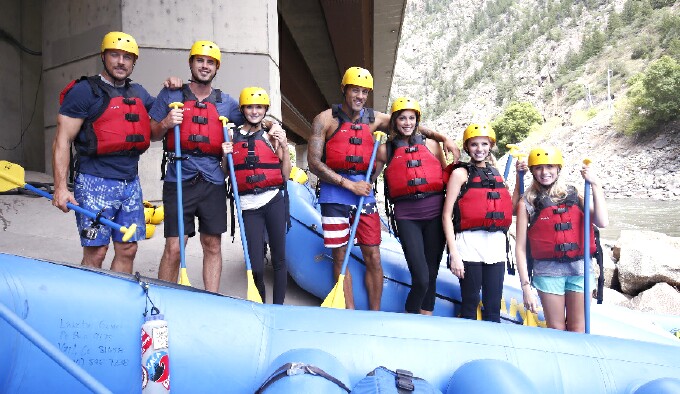 No contestant in Bachelorette history left viewers more polarized than Chad.  His constant threats of violence and menacing presence had Bachelor Nation aghast.  Chad attempted redemption on Bachelor in Paradise, but that also ended badly when host Chris Harrison sent him packing for doing what he does best -- being Bad Chad. So why would Ben and Lauren risk poking the bear, especially in the woods?

“There’s a lot more to Chad than you know,” said Lauren, who first met him at JoJo’s After the Final Rosespecial. “He was sitting by himself and I felt bad for him I went over to talk to him," she recalled. "I saw, maybe, a different side to him. I’m not sure if I was correct in that.”

When it comes to redemption, Ben is all for the couple's show providing Chad with a platform -- as long as he leaves the drama in the woods. “Our show isn't drama-filled, and Lauren and I don't really have that in our life,” he told me.  “I confronted him at one point and said, 'Do you want to be this man for the rest of your life? Do you want to be the guy people look at and the first thing that comes to mind is something bad?'" (Chad's response can be seen in this week's episode.)

Lauren says Chad is “misunderstood.” Higgins believes he is "lonely.” However, both are unsure if he actually wants to change. “He’s between a rock and a hard place,” Ben said. “Bachelor people see him as Big Bad Chad, and I don't know that some of them want that to change. But I think in his heart of hearts Chad does.”

“You might see a little bit of the Chad that we all know,” added Lauren, who told me Chad hasn’t quite made their wedding guest list yet. “We may have to go camping a couple of more times before and I'd need to get to know him a little bit better,” she concluded.