Backstage at the "Dancing with the Stars" Season 27 Premiere 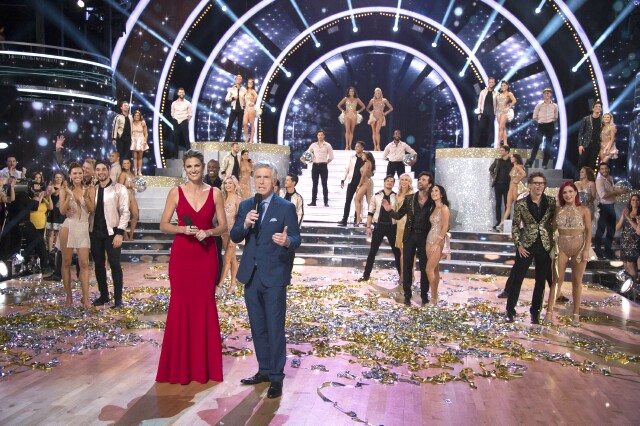 Dancing with the Stars kicked off its 27th season Monday night on ABC with 13 new cast members vying for the coveted Mirror Ball trophy.  Many of the competitors were immediately put through their paces, performing an always challenging jive or quickstep during the first live telecast.  Facts of Life star Nancy McKeon (with partner Val Chmerkovskiy) was among them but seemed right at home on the ballroom floor quickstepping her way to a respectable score of 18 out of a possible 30.  “I wanted to do this because it was terrifying and I wanted to do something completely different,” she excitedly told MediaVillage after her dance.  “I’ve been home for a while raising my family and I kind of wanted to step out, although maybe not this much, but I’m here now.”

McKeon had an interesting take on being handed a tough first dance.  “When we found out there were several emojis and an asterisk,” she laughed about texting with Chmerkovskiy.  “But I think it worked out great because right off the bat it was sheer joy and fun and Val gave us a beautiful dance that was awesome.”

Olympic great Mary Lou Retton (with Sasha Farber) opened the show with their cha-cha, and despite being no stranger to performing in front of a crowd, she was scared.  “I was nervous, but I did have fun,” she admitted.  “I think we set a good tone for the evening and the energy was amazing.”  Retton is also no stranger to awaiting scores, admitting waiting to hear 17 out of 30 came with flashbacks. “But our judges wore blue blazers, they dress a little nicer here,” she laughed.

The night couldn’t have gone better for Dukes of Hazard star John Schneider (partnered with Emma Slater).  He received 18 out of 30 for his foxtrot and was glowing post-show.  “I had so much fun,” he beamed.  “But you also have to get over the opening night.  Part of that is feeling comfortable.  I had a blast and maybe did get a little loose, but that’s okay because I was having fun.”

Harry Potter star Evanna Lynch (and Keo Motsepe) got to live a lifelong dream by performing her foxtrot.  The young actor had dreamed of attending dance school, only to be repeatedly rejected.  Maybe the little spell she cast upon herself helped to get that 18 out of 30.  “I did do my positive affirmations,” she told MediaVillage after the show.  “I sat at home and visualized doing it right, so that is kind of a spell.”

The night’s biggest surprise came courtesy of alpine skier Danelle Umstead (with Artem Chigvintsev), the show’s first blind contestant.  At 13 Umstead was diagnosed with the degenerative eye condition Retinitis Pigmentosa.  (She also battles multiple sclerosis.)  Despite having no central or peripheral vision she performed a beautiful foxtrot.  “I feel proud that I did show my emotions out there,” she shared post-show.  “Being the first blind dancer on this show was a proud moment and I hope to show America more of what we can do.

“In 2007 I was watching the show with my baby son, four inches away from the television screen, and I said, ‘I want to be the first blind contestant on the show,’” she continued.  “I threw it out to the universe and it came full circle.  I didn’t think it was possible, but Artem is teaching me my possible and I’m now living it every day.”

Emerging frontrunners included Fuller House star Juan Pablo Di Pace (with Cheryl Burke), retired Super Bowl champion DeMarcus Ware (with Lindsay Arnold) and R&B singer Tinashe (paired with Alan Bersten).  Di Pace’s exuberant salsa displayed a high level of skill and was awarded 22 out of 30 while Ware’s cha-cha saw him leap into action and receive 23 out of 30 for his prowess. Tinashe found herself tied for the top of the leaderboard with 23 out of 30 for her dynamic jive.

Ware realizes he has some added pressure considering the track records of past NFL players who have ruled the ballroom.  “Those guys did well because they liked to compete,” he said.  “They made themselves comfortable in uncomfortable situations and that’s what I did tonight.”

Dancing with the Starsis telecast Monday at 8 p.m. on ABC.