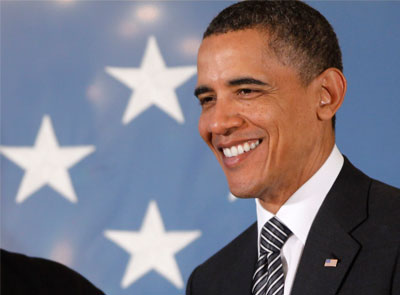 Barack Obama: "This Is What a Feminist Looks Like"

In an exclusive essay for Glamour, President Barack Obama reflected on the progress of women's rights in America and presented a call-to-action to men around the country to participate in the fight for gender parity. He also touched on the effect of outdated definitions of manhood: "It's easy to absorb all kinds of messages from society about masculinity and come to believe that there's a right way and a wrong way to be a man. But as I got older, I realized that my ideas about being a tough guy or cool guy just weren't me. They were a manifestation of my youth and insecurity. Life became a lot easier when I simply started being myself." He continued, "We need to keep changing the attitude that raises our girls to be demure and our boys to be assertive, that criticizes our daughters for speaking out and our sons for shedding a tear. We need to keep changing the attitude that punishes women for their sexuality and rewards men for theirs ... We need to keep changing the attitude that congratulates men for changing a diaper, stigmatizes full-time dads and penalizes working mothers." Talking about his daughters, he concluded, "… it's important that their dad is a feminist, because now that's what they expect of all men." Read the full essay here.

It was quite the week for Saatchi & Saatchi Chairman Kevin Roberts. Days after he was placed on leave by Publicis Groupe for controversial comments on gender diversity, it was announced that he will be stepping down on September 1. In an interview with Business Insider last Friday, he claimed that, when it comes to gender diversity in advertising, "the f***ing debate is all over." In addition to suggesting that women are less ambitious than men and therefore don't aspire to C-Suite positions, he also called out gender equality advocate Cindy Gallop, saying, "I think she's making up a lot of the stuff to create a profile, and to take applause, and to get on a soap[box]." Obviously, his appalling comments quickly spurred outrage across the ad and marketing community (read more below), triggering his resignation. On Wednesday, Roberts offered an apology: "When discussing with Business Insider evolving career priorities and new ways of work/life integration, I failed exceptionally fast. My miscommunication on a number of points has caused upset and offense, and for this I am sorry. I have inadvertently embarrassed Saatchi & Saatchi and Publicis Groupe, two companies I love and have been devoted to for almost 20 years."

@businessinsider @krconnect on behalf of senior clients everywhere thx 4 proving just how out of touch u really are. #whiteguysofadland

Senior ad men think men have nothing to learn from women. Young men in our industry disagree https://t.co/zZZomcR63p pic.twitter.com/sdkjJkOPkr

+ A Thank You Note to Saatchi & Saatchi's Kevin Roberts

+The Saatchi Ouster Shows Leaders Need to Be Gender Smart, Not Gender Blind

+Your Brand is More Fragile Than You Think: Kevin Roberts is Not Stupid, So Why Was He Foolish and Unpleasant About Gender Equality?

+ "There are Hundreds of Kevin Roberts in Advertising": A Senior Creative Speaks Out

After a similar announcement by Google last month for Android phones, Apple is following suit, announcing that they will be updating their emoji library to include more images of women working and playing sports. There will be 100 new emoji added in the fall when Apple releases iOS 10, including women and people of color lifting weights, surfing, biking and working as construction workers, police officers and doctors, Fortune reports. In addition, the haircut and massage emoji, which previously featured only women, will now be available in male versions. A rainbow flag will also be added, and Apple announced it will be replacing the handgun emoji with a water pistol. After facing criticisms from users and brands like Always, the new, diverse emoji will be a welcome change.

"Ghostbusters" to "Splash": Why Gender-Flipping Is the New Gritty Reboot

Jack Urwin: "We Don't Need to Be the Men Our Grandfathers Were"