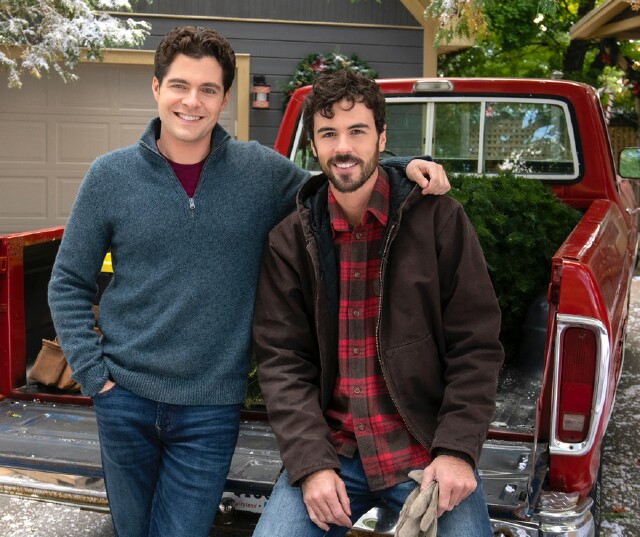 As stay-at-home orders and lockdowns continue, it's becoming evident one of the only positive things to emerge from 2020 has been the exploration of representation and inclusion on television, with major cable channels and streaming services throwing a wider net regarding diverse casting and storytelling. This weekend Lifetime proudly gives voice to the LGBTQ+ community with the premiere of The Christmas Setup, the network's first gay lead-driven, holiday themed romantic comedy. Led by real-life married couple Ben Lewis (Hugo) and Blake Lee (Patrick), the cast also features Fran Drescher (as Hugo's matchmaking mom Kate) and the couple's real-life friend Ellen Wong as Madelyn (who befriended Lewis while filming Scott Pilgrim vs. the World).

Interestingly, the couple had never considered working together before, let alone on something so important. "I don't think this is something we pictured for ourselves," Lewis (pictured top left) said when MediaVillage asked about the movie's significance. "To be honest, I think the impact, or the implications, didn't really sink in until later and the announcement [about the movie] was made online, and we saw the feedback. It's probably good that happened later, otherwise, I think we would have felt too much pressure; like the weight of being ‘the first' or something. So, ignorance was sort of bliss in this case."

"The only thing we talked about [going into this] was just how very grateful we felt," added Lee (top right). "We were nervous [because] we had never worked together and we might we have marital spats onset, and [that would be] embarrassing. Actors sometimes have to audition at home, on Zoom, so sometimes Ben and I will help each other with those, and they never end well. But from day one we had a leader in our director Pat (Mills), and it was a positive experience all around. So yeah, we were nervous, but we were able to just listen to Pat and be guided through it." 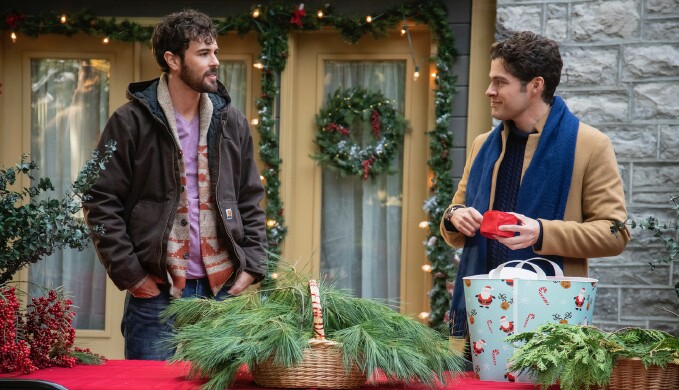 Thankfully, when it came to that all-important on-screen chemistry there wasn't a problem. "We felt we were in very good hands," Lewis explained. "Before I even read the script, I found out that Pat was directing. I've known Pat for a couple years and wanted to work with him. We read the script, it was really fun and sweet, and it was up to us and our chemistry not to screw it up. There was a certain amount of pressure to that because we've been together for 10 years, but we've never acted opposite each other. We were as curious as anybody to see how that was going to translate on-screen. But we feel good about what we did."

"The thing that I really loved about this script was there was no conflict or trauma," Mills said of the film. "Working with Ben and Blake and friends, they did the hardest part for me, establishing [that] chemistry. They're married, Ellen is friends with everybody, and it all made my job so much easier because we didn't have to manufacture anything. And with Fran involved … she gets along with everybody. It was this warm family. That was important to have on screen, and totally different from anything I've done before.

"I'm cynical about Christmas," he continued. "I came out at Christmas, so I have this strange association with [it]. But this, I just wrapped my arms around it. I listened to Christmas songs while directing and watched about 10 Lifetime Christmas movies to research what I was getting into. I also wore a lot of red and green sweaters."

"We were really pleased to know that there was so much queer representation behind the film as well," added Lee. "We had [our] producers, our writer, our director. Everyone was working really closely with GLAAD, so we felt like all of the boxes that needed to be checked were by a lot of different people. Then a week later, we found out Fran had signed on. We were driving when we found out and almost crashed the car. We just knew that the LGBTQ+ audience would freak out as much as we did!" 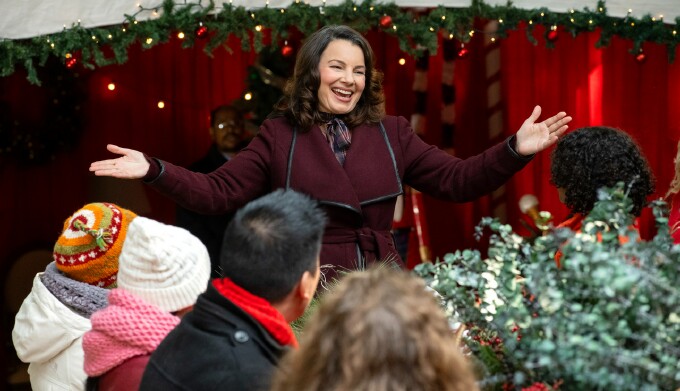 For Drescher (pictured above), getting the call to play Kate couldn't have come at a better time. "I love Christmas and anything that is feel-good and spreads joy," she shared. "I was in lock down for months, nothing but me and my dog. Then out of the blue Lifetime called saying, ‘Do you want to do this movie? If so, pack your bags, you're going to Canada in a week.' I got my negative COVID test, work permit, then busted across the border with my pup. It was wonderful because I was beginning to feel scared about the outside world and that's not healthy. It was an amazing, beautiful experience and it was great to celebrate Christmas in September with such a dear and lovely group of people, otherwise I would have been by myself."

"Anytime you get to work with your real friends it's a 'yes,'" said Wong. "I found out about the movie before my agents called me. Ben and Blake texted saying, ‘This deal's coming in' and I would get to spend Christmas with them. Knowing a lot of people from the LGBTQ+ community [were involved] was something I felt was needed for this and to support authentic storytelling.

"I was happy to be part of Lifetime's first LGBTQ Christmas film," she added in closing. "It's a film about a family and loved ones coming together that doesn't play on stereotypes or anything like that. It's about humans that love one another [coming] together to celebrate Christmas. That's what it's all about and we had the best time."

The Christmas Setup will be telecast Saturday, December 12 at 8:00 p.m. on Lifetime as a part of the network's It's A Wonderful Lifetime programming event.