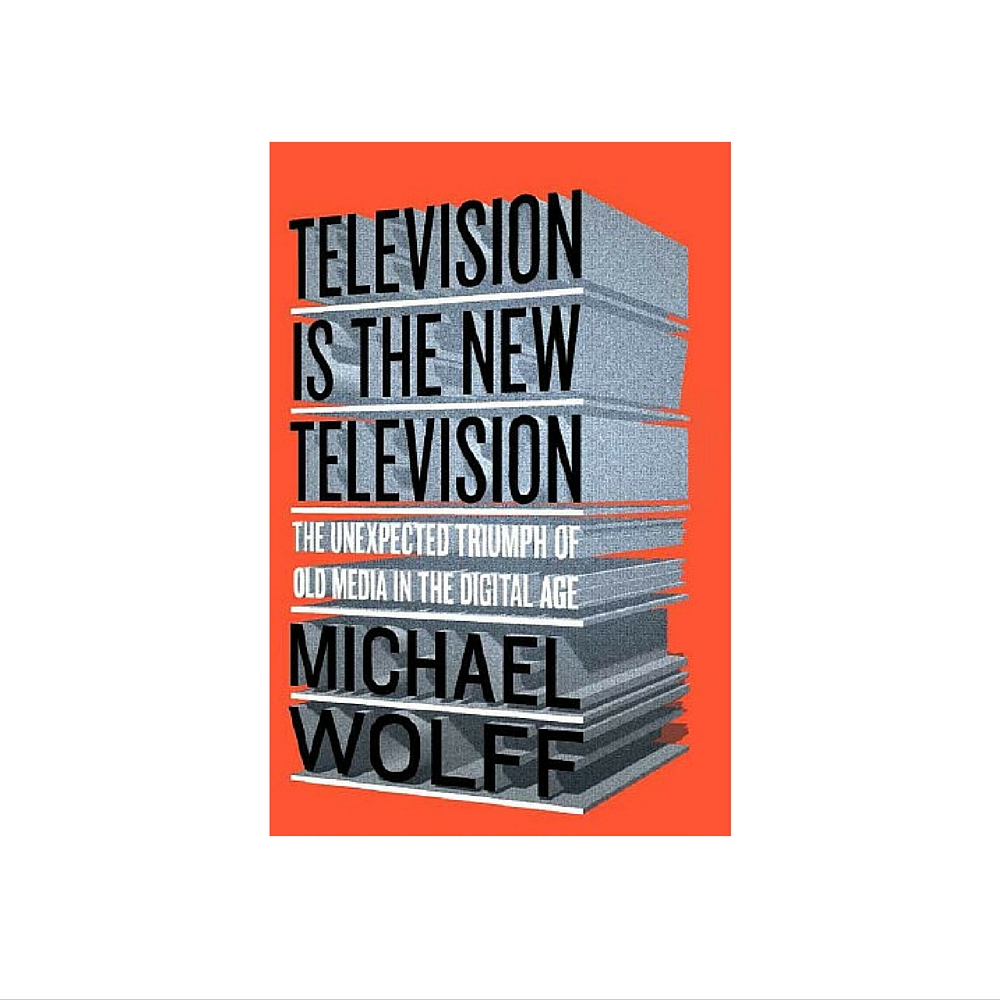 Television is the new television, or is it?

This past summer, author and journalist Michael Wolff’s new book Television is the New Television: The Unexpected Triumph of Old Media in a Digital Age hit the shelves. Connor Zickgraf, Charlotte Lipman and Philip Goldsmith of MediaVillage weigh in.

Connor Zickgraf:  Brilliant Marketing and a Bit of Nostalgia

While reading Michael Wolff’s Television is the New Television, I was transported back to my days as an NYU student -- to having similar debates about the past, present and future of the industry in my TV-focused classes. Hats off to Prof. Evan Shapiro. He was a much better teacher than the ever-snarky Wolff. Even so, Wolff’s book is a nice snapshot of where the industry has been and where’s it’s heading, although his most salient points are often lost in overly lengthy sentences and the book’s muddled organization. Instead of a controlled and polished narrative, Wolff’s prose reads more as a collection of essays often interrupted by distracting tangents and an underpinning pretentiousness that’s hard to ignore.

But that’s not to say that Wolff doesn’t know what he’s talking about, at least for the most part. If you can get over the snags mentioned above -- and the skepticism that accompanies reading anything by the man everyone loves to hate -- you can certainly find value in his conclusions. Not to mention a crash course (if a somewhat convoluted one) on topics like programmatic, net neutrality, the decline of print media and the rise of Silicon Valley.  His claim, “television is the new television,” is seemingly illogical, and yet, by the end, it’s quite sensible, thanks to Wolff’s walkthrough.  He points out that, looking at television’s still-significant ad dollars and subscription revenues, digital companies like Netflix, Amazon and even BuzzFeed are entering the TV game. It’s not that television is going digital; digital is going television and chasing higher profits.

As a final thought, I think a shout out to Wolff’s marketing team is much deserved. Everything about the packaging is provocative -- from the counterintuitive claim of the title to the “praise” on the back cover, or rather the list of his critics’ most biting remarks. Anyone who makes a point to spotlight degrading comments like, “Possibly the bitchiest media bigfoot writing today,” certainly has some balls -- and he’s got our attention.  Whether we’re laughing or cringing at such cheek, Wolff reminds us that our most-cutting criticism is only feeding into his marketability.

"Television is the New Television" is a thesis not often observed by journalists heralding death to legacy media. Michael Wolff is, among other things, the exception. Wolff's book, though convoluted in its presentation and probably better sampled over time than read in full, presents a solid argument -- the digital media model is not all it's cracked up to be (read: not profitable).

The economics indicate an eventual race to the bottom as pressure mounts from all sides. Content that can be unleashed unlimitedly across digital spheres leads to a decline in quality. That decline, in turn, leads to a decline in the value of the audience, which leads to a decline in CPMs. While Wolff argues that digital is hardly resolute, there is not quite as strong a case for television, which is no longer “old media” and suffers by being referenced as such in Wolff’s title. (Also, food for thought, maybe Wolff should write a follow up on that most resolute medium, radio).

And yet, as a “digital native” Millennial who wrote this review after watching two hours of network television (live, not DVR-ed, FYI), I found that it did resonate. While reading I kept returning to a fitting industry allegory -- grade school, that time when everyone is seeking to be "cool" and hang with who is "cool" but is ultimately unclear on the very definition of "cool." Digital, actually, may not be so cool. "Television is the New Television" may be at risk of marginalizing some digital players but it's time the industry stopped sipping the proverbial Kool-Aid.

“Americans spend the vast majority of each day staring at, interacting with, and deriving satisfaction from glowing rectangles,” proclaimed The Onion in 2009. The satire is fast becoming reality and those rectangles are increasingly showing video content. It’s an evolution that Michael Wolff explores in his book Television is the New Television.

His central argument is that television has survived, and in some respects flourished, through the digital content revolution that was supposed to make it more and more irrelevant. Indeed, the opposite is arguably happening. The sheer quantity of written content on the Internet competing for a finite and increasingly fickle audience is proving harder and harder to monetize. Video, particularly premium video, is fast becoming the content with the best financial returns.

Digital upstarts like Buzzfeed and Vice that find themselves trapped in the high-traffic, low-value content cycle are piling in to video content, as are traditional print publishers like Hearst. Even Rupert Murdoch, a consummate “newspaperman” who Wolff notes “has never really watched television” saw the value of the medium, and News Corp. went on to become one of its biggest players.  Furthermore, digital disruptors like Netflix, Hulu and Apple are discovering the true value of an old television industry model -- the licensing deal.

With the help of his trademark snark and copious colorful metaphors, Wolff barely hides his disdain for the hubris of Silicon Valley and the fact that it has so far failed to kill off television the way it eviscerated traditional newspaper, magazine and music businesses.  “Television has remained … television,” he says.

In his zeal to prove a point, however, Wolff too often compares micro trends with macro trends and cherry-picks examples to support his arguments. The portrayal of traditional print and digital media purely as low-value junk ignores the fact that some successful business deals are emerging in the publishing sector, for example. The dumbing down of TV news is largely ignored, as are the struggles of the movie industry. The evolution of the book industry, which is arguably the equivalent of much of the new, premium TV that Wolff extols, is completely ignored.

The result is an entertaining book that gives fascinating insight into the cultural, technological and business changes that television and the wider media industry is undergoing, but fails to convince that television being the new television is anything more than a phase in a long, ongoing transformation process. If the last 20 years of the Internet age have proven anything it’s that bold predictions about the future of content and consumer trends are futile. A more apt title might be “[TBD] is the new television.”