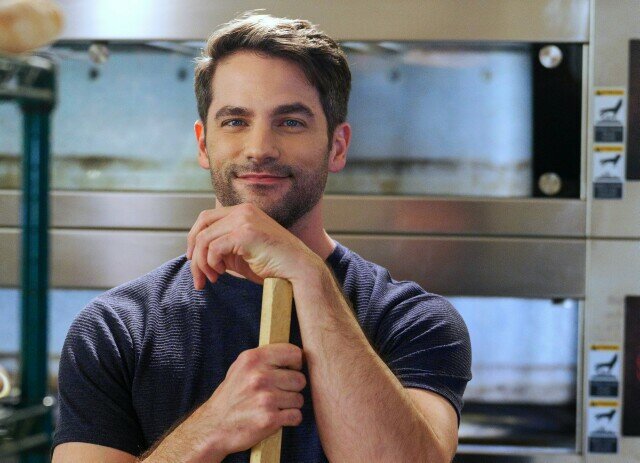 Actor Brant Daugherty returns to Hallmark Channel this weekend starring opposite Eloise Mumford in The Baker's Son. Much has happened for Daugherty since MediaVillage welcomed him to the Crown Media fold in November of 2018 (when he starred in Mingle All the Way opposite Jen Lilley). Most notably the dashing star became a new dad to baby Wilder, who was born while he was on-location filming. "He just turned two months old," beamed the elated father during an exclusive interview. "We had sort of planned things, and the lockdown happened. So, we were like, what better time are we going to have? Then as soon as he was born things started roaring back to life.

"We were about six weeks out of the due date when I got a call that they had [this] movie for me," he continued. "I'd be leaving in a week, for a five-week shoot, so that's six weeks. My wife and I talked it over and [decided] that I should do the movie. We were hoping that he would come a few days after his due date, so I'd make it back in time for the birth. I don't want to say 'unfortunately' because I have an amazing son out of it, but he didn't wait for me. I was in Victoria, B.C., filming while Kimberly was in Los Angeles giving birth a week early. I missed it.

"It was one of those things I had to make my peace with before leaving," he added. "We knew it was a possibility, but Kimberly had her family to help and take care of her, so I knew she was in good hands. It was a bummer, I'm not going to lie, and it was very hard to focus on set that day. I was on FaceTime with her every moment I wasn't working." 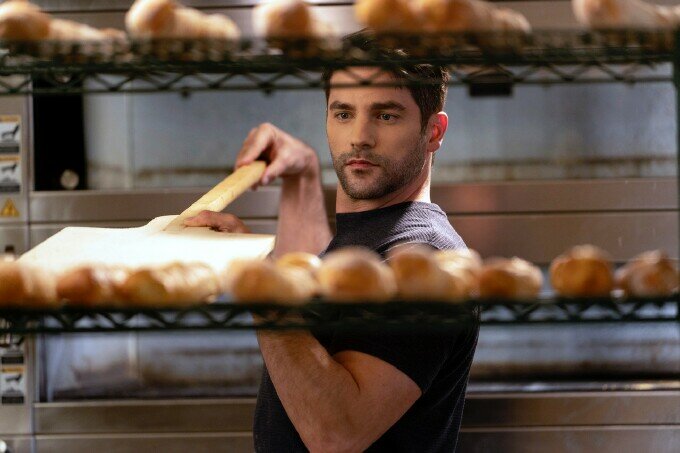 In The Baker's Son, Daugherty stars as Matt, a small-town baker longing for love and to be as proficient at his chosen profession as his father. However, everything he creates seems to be lacking a secret ingredient. Enter Nicole (Maude Green), a visiting ballet dancer, who enamors Matt and inspires him to take a different approach. His baked goods subsequently become a sensation. But when Nicole leaves town so does his inspiration. As the locals attempt to match him with a new muse, there's only one person they don't consider, his best friend Annie (Mumford), who has been a constant source of support.

Sharing the screen with two lovely leading ladies, along with the movie's unique story, eased the pain of missing his son's birth – at least a little. "I really have no complaints there," he laughed. "Both were a treat to work with. Maude is a dancer and is amazing. Eloise, I've known for about five years as we did Fifty Shades Freed together and shared one small scene. We'd stayed in contact and she's always somebody I like to talk to. We could build our on-screen relationship from that, so it was lucky we knew each other

"Initially reading the script, I thought, 'This really is Matt's story,'" he added. "We get into his life, his father, and he's the driving force of what happens in the movie, which was appealing to me as an actor. But they threw a curveball at me … introducing a second love interest! That was a nice twist, as it kept the formula yet tweaked it in a fun and innovative way. I liked that Matt is optimistic, always positive, and wants people to look on the bright side, even when he doesn't feel that way himself. It's what helps him connect."

Daugherty also got to reconnect with some of the baking skills that he, like many, developed during the COVID lockdown. "I'd say I dabbled, mostly in desserts, because that's where my head was at during most of quarantine," he revealed. "But not to the extent my co-star Eloise did. She actually started legitimately baking and became quite good at it. She carries starter dough around with her whenever she goes on set to keep up with it. Still, I made a pretty mean carrot cake from the Milk Bar Cookbook, and a nice Key Lime pie, so I did a little bit.

"But I'll defer all the credit in the film to our master baker who worked with me," he confessed. "He's an amazing German man who has 40 years of experience. In a three-hour rehearsal he tried to instill all of his knowledge, so I learned how to fake it. I'm lacking some of the fundamentals, but we made a pretty mean baguette that I got to take home with me!"

Since becoming a father, Daugherty says that in addition to daddy duties work has kept the family busy. He and Kimberly wrote, produced and starred in a Christmas movie last year, and are currently working on a movie set to shoot in Chicago next month. "It's going to be my directorial debut," he said. "And it's another we wrote together that Kimberly also has a role in.

"We'd love to do a Hallmark movie together," he added in closing. "But you'd have to talk to Hallmark, and maybe put in a good word for us. It's an honor to work for them. The fans are so attentive and kind. With some of the franchises I've worked on, I've seen the negative too, so it's always a treat to be a part of Hallmark. It's a wholesome experience, and something I'm happy to share with my child."

The Baker's Son is telecast Saturday, June 12 at 9 p.m. on Hallmark Channel as part of their annual Summer Nights programming event.