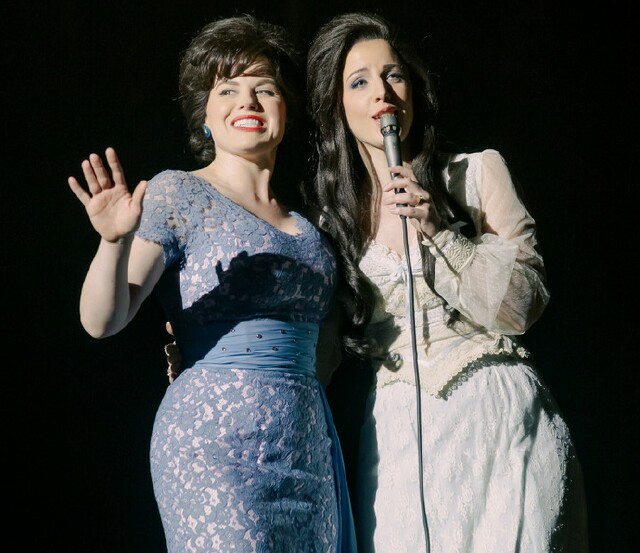 This weekend Lifetime explores the little-told story of the real-life friendship between two of country music’s greats, Patsy Cline and Loretta Lynn, with the premiere Saturday night of the biopic Patsy & Loretta.  The true-life friendship of these two legends began long before Lynn joined the ranks of country superstars and Cline paved the way for women in country music.  Both have previously received big-screen biopic treatments -- Cline in Sweet Dreams (1985) starring Jessica Lange, and Lynn in Coal Miner’s Daughter (1980) with Sissy Spacek.  (Lange was nominated as Best Actress for Dreams, while Spacek won the Oscar for Daughter.)  In an interesting turn, Broadway royalty was enlisted for the leads in Patsy & Loretta:  Tony nominee Megan Hilty, as Cline, and Tony Award winner Jesse Mueller, as Lynn, transform themselves into the legends.

Both actors decided to stay clear of the previous productions about Cline and Lynn when embarking on the project.  “I never watched Sweet Dreams as I never wanted to see someone else's interpretation of Patsy,” Hilty (pictured at top, left) told me during an exclusive joint interview with MediaVillage.  “I understand it's a fantastic film, but I decided to not watch it till after.  There's no footage of Patsy, other than performance and some home movies where she's painting her nails, so a lot of it was filling the blanks.  I was afraid watching someone else's interpretation would influence me, so I preferred to go off the information [provided] and source material.”

“I did watch Coal Miners Daughter, but I waited a long time,” Mueller (pictured at top, right) said.  “I wanted to read the book it's based on first.  It's a great read and proved super-informative, so I held off watching the movie.  I’ve been through this process before, doing the Carole King musical [Beautiful, on Broadway, for which she won her Tony], and I didn't get to meet her until later, so I am praying it has a similar effect.  It's nice to be able to bury yourself in the work and then ask, ‘What did you think?’  But I heard Loretta liked the movie.

“I was brought into the project late,” she continued.  “So, my prep time was minimal, and I had to really figure it out.  I wanted to watch what information the film covered and weirdly, I felt it freed me up after I saw Sissy Spacek's brilliant performance.  She did it right.  The beautiful thing about her performance was the authenticity that came across.  I hope the tried and true country people watching [this] buy what I was doing, and it doesn't feel put on.  In a weird way watching it made me feel like I could do it, too.” 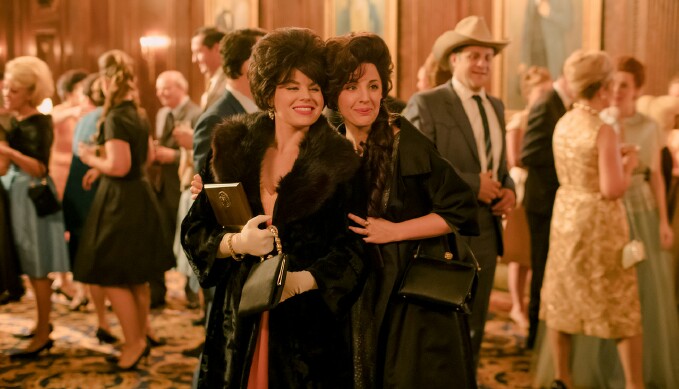 For both actors, who only knew each other socially, becoming friends at the start was crucial to the project.  “Well, [friendship] is the story,” laughed Mueller.  “It was almost like we went on a date.  Before the film, we were always going for the same parts.”

“We had met before, and there was this fierce competition,” Hilty added with a smile.  “But we totally went on a dinner date and it was super romantic.  It was just so easy, it was fun, and it all clicked pretty quickly.  Now she will never be rid of me!”

Indeed, the entire production was geared toward the two actresses bonding, just like the characters they play.  “We had that first hair and make-up test, and the gals in the make-up trailer were so instrumental in that,” Mueller recalled.  “The vibe of the crew and the energy on set, [executive producers] Callie Khouri and Neil Meron, it was just all-good energy all around.”

“Even if you were having a hard day, you didn't want to be the pill bringing it down,” added Hilty.  “The whole experience was wonderful.  One of my first questions, when I got the call about the movie, was, ‘What is happening with the wig situation?’  I firmly believe this film could have lived or died by the wigs.  Like any production, if it's bad, you are going to notice, and if it’s good, you’re not going to notice it and you’ll just be able to watch it.  Not to be superficial, but it would be distracting if the hair wasn't big enough.”

“It was fun watching each other be transformed,” Mueller said.  “I remember the wig mistress saying to us, ‘It's a tricky thing with a period film that you can't go period enough.’  She thought a lot of people didn't go period enough, and it's a mistake not to as you have to go there, set the tone, then maintain it.”

Thankfully the film does just that, and its sepia tone creates a warm and enticing environment for the viewer.  “I normally have a really hard time watching myself and not picking everything apart,” revealed Hilty.  “But this was the first time I have watched something I have been a part of and purely enjoyed it.  Everything is just done beautifully, and I don't look like myself, which helped.  It was like, ‘Oh, look at the lady.’”

“Yes, that did help create some distance,” agreed Mueller.  “I felt similarly.  We'd seen a cut of the trailer, and clips here and there, which were a little more jarring.  I wasn't fearful going into this, but I did feel a little precious about it, as it was just so fun to do. Every day was a joy.  I desperately wanted it to be as good [to watch] as it was to make.”

“We really wanted to watch it together for the first time and we did,” shared Hilty.  “That was special.  It was, of course, daunting to sing those [iconic] Patsy songs, but the heart of the film is the story of two friends who just happen to be massive musical icons. Whoever came up with the film’s tag line, ‘Friends First -- Legends Second,’ that's it!"

“It was daunting in all the right ways,” interjected Mueller in closing.  “They are legends, so we should be daunted.  And now [Megan] and I have cemetery plots together, so that will be on our headstones.”

Patsy & Lorettawill be telecast Saturday, October 19 at 8 p.m. on Lifetime.