Bruce Campbell: From the "Evil Dead" Guy to the Hallmark Guy in "One December Night" 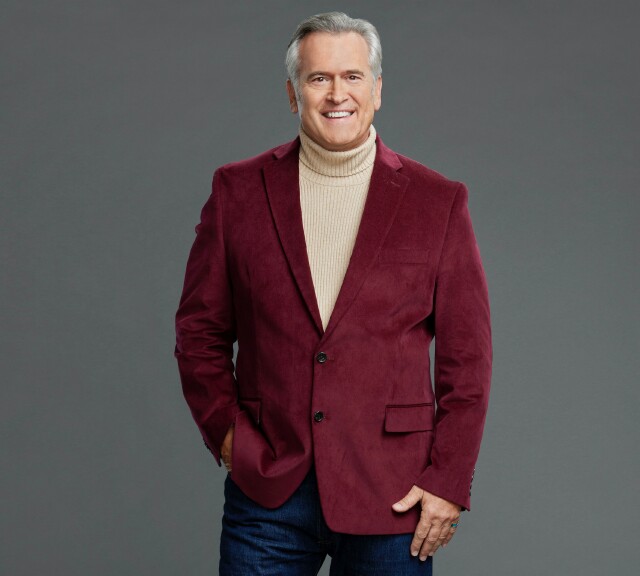 You wouldn't necessarily think that Bruce Campbell and Hallmark Movies & Mysteries would go hand-in-hand. For years, Campbell's name has been synonymous with blood and gore courtesy of the Evil Dead movies, and its dark comedy TV spin-off Ash vs Evil Dead, which ran for three seasons. However, this weekend all that changes, as Campbell makes his Hallmark Movies & Mysteries Christmas debut in One December Night, co-starring Peter Gallagher, Eloise Mumford and Brett Dalton.

On closer career inspection, there isn't a film or television genre the actor/producer hasn't dabbled in, doing everything from westerns (The Adventures of Brisco County, Jr), sci-fi (Time Quest), drama (Burn Notice) and video games (as a successful voice-over artist). He's even dabbled in Disney, starring opposite Herbie in The Love Bug(1997) and as the voice of Mayor Shelbourne in 2009's Cloudy with a Chance of Meatballs. So, when he had the opportunity to add Hallmark to those extensive credits, he didn't hesitate. "I hadn't yet cracked the glass ceiling of Hallmark, and acceptance into the 'pop culture holiday' thing," he laughed during a recent exclusive chat with MediaVillage. "It was fun, and I can't wait to do another one. 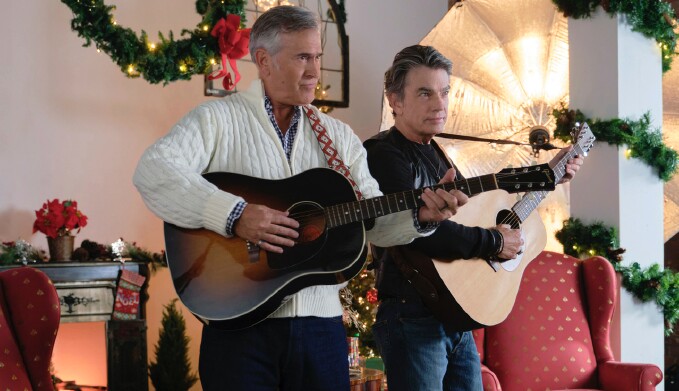 "I'll be honest with you," he continued. "It's the type of work, that at this point as an actor, you just like having scenes with other good actors in a good story. It [was] time to put the chainsaw down and pick up a guitar. That's where I am in my career now. I mentioned to a filmmaker friend that I was doing a Hallmark movie. [He] doesn't like a lot of modern movies and normally bristles at anything, but he said, 'Let me tell you, Hallmark plays by the rules.' What he meant was, they create a problem, address the problem, and solve the problem.

"They make you care about the characters," he added. "Put them through some stuff and see what happens. My friend then said, "Nine out of 10 times when a Hallmark movie is over, you feel better, and they're remarkable at that." I've been in movies with twist endings, dark endings, scary endings, bloody endings, lots of special effects, and it's nice to do one that doesn't have any of that."

Campbell told me he wasn't specifically looking for a holiday themed project, so when the COVID pandemic (and ensuing protocols) shut down production on some indie films, he welcomed the change of pace. "Stuff just falls off the truck sometimes," he shared. "This thing came bopping up, and because Hallmark is quite the machine, they were like, 'If you're gonna do this, we're going right now.' The hardest thing about the whole shoot was doing a Christmas movie in September. You're sweating, but hey, there's no fake blood, so it was all good. While filming I was looking at my other cast members, and I'm like, 'No, no, this is not uncomfortable, believe me'." 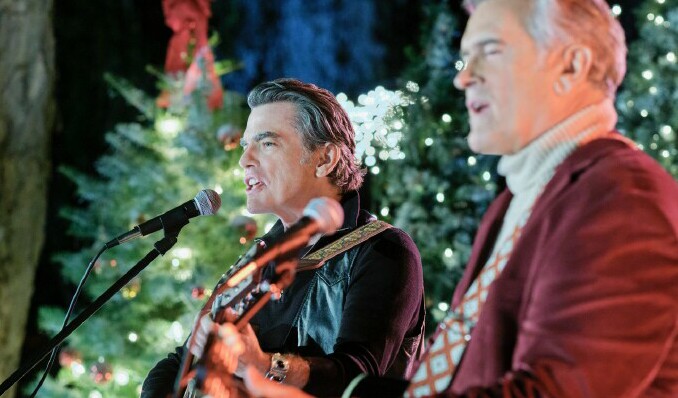 In the film, Campbell plays Steve Bedford, one half of the fractured musical duo Bedford & Sullivan (Gallagher, pictured above with Campbell), who after having enormous success splintered amidst a bitter break-up ten years ago. Enter up-and-coming music manager Quinn (Mumford), who happens to be Mike Sullivan's estranged daughter, tasked with reuniting the feuding duo for a TV special. In addition to navigating the complicated dynamics of the reunion, Quinn needs to find common ground with Steve's manager son Jason (Dalton) to create something beneficial for all involved.

Playing a member of a fractured musical duo required no research for Campbell. "I've probably read every actor/musician autobiography out there," he shared. "I've read about the multiple breakups of Crosby, Stills, Nash and Young. This relationship is a lot like those guys, where musically their harmonies are amazing, but behind the scenes, it's discord like you can't believe. Often in the arts, there's that dynamic of people not liking each other. Sometimes a volatile setup makes for good performances and chemistry. It's the same with Simon & Garfunkel, those guys did not always get along but when they sang together … how could they not work together?"

When it came to performing opposite Gallagher, who is an accomplished musician, Campbell let us in on a little secret. "They did not hire me for my musical skills," he laughed. "It's all movie magic. [Peter] is a seasoned performer whom I called 'Broadway Joe' during filming. When I learned he was playing the other guy, I was like, 'Oh. I'm good, let's do it.' But let's be clear: I actually gave him advice. He'd come to me every day asking, 'Bruce, am I holding the guitar, right?' I'm like, 'Yeah, just a little higher.' I taught him the word 'vibrato,' too. That's a musical term. His voice just didn't have enough vibrato -- it's important that we get the record straight here."

It was Campbell's playful side that kept things light on the set, especially when it came to the duo's "heated" scenes. "We had a couple of scenes where we tussle with each other," he recalled. "We kept getting dialed back. The director said, 'Too much. Hallmark needs implied violence.' You had to moderate yourself to the material and get to what I call 'Hallmark mad.' We had fun though, and I got to keep the bobble head of my character that was made for the film."

Despite a new career opportunity via Hallmark, Campbell isn't retiring his beloved Evil Dead character yet. He's voicing Ash Williams in video games to be released in 2022. And should Hallmark come knocking again, well, he's all in. "It's nice to work on something people will watch and ultimately feel happy at the end of," he said in closing. "I want to go from being the Evil Dead guy to the Hallmark guy and I think it's possible with a few more. I also did a survey; it turns out 72% of Evil Dead fans are closet Hallmark watchers -- so Hallmark, get ready for some Evil Dead fans."

One December Night will be telecast Saturday, November 13 at 10 p.m. on Hallmark Movies & Mysteries as part of their annual Miracles of Christmas programming event.