Cadillac: In China, It's a Bestselling Luxury Brand with Youth Appeal 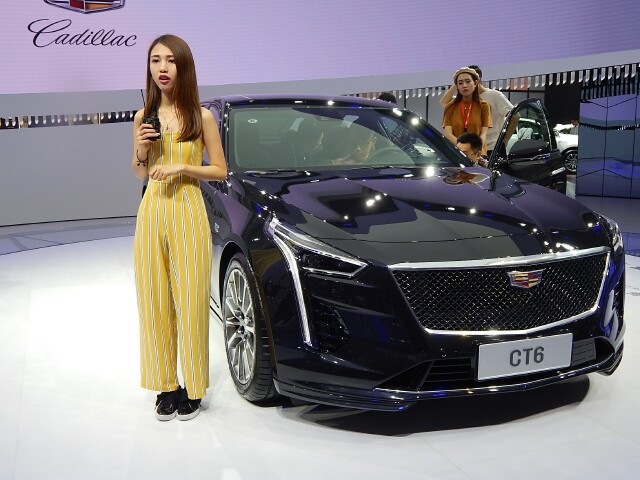 MediaVillage is pleased to welcome noted auto industry journalist Jim Motavalli as the weekly anchor columnist for our new Auto InSites platform at www.autoinsites.com.  To submit requests to Jim for interviews and auto industry coverage, contact E.B. Moss at eb@MediaVillage.com.

Guangzhou, China -- It's well known that Buick sells more cars in China than it does in the U.S., but it's amazing that Cadillac does, too.  The company had a large display at the huge 16th Guangzhou International Automobile Exhibition and a plethora of models that appeal to the Chinese love for large foreign cars, especially with room to stretch out in back as the chauffeur drives.

The key to Cadillac's success in China -- and its trouble making headway in the U.S. market -- is brand identity.  The Chinese see a fresh nameplate.  Americans think of Cadillacs as grandad's car, despite decades of the company trying to convince them otherwise.  I recently ran into a Cadillac insider who expressed just that problem in defining the company today.  I suggested, "Cadillac: The cutting edge just got sharper."  Not bad, he said.

But getting Americans to echo that slogan is hard work, even though Cadillac's lineup is actually quite youthful in orientation.  One big problem is all those sedans, such as the CTS, XTS, ATS and CT6.  Americans, as we all know, are clearly preferring SUVs, especially crossovers.  And the confusingly similar car names don't help.  The result is Cadillac sales lagging behind luxury leaders such as Lexus, Audi and BMW.

In the years before his firing last April, former Audi boss Johan de Nysschen (hired in 2014) spent $12 billion on a makeover that included trying to tie Cadillac into cutting-edge fashion trends, sponsoring art events and moving the company's headquarters to Manhattan.  "[The move] allows our team to share experiences with premium-brand consumers and develop attitudes in common with our audience," he said back then.  Brand marketing director Melody Lee added she wanted Cadillac to be a global luxury brand that "happens to sell cars."  Ads sometimes didn't even have the new models in them.  (Shades of Infiniti's introduction!)

None of this went over well in Detroit, which promptly moved Cadillac back home after the chief was fired.  If de Nysschen's approach had translated into big sales increases, he would still be there.  In 2017, Cadillac sold 156,440 cars in the U.S.  It was 182,543 in 2013, before he took over.

I toured Cadillac's large Guangzhou stand, where an XT4 crossover with a kayak on top (pictured below) helped illustrate the brand's youth appeal.  The smaller SUV is new to the Chinese market and should do well there.  Cadillac plans to open 20 new showrooms in China by the end of this year. 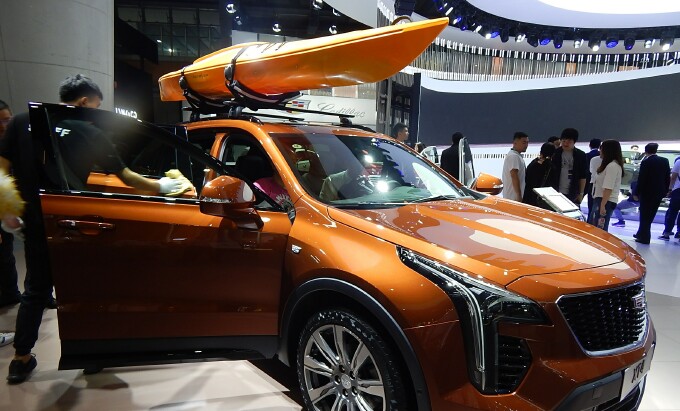 Dean Sciole, Cadillac's marketing director in China, told me that although Cadillacs are still global designs, the stylists are thinking -- a lot -- about what will work in China before introducing new models.  "This year we'll do close to 200,000 cars in China," he said.  "The buyers are very young, 30 to 34 on average.  They're buying into the American spirit.  They don't want to follow the trends of the German brands."

Cadillac launched its Chinese operations only in 2005.  "That gave us an opportunity to define the brand for a younger market," Sciole told me.  "We're No. 4 for luxury here, behind the Germans but ahead of the other domestics."  There's still a lot of ground to conquer.  Together, Audi, Mercedes and BMW control 75 percent of China's burgeoning luxury market.

It also helps that Cadillacs, particularly the Escalade, are popular with Chinese aftermarket customizers, who turn vans and big SUVs into rolling pleasure palaces with big-screen TVs, massage seats, liquor cabinets and other amenities.  Several such firms were showing their wares in Guangzhou.

Watch a movie on China Southern Airlines and a plethora of car commercials precede it.  They're short on information but long on brand definition, identifying the cars with youth and excitement.  That hasn't worked for Cadillac in the U.S., but it's hitting the mark here in China.