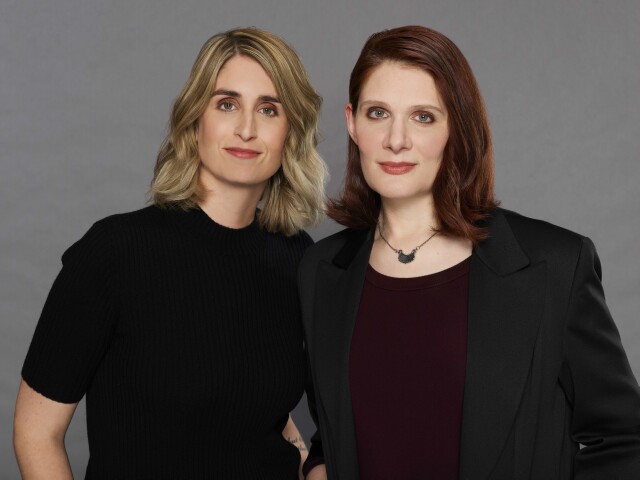 Everything about The Red Line is a little bit different.  To compete with the streamers, but unable to offer endless hours for people to binge, CBS devised an innovative way to showcase its latest limited series: broadcast two, one-hour episodes for four Sunday nights, beginning April 28.  The two women behind it, Caitlin Parrish (above left) and Erica Weiss (right), are best friends, playwrights and first-time showrunners.

Focusing on the aftermath of a murder, the series is a snapshot of the zeitgeist, both in front of and behind the camera.  The plot revolves around a white cop who kills a black man.  From the officer’s perspective, he saw an African-American male, appearance obscured by a hoodie, reaching over the counter in a bodega during what had already been reported as an armed robbery.  What he couldn’t see was the man in the hoodie was a physician who was trying to help the injured merchant.  This horrific incident rips apart families, friends and communities alike.

Noah Wyle plays the grieving widower, whose husband was slain.  Now he must rear their daughter and deal with her wanting to meet her biological mother, when he is not sure how he can muster the strength to get out of bed in the morning.

Set in Chicago, The Red Line refers to an elevated train line, and is a reworking of a play the two women had worked on.  Parrish had also written for Emily Owens, M.D., Under the Dome and Supergirl.  The Red Line is Weiss’ first TV credit.

They recently sat down with MediaVillage to discuss their careers.  What follows is an edited version of that conversation.

Jackie Cutler:  How did your partnership develop?

Caitlin Parrish:  Erica and I met freshman year at DePaul.  I saw a production of Blue Windows she had done.  My first play was produced in New York, Off Broadway at The Cherry Lane.  It was Young Playwrights Inc.  I asked Erica if she would direct the play at DePaul.  That play became our first film, The View from Tall.

Jackie:  Isn’t The Red Line based on a play?

Caitlin:  In the play, the husband dies in a car accident and he is not black.  Daniel can’t go (to his lover’s death bed, per hospital’s rules).  He sends Jira, their daughter, so he won’t die alone.  When we turned it into a pilot in 2015, the landscape was different.

Jackie:  So, you two have then been working together since college?

Erica Weiss: We became best friends through our work together.

Caitlin: And were maids of honor at each other’s weddings.

Jackie:  Was a TV show the goal?

Erica:  Originally, I imagined a career for myself as a theater director.

Caitlin: It is the first pilot we have written together.

Jackie:  Caitlin, given that you worked on several shows on CBS and The CW, you were a known entity to the corporation.  Still, to be made a showrunner -- and Erica, to be made one on your first series -- is a very big deal.  Do you think about that glass ceiling?

Erica:  On this show we were given this platform.  We were not questioned about our ability to do so.  We were partnered with a more experienced showrunner, Sunil Nayar.

Caitlin:  He is a true feminist because he is not just a mentor, but also a friend.

Caitlin:  He is the most honorable man I have ever met.

Jackie:  How did you work this as far as the writers’ room and assignments go?

Caitlin:  We had eight writers in total, including Sunil, Erica and me, one writer for each episode.  Erica and I co-wrote the pilot and the finale.  We broke the season together in broad strokes.  I stayed behind in L.A., and Erica went back to Chicago.

Jackie:  I realize six years of TV experience doesn’t place you back at the dawn of TV, but there have been some seismic shifts in the industry since you started.  What sorts of sexism have you encountered in the business?

Caitlin: I was on Supergirl with Andrew Kreisberg for whatever that’s worth. (The executive producer of Supergirl, The Flash, Arrowand Legends of Tomorrowwas fired for multiple allegations of sexual harassment.  Caitlin declined to elaborate.)

Erica:  It is rare after having a career you are proud of to do something brand new.  It’s always a reminder this is storytelling.  In general, the goal is to go in humble, but confident, that this is your show and you have to know more today than yesterday.

Jackie: What are your goals with this show?

Erica: Hopefully, the show is a truly intersectional approach for how we talk about all divisions and experiences of privileges.