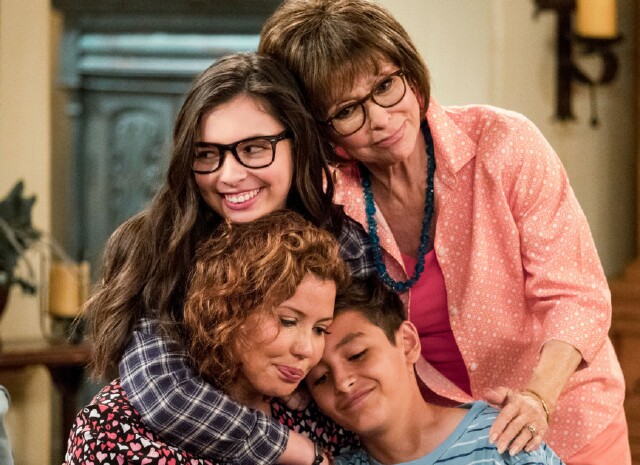 These days it is rather uncommon for a half-hour sitcom to make you frequently laugh out loud while also tugging at your heartstrings in nearly every episode.  It’s even more uncommon for the same show to seamlessly tackle a slew of important social issues and topics such as mental illness, immigration, PTSD, addiction, gender roles and sexual identity while remaining entertaining.  My editor tells me this was not unusual back in the '70s when the legendary producer Norman Lear changed the very definition of American situation comedy with shows such as All in the Family, Maude, The Jeffersons, Sanford and Son, Good Times and One Day at a Time.  So it should come as no surprise that the show I am referring to, which I consider to be one of the best on television, is Lear's own reboot of the latter -- Netflix's One Day at a Time.  Lear has been doing now what he was doing then, but since I wasn't alive then it is all new to me.  Grievously, Netflix on March 14 announced that its version of One Day at a Time -- despite a faithful and outspoken audience and much critical acclaim since its 2017 premiere -- has been cancelled.  Season 3, which dropped just one month ago, will be its last.  To which I say, esto no se puede permitir!

While a three-season run is certainly respectable, this show isn’t just another family friendly sitcom.  It means something, at least to me (and, I am certain, many others).  One Day at a Time is beloved by its audience and critics alike not only because of its humor and charm, but also its perpetual messaging of love and family, inclusion and acceptance, compassion and loyalty.

In my own household, three generations crowded around the TV to binge each season as soon as it became available, not only because it’s a great series that all ages can enjoy, but because it’s one of a handful of shows with Latinx characters at the center (along with Netflix’s On My Block and The CW’s Jane the Virgin, which has also been cancelled).  My entire household is reflected in the Alvarez family.  My nephew sees himself and his love of video games and sneakers in Alex (Marcel Ruiz).  My parents cackle at all of the one-liners by abuela Lydia -- played to the hilt by the iconic Rita Moreno -- because she is so much like their own mothers.  My sister and cousin, also single moms in the medical field, see so much of themselves in Penelope (Justina Machado) its as if the character were created just for them!

Not only are Latinx and Hispanics seeing themselves represented in a positive and relatable way, but the issues and topics that the series takes on are relatable to people from all walks of life.  Some episodes have lower stakes than others, ranging from Elena (Isabella Gomez) getting her driver’s license and abuela Lydia checking things off her bucket list, to Penelope dealing with her anxiety and handyman Schneider’s (Todd Grinnell) relapse into alcoholism.  The latter two are stories in the Season 3 episodes titled “Anxiety” and “Drinking and Driving,” respectively, and they are perhaps the darkest episodes of the entire series.  But they are also the most important because they explore issues that other series have glossed over or handled lightheartedly and unrealistically.

Looking back over the run of this remarkable show, an important topic tackled in the Season 2 premiere -- colorism -- has me thinking about the Summer 2018 Television Critics Association tour, where the One Day cast and creative team spoke at length on the issue.  The TCA audience is comprised mostly, as my editor puts it, of “middle-aged, white suburbanites” -- and they had little to no idea what colorism was or that it is a major issue in Latinx and Black communities.  A quick explanation:  Colorism is discrimination and prejudice against people of a certain skin color, and it is most common within the person’s same community.  As someone who is of mixed Hispanic and Latinx descent (part native, part European), I dealt with the issue growing up in an inner-city school, being told that I was “too white” to be considered Latinx, despite being perfectly fluent in Spanish and living in the same culture and lifestyle as my classmates.  I’m not sure if my family understood what I was going through during those years, but after watching that episode they got it.

The episode focuses on Alex, the youngest member of the Alvarez family, who while on a school field trip is suspended for punching a student from another school.  We later find out that the other student was wearing a red MAGA hat and told Alex to “go back to Mexico” (though the Alvarez family is Cuban).  Elena realizes that she has never dealt with racial discrimination of any kind because she is “white passing” and she’ll never have to face certain obstacles that Alex does because of his darker skin.  The show is certainly unafraid to get political, which one would expect with a Cuban family at the center of the show, especially with an immigrant grandmother and neighbor.

In Season 3 Justina Machado continues her hilarious, heartfelt and award-worthy portrayal of Penelope, the war veteran single mom taking care of the generations above and below her while balancing work, her love life and going back to school to advance in her career.  She’s the boisterous, tough loving mom we all need in our lives, only to be either supported or put in her place by her mother Lydia.  While Lydia’s defining qualities are her theatricality and sensuality, she frequently shares beautiful, tender moments with her daughter, grandchildren and Schneider as the matriarch of her family.

Meanwhile, the Alvarez kids have really come into their roles.  A gay teen social justice warrior could trip over endless cliches and be cringe-worthy, but Isabella Gomez has continued to keep her portrayal of Elena as fresh as ever.  The character and the actress have matured together, going from budding teen in Season 1 to the confident and headstrong young woman at what will now be the series end.  Elena has found herself in some much more mature situations, expertly handled by the writers to remain family appropriate.  Indeed, showrunners Gloria Calderon-Kellett and Mike Royce and their team often give Elena a platform to educate her family and the audience alike on topics ranging from the preferred pronouns for her non-binary partner to use of the gender-neutral term “Latinx.”

While the Alvarez family is predominantly female, Alex really comes into his own this season after he is caught smoking weed and is indefinitely grounded.  He takes on a more central role in several episodes.  For example, in “Outside” he is taught a valuable lesson on the treatment of women, not just in his family but all those around him.  In that teachable moment, we see how different the treatment of women can be from one generation to the next.  Lydia says she prefers a man who takes the initiative while Elena wants to make sure Alex grows up treating women as equals.  It was a beautiful take on the #MeToo movement and the innocent confusion it can cause, simply because we are not all the same.

Grinnell’s portrayal of the loveable hipster landlord Schneider excels this season as his character faces some of his biggest struggles.  Usually played for laughs or a shoulder to cry on, Schneider finds himself relapsing into alcoholism when he’s practically being disowned by his dad after choosing his newfound familia over his manipulative father.  He and Alex share a dark moment in a rather hard to watch scene, but it becomes the wake-up call that Schneider needs to recapture his sobriety.

At a time where we hear constantly about how much representation matters, how can a poignant, relevant and acclaimed series like this one get the axe -- especially on a streaming service so hopelessly over-crowded with content that most of us will never see much of it, and so much of it fails to break out on its own, as One Day has done?  Believe it or not, there still aren’t many such shows that revolve around Hispanics in this manner.  I’m holding out hope that another streaming platform or one of the broadcast or cable networks will give the series another chance.  It is glaringly obvious that the writers and cast have so many more stories to tell.  Netflix is doing them all a disservice, along with the Latinx community and the loyal One Day at a Time audience that has stayed with it since episode one.  In fact, we will all lose out if One Day at a Time's time has truly come.