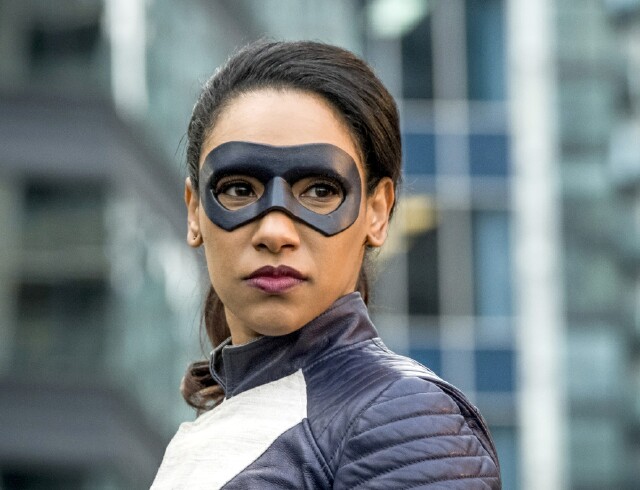 As Iris West on The CW's The Flash, actress Candice Patton has been content for the last four years working as a journalist and dishing out duties to the team at S.T.A.R. Labs and leaving most of the heavy work to friend/boyfriend/husband Barry Allen.  But all that changes in tonight's episode titled Run Iris Run, when Iris' DNA is switched with Barry's and, like it or not, saving the day becomes her responsibility.  "For the character, it was really cool, for me … it was like riding a bike for the first time," Patton recently told MediaVillage.  "There's no school for acting in front of a green screen; well, not one that I'm aware of.  I've watched Grant do it for years and kind of been like, ‘Cool for you bro, that's something I'll never have to do.’  Then all of a sudden …

"I actually didn't find out about this until shortly before we shot it," she continued. "[Had I known] I could've done some more lunges or something beforehand.  But learning to run in front of a green screen?  That [was weird] because your arms are moving, your legs are not and there is no treadmill!  God bless Grant [Gustin, pictured below left with Patton] because he gave me tips like, ‘Don't stand up straight because you will look ridiculous.’  Instead, he said to 'hitch over and do it.'  He literally gave me the play-by-play to not looking like an idiot on screen.

“He's had four years to perfect that skill and I got one episode to try and make it not look stupid,” she added.  “It was weird, interesting, fun and challenging all at the same time.  But overall it was great; I'm so happy I got to do that but I don't know if I'd want to do it every day.” 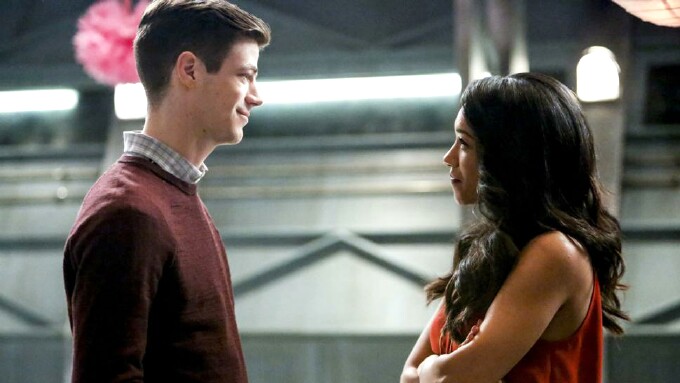 With any newfound superpower comes the obligatory superhero costume, which again provided its own complications.  "The mask [I wear] was a bit of a challenge and it kind of evolved through trial and error," she revealed. "It was supposed to be Ralph Dibny's mask, but he is a structured man and it wasn't cute on my face.  We put it on and I immediately texted Todd [Helbing, an executive producer on the show] and then trolled him all day showing photos of what I thought I looked like -- like a Minion -- until he said, ‘Let's figure something else out’ and finally we came up with the domino mask."

When it came to Patton's actual purple superhero outfit Helbing admitted that was preordained (for reasons to be revealed later).  However, she did have “a little input” in its look.  "The shoes," Patton gushed.  "I did fight for the shoes!  I called them the David Bowie shoes.  I know they didn't want me to have them because they weren't sure if it was safe.  I was like, ‘Have you seen me walking through Star Labs in the heels I wear?  I can run in some low heels.’  They were the coolest shoes I've ever seen.  I always thought it would be cool for the fans and the show to see Iris suit up, but I never wanted it to be a thing where Iris became a superhero because we have enough superheroes and that's just not who Iris is."

Costume aside, Patton has always felt Iris was a superhero.  "The most important thing about Iris as a character is she is a hero in her own right without any superpowers," she shared.  "She uses her heart, intellect and street-smarts to help the team.  I always say that appeals to the audience, that as human beings every day we can be heroes in our own lives and don't need superpowers or to be struck by lightning to do something important."

In addition to Iris getting some hands-on crime-fighting experience, the episode takes the character in a new direction; one that will be explored throughout upcoming seasons.  It also gave the actress a chance to reflect on the evolution of her character and rekindle some old feelings.  "Doing a show for four years it can sort of feel like you're doing the same thing," she said.  "This storyline reignited my love for [Iris]; not that it ever went away, just her and her tenacity and courage.  It reminded me of how big our impact is and that's something I could always use a reminder of and something that makes me excited to go to work."

The Flashis telecast Tuesday at 8 p.m. on The CW.