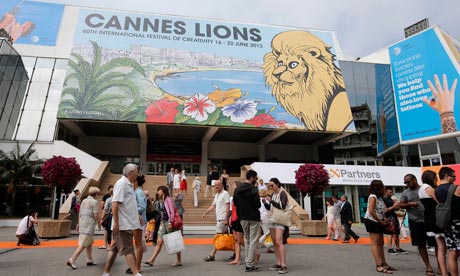 The media industry is full of synecdoche, a figure of speech in which a part is used to represent a whole. “Hollywood” stands for entertainment….”Madison Avenue” for marketing… the list goes on.

I think Cannes has become a synecdoche as well to many of us in media. It’s different than Vegas – which serves as host to so many conferences and life events that no one industry nor one person (Sinatra, Elvis, Wynn) can lay claim to it.

Cannes has become an intersection, an opportunity, and a process that links media, marketing, and entertainment to each other. I could say the Lions are about advertising, MIPCOM is about TV, and the Cannes Film Festival is about movies – but that would short change how the three interact.

With these three amazing events, Cannes has become a representation of creativity.

I left the south of France last week marveling over the continued artistry of Titanium Lion winner Dove’s marketing and chuckling over the darling of the festival, Melbourne Metro Train’s weirdly endearing, multiple Lion-winning Dumb Ways to Die campaign.

The most compelling and lasting impression is that the Lions understand that their festival is about more than awarding creators of excellent work, but about creating an environment that rewards all who attend by allowing a flexibility around what creativity means.

For example, the Lions is now a conference that embraces technology. Not just digital distribution (it used to be the digital upfront) but a place where players like Salesforce.com, PubMatic, ZEFR, and many others are welcome to claim their own piece of this “mental real estate.”

The media is even shifting its focus from the horse race of award-winners and losers to the broader story of the conference itself. USA Today ran a story this week headlined “Death and Tech: Two Hot Topics at Cannes Ad Fest.” The former was a reference to the Melbourne campaign and other contenders that featured the Grim Reaper in some way. The latter: “scores of advertising festival attendees and speakers who work in tech.”

Those executives didn’t come to go to the gutter bar (not that there’s anything wrong with that). They came for the substantial learning and meeting and discovery that now routinely take place at Cannes. For example, the NY Post made its first appearance at Cannes – covering the events on the ground and hosting a Friday “Best of Cannes” recap of the week, which showcased the “power and process of the headline.”

Companies, such as Maker Studios, came for the experience of getting together with brands and marketers that encourage and often precipitate innovations, imaginative deals, and game-changing new perspectives.

MediaLink was proud to be the creator, sponsor, and programmer of the 2nd Annual TechTalk. Whether it was Conde Nast Entertainment or Machinima on the stage, it was a format that allowed innovative “start-ups” of different shapes and sizes to have a voice.

I think it’s fitting that these presentations took place in the Young Lions Zone on the Lower Level of the Palais.

Because technology is not a strategy, it’s a foundation for expression across media.

But there’s more to Cannes than technology – there’s also people. Nothing expresses the talent that harnesses technology and creativity better than David Sable’s Friday night dinner, which itself has become a synecdoche for the collegiality and collaboration in the marketing industry.

Cannes is now more than a series of conferences. It’s a confluence of people and ideas.

With that, it has evolved into more of a thing than a place for Madison Avenue, Hollywood, and – now – Silicon Valley.