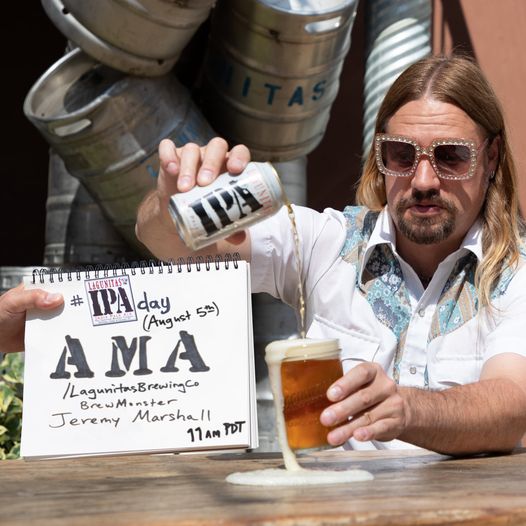 Nobody ever accused the millions of Reddit users of not having strong opinions. So, when Lagunitas Brewing Company enlisted the independent media agency Canvas Worldwide to collect ideas from the popular online community for creating a special small batch brew to mark IPA Day today, they came through.

The Northern-California-based craft brewer is unveiling a new Reddit-inspired beer, called UPDOOT DIPA. The brew will be available for a limited time at Lagunitas' Tap Room in Petaluma, CA. -- and just like the Reddit users who inspired the drink, it will have the same quirky sensibility. "The personalities of the brand definitely lined up very nicely," said Scott Ledder, Vice President, Group Director for Strategy at Canvas Worldwide. "And that was the genius for how this collaboration all came together."

The unconventional call-to-action campaign that began in June involved an engaging promoted post across subreddits -- such as r/craftbeer, r/askculinary and r/thebrewery -- asking users to put forward their creative suggestions for a new, inventive IPA.

"It wasn't just asking them for a name," noted Max Scharf, Supervisor of Content Partnerships at Canvas Worldwide. "Lagunitas wanted to know what kind of ingredients [they] would like to see. What would be a characteristic of who Reddit is? What would Reddit be … if it were a beer?"

Final touches for the beer's label design are being made, but Ledder said it would be a higher-octane brew of eight percent ABV (alcohol by volume). Its ingredients will be an "uber special massive double IPA brewed with Altus, Simcoe and Citra Hops for the karma."

The results came from thousands of suggestions, Scharf added.

"There were a lot of ideas that came through," Ledder recalled. "The Lagunitas social manager spent hours and hours reviewing and seeing what made sense and awarding Platinum to users with the best ideas."

That also meant weeding out ideas from "folks who weren't taking it too seriously or were trying to be a little too snarky," he said.

"It's not easy to gain the trust of the Reddit community as a brand, frankly," Scharf explained. "[But] Lagunitas already kind of had their foot in the door, because it is a relatable, quirky, unique, humorous brand."

Still, he added, "with every internet exchange comes trolling." On the other hand, the Platinum -- the highest level of award that can be granted on Reddit for the best contributions -- goes a long way to encourage the best ideas.

The unveiling of the Reddit-collaborated beer this IPA Day will be accompanied by a special edition of the site's popular "Ask Me Anything" session featuring long-haired Jeremy Marshall (pictured at top), the Lagunitas brewmaster who prefers to call himself a "brewmonster" in his laconic "Mouthfeels" tasting videos for various brews on the Lagunitas site. ("Don't drink this with cherry cobbler," he warns on the one for the flagship IPA.)

"If Reddit were embodied in an individual, it would be Jeremy Marshall because of that kind of zaniness and the humorous way in which he brews beer," Scharf said.

"We brew a diverse range of IPAs as a bear hug for the world," Marshall explained. "So, inviting the Reddit community on a journey to collaborate from our spice rack to the creatively named pint is a perfect celebration of the values we share."

The new concoction, initially introduced as a small batch brew, will not have wide distribution outside of the Petaluma, California, main tap room, for now.

Nevertheless, Canvas hopes that it gains enough word-of-mouth from fans to inspire a second batch by Lagunitas, the No. 1 IPA worldwide for the last 25 years.

Lagunitas Brewing Company CMO Paige Guzman said the collaboration has been a good experience. "The Reddit community provides an open-minded and creative outlet for people to express their love of beer," she noted. "This honest approach is a perfect reflection of the qualities that we hold dear as great tasting IPAs."

In five years, Canvas Worldwide has become the second largest independent agency in the U.S., due in part to work for large clients like Kia, Hyundai, Heineken, McDonald's and more. Working with a smaller client like Lagunitas, though, required finding a niche platform such as Reddit. Of course, the social media site is certainly not a limited one. It boasts more than 430 million monthly active users and 42 million daily active users (according to figures compiled in 2019).

Through its IPA Day unveiling, the new Lagunitas brew will toast what Scharf called "a very large tip of the hat to the process and the Reddit community."