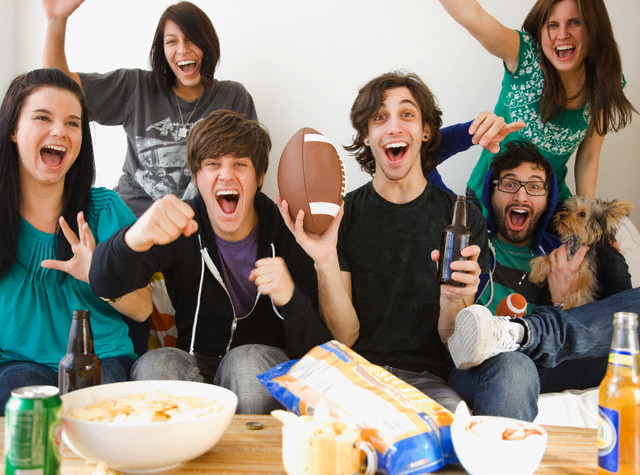 The growing influence of streaming video on-demand (SVOD) services, time-shifting and social media have all had a well-documented impact on the landscape of linear TV and the way people watch their favorite shows. Yet despite the multiple ways we can access programming, one type of programing remains DVR-resistant: sports. As anyone who has unsuccessfully tried to avoid hearing the scores of last night’s game so they can watch a recorded version later will tell you, sports are better live.

According to Nielsen’s Year in Sports Media Report 2015, sports content continues to thrive across all screens and formats and ratings and engagement numbers continue to get stronger. The amount of sports programming available to us has rocketed to meet what appears to be an insatiable demand. In 2015, more than 127,000 hours of sports programming were available on broadcast and cable TV, and viewers spent more than 31 billion hours watching sports, up 160% and 41%, respectively, from 2005.

While the rise in time-shifted viewing has altered viewing habits for nearly all program genres, live viewing remains the standard for sports. According to TV data from fourth-quarter 2015, 95% of total sports viewing happens live. In comparison, only 66% of general drama viewers watch live. In fact, sports accounted for 93 of the top 100 live-viewed TV programs in 2015, compared to just 14 in 2005. 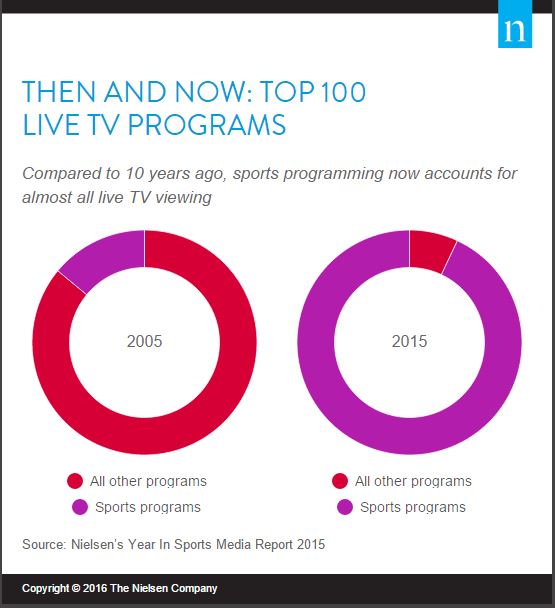 Not only is live sports consumption thriving on TV, but listening to games on the radio is on the rise as well. From 2011 to 2015, the average quarter hour (AQH) share for sports radio increased 12% (4.1% to 4.6%) and showed steady increases year over year. October 2015 saw the highest AQH share of the year at 5.5%, as the MLB playoffs, NFL and college football seasons were in full swing. According to a Nielsen audio cumulative reach study, over 30.2 million people listened to an NFL game on the radio over the course of the 2014-2015 season. 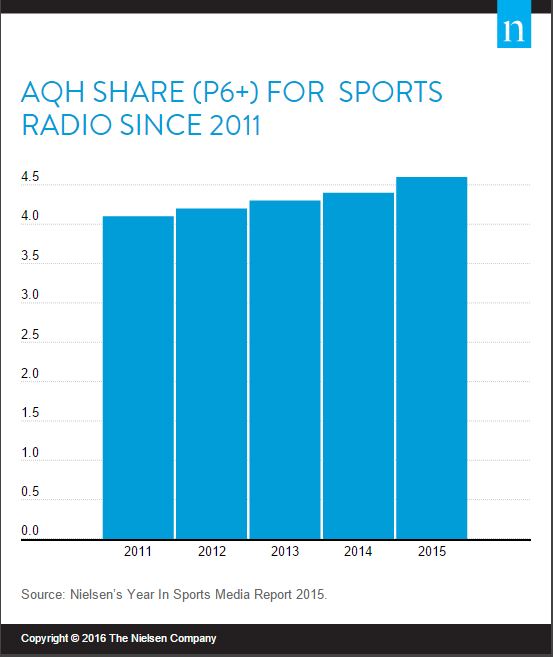 While we primarily watch live sports on TV, we consume sports news and updates across multiple platforms and much of the “water-cooler” commentary has moved to social media. In fact, while sports events comprised 1.4% of U.S. TV programming in 2015, it contributed close to 50% of all Twitter TV conversation.

Live viewing for sports feels essential too because, well, the game is usually happening live. This presents a great opportunity for advertisers. Multiple live-time engagement opportunities gives marketers the perfect way to engage even hard-to-reach demographics like Millennial cord-cutters.