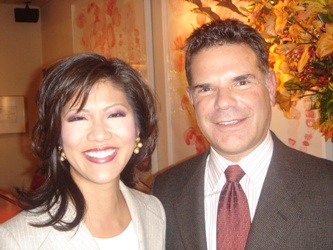 In seventh grade, Julie Chen joined her parents when they took her older sister Gladys to her first year at Wellesley College and Julie decided then and there she also wanted to attend school at Wellesley. But her mom explained to the average "B" student she'd better crack the books if she hoped to be accepted. Ultimately, Julie went west to the University of Southern California, but the New England trip was an eye-opener about college life and she became, in her words, "a geek" and high honors student at Junior High School 194 in Queens, voted by her classmates the "most intelligent and most likely to succeed."

But by the time Julie graduated from St. Francis Prep High School, the sobriquet attached to her by her classmates was "most sophisticated," and New England ivy-style colleges no longer held appeal. High school was a time of re-direction for Julie, who wrote in her school's junior yearbook that her goal was to be an anchor woman on a New York television station, and who has risen well beyond that to become one of TV's most popular personalities as host of CBS' The Early Show and, for six years running, the incredibly successful CBS series Big Brother. She's also half of one of Hollywood's most beautiful professional couples with her husband of a year, Leslie Moonves, CEO of CBS.

Julie's self-imposed life as a nerd, geek and math wizard came to an embarrassing end when she tested poorly and was not accepted for the Bronx School of Science, which both her older sisters attended. Her pride wounded, she opted instead for nearby St. Francis where she was popular but didn't date. "I even went to the Senior Prom with the friend of my best friend's boyfriend, and I was convinced I would never get married."

But Julie is also well aware of the potential conflicts. "I don't think I could deal with the guilt of not being there 110 percent like my mother was, but I also don't know if I would be happy not working. I don't know who I would be." Julie's mom and dad still live in the same small house in Bayside, Queens where she grew up, the house she still calls home. "They have had an amazing love story," Julie shared. Her mom grew up in Rangoon, Burma, where Julie's grandfather was a leading industrialist, "the Donald Trump of Burma," and her dad was born in China, where his father was one of the top leaders in the government of Chiang Kai-shek. When the Communist government forced Chiang into exile, Julie's grandmother and her six children moved throughout China "ten steps ahead of the Communists," trying to escape to Taiwan.

In one of those surreal twists of fate, Taiwan had captured a ship in its territorial waters flying a Chinese flag. In a negotiation to have the ship returned, its owner agreed to assist several families escape from China to Taiwan. One of those families included Julie's dad and his five brothers and sisters. The ship's owner? Of course it was Julie's mom's father. The family successfully escaped, going first to Burma where Julie's mom and dad met and fell in love. But the story of love triumphant doesn't end there.

Julie's dad moved to Taiwan while her mom stayed in Burma, and after college and military service, her dad left Taiwan to attend graduate school at the University of Florida. "They still have their love letters, written on those old onion skin international air mail papers," Julie smiles. Feeling settled in the United States, Julie's dad sent a college application to Wan-Ling, asking her to come to the United States. "He learned the University of Tennessee had a program that my mom would qualify for, even though she spoke very little English. She was accepted and moved to Knoxville, and my dad drove hundreds of miles from Florida every weekend to see her. When they graduated, they moved to New York and got married."

"They were classic Chinese parents. We couldn't have sleep-overs, they had to meet our friends, and I remember when Gladys was dating it was a big issue that her boyfriend was not Chinese. My dad," she adds, "also had total control over the TV. He would yell for us all to come running when he saw an Asian face on a program. We laughed, but it was a proud moment for him. When Kaity Tong became an anchor on WABC-TV, it was my version of my dad seeing an Asian face on TV. She was a real role model for me; for the first time, I realized it was okay to be an Asian female and to be a professional and on television."

Julie grew up with an incredible blend of cultural influences. "I was taught the Chinese work ethic, and that failing was not an option. My dad left the house every day at 6 AM, taking a bus to the subway to the train to get to his job (as a civil engineer) in Newark, New Jersey. He never complained. My mom made sure we went to fine restaurants and that we took advantage of Manhattan. She took us to all the Broadway musicals, the ballet, and the museums." The family also regularly returned to Singapore to visit family, and "I saw how our family lived there, with cooks and drivers and a wealthy lifestyle. My mom would tell me if I wanted the finer things in life, I would have to work hard."

Julie's parents, although traditional, also did not impose on their daughters the traditional male-female roles. "I was never able to follow the traditional gender rules; I can't be so accepting and can't just go with the flow. I need to be a decision-maker." One of her early decisions was to go to USC for college. "I wanted a big city and a school with a good broadcast program, and I didn't want to be in New York where my parents could check up on me all the time," she laughed over her Salad Nicoise as her former Early Show colleague Lisa Bernbach and lunch companion Cathy Berlin stopped by to say hello. "A letter came from USC inviting me to apply, and I thought if they want me, it's meant to be." Of course, Julie didn't realize USC in the 1980s (she was there from 1987 to 1991) was a "suitcase" school. "All my friends went home on weekends and I didn't have a car in my freshman year. So I focused on studying and on what I wanted to do, which is what I'm actually doing now."

Her first professional break came in the summer of 1989, "the summer of Tiananmen Square" she remembers, when she was hired as an intern, ironically on the CBS Morning News, the same show she now anchors. Harry Smith and Kathleen Sullivan, a USC alumnus, were anchors and Julie was disappointed she had virtually no contact with them, instead answering phones and copying faxes for distribution. She laughingly remembers her one chance to go on a live shoot, an At Home segment with Wynton Marsalis. "We set up the cameras and Kathleen did the interview from the studio. We taped a photo of Kathleen to the camera so Wynton would have an image of who he was talking to. It was the closest I got to Kathleen."

A year later, Julie got her first paid position ($9.31 an hour) as vacation relief desk assistant at ABC's Nightline. "It was the summer the first Gulf War broke out and it was a live show. It was an amazing learning experience," she says. After graduation, Julie continued to work for ABC News in Los Angeles for three years, capturing her first on-air reporting job with WDTN-TV in Dayton and quickly moving to become reporter and anchor for WCBS-TV in New York until joining the CBS Morning Newsand The Early Show.

Julie and Leslie commute between New York and Los Angeles, and although she feels at home in both cities, she considers that small house in Queens to be her true home. "It still has the smell of my mother's cooking, and there is nothing to compare to that." Those happy memories remain strong influences in Julie's life, along with her two nephews, who she loves, and her cousin's three children. "I get to be an aunt and spoil them, and Leslie is wonderful with them." As Julie smiles at the mental images of family life, it seems almost inevitable that she and Leslie will soon be starting a family of their own.