Cedric the Entertainer on Feeling at Home in CBS' "Neighborhood" 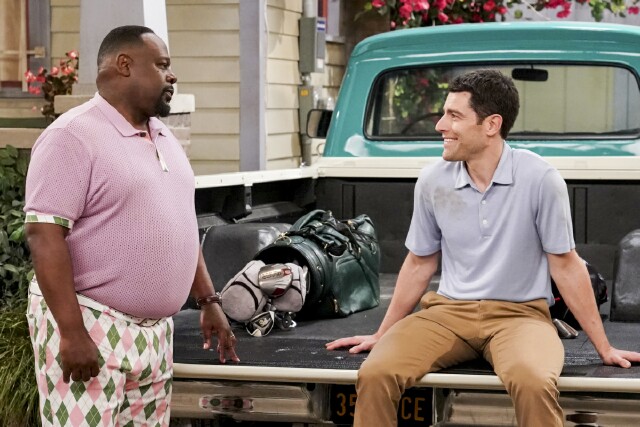 Tonight, CBS will telecast the season finale of its breakout comedy hit The Neighborhood – one of two new series launched by the network last fall that received an early second season renewal several weeks ago.  Throughout its first season, The Neighborhood opened a dialogue about gentrification and showed viewers that people of all backgrounds really aren't very different at all. For series star and Executive Producer Cedric the Entertainer (pictured at top left opposite co-star Max Greenfield), that was critical to the development and success of the show.  "The fact we are not that different was one of the key things (series creator) Jim (Reynolds) and I wanted to make sure of," he told MediaVillage during an exclusive interview. "And that we weren't doing a show that was going to show divisiveness.  We wanted to push the envelope, tell some truths, and show that the problem is people don't know each other, yet assume they do.

"We showed that if you allow yourself to get to know someone, see them for what they are, you can remove color and there's so much you can identify with," he continued.  "We all get up and go to work, deal with having sick kids, and come together whenever there's some kind of tragedy. Helping each other doesn't come from color; we could do that on an everyday basis if we just allowed ourselves.  That's what we try to teach with the show, without being preachy."

Growing up in St. Louis, Cedric learned first hand what gentrification was when his neighborhood started changing around him.  "There was this transition of what used to be the inner city that started having this migration where [people] started living life," he explained.  "They didn't take public transportation, and there were these great old homes being refurbished.  So, you started to see the gentrification.  After living somewhere for a long time, then all of a sudden [things start changing] around you and you think you own the world.  To me, [the show] spoke the truth, and it was cool for me to identify with a character that was so locked into a way of thinking."

Cedric is ecstatic that through his Calvin character, and the ensemble cast, viewers have found the humor in some of the shows "envelope-pushing" storylines, some resonating enough to warrant further discussion.  "People talk about the washcloth episode (where we discovered black people prefer using them and white people don't) and we found out in the writer's room that this was culturally common," said Cedric.  "It came up and we were like, 'Are we really putting that out there?'  But it became one of the most talked about episodes people thought was hilarious.

"Some things we are not quite ready to go there with," he added.  "We've touched on inter-racial dating, but flipped it so she was an atheist, so it was a good twist on a show we thought might go one direction to another."

Season one's finale, titled Welcome to the Conversation, promises to be no different.  "It took a lot of work to get to this point and this is an important episode," assured Cedric.  "I wanted to talk about white privilege and we tried to figure out how to do it not based strictly on race.  Dave (Max Greenfield) is in denial that it actually exists, but he has a white privilege card and Calvin wants to use it.  It's the same advantage as your dad being a chef and using him to cook whatever you want, so it's a real thing."

While many ideas are already being tossed about as to how The Neighborhood will evolve in season two, Cedric has his eye on one in particular.  "We really want to push into how the neighborhood is changing and maybe introduce a new character or two that reaffirms we really have to understand what it is when the neighborhood changes," he shared.

"I'm feeling very excited about the show," he continued.  "I've had the opportunity to do several shows, but never got to play in the big league with a network like CBS.  To have their support and have a show that resonates with so many people across the board ... the experience has been amazing.  We laugh a lot, have things to say and everyone's voice is heard.  We get the job done!"

The Neighborhoodseason finale is telecast Monday at 8 p.m. on CBS.