Celebrating CNN and Its Creator 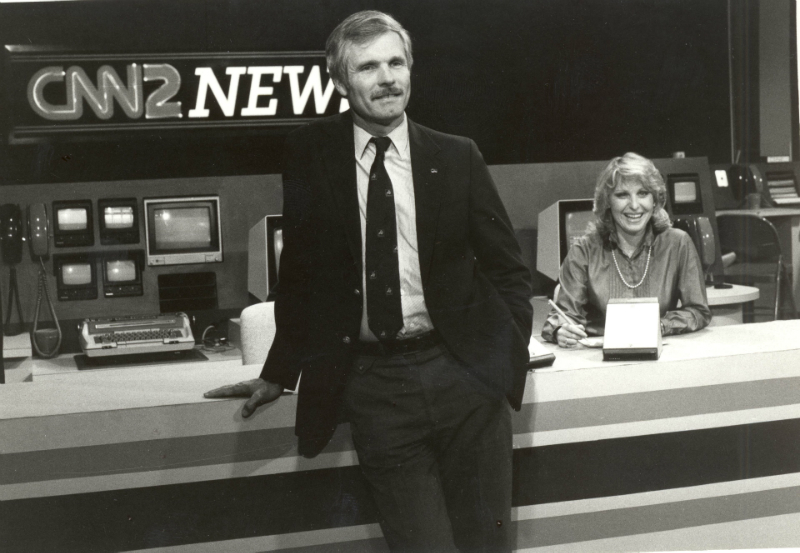 On June 1st CNN will commemorate the 40th anniversary of its initial broadcast. A truly herculean pioneering effort (with a generous sprinkling of good fortune) is recounted in detail by Lisa Napoli in the recently published "Up All Night". Napoli dives deeply into the background and psyche of Ted Turner who, we learn, despised the predictable establishment news of the big 3 networks. Decades before Tim Cook uttered the words, Turner "created something we didn't know we needed but now cannot live without". View the first broadcast here.

In a smart, easy to navigate narrative Napoli simplifies the complex history of a complicated innovation so that even non-engineers can understand why a lost satellite almost ruined CNN even before its launch. For all the fascinating insights into the shaky beginnings of CNN and the early years of cable TV and satellite transmission, the author left a void for marketers who experimented with this new medium as it struggled to become mainstream. As interesting as it was to learn of the production hires and fires of CNN from startup to global leader, the downscale culture of predecessor WTCG (wrestling anyone?) and Turner's obsession with yachting, I kept waiting for a chapter on Ted's unique ability to woo advertisers. Like so many media buyers at the time, I was on the receiving end of several original 'Ted Talks' before Richard Saul Wurman created the Technology, Entertainment and Design conferences we know so well today. As CNN was evolving, Turner could be found in many an ad agency conference room, casual clothes, cowboy boots, spit cup in hand ready to catch a stream of tobacco juice. The sales team was always at the ready but it was Ted's show.

Ted didn't like me. I counseled my Alcoa client to take a 'wait/see' attitude until we could quantify CNN's viewership. (Early on, cable viewing was so low, there were no Nielsen numbers.) Ted won the battle of the commitment, but I won on the amount. I was able to hold my client's spend on this novice idea to about $90,000 (as I recall) – a major win. Ted made several visits to Alcoa's headquarters in Pittsburgh – each notable in its own right. Once, he was keynote speaker at a monthly Pittsburgh Ad Club luncheon. After his off-the-cuff talk (no notes) at the Allegheny Club inside the sports stadium, I recall a questioner asking Ted, "How did you make your first million?" Ted looked skyward, pretended to search his memory, and then proclaimed with a chuckle, "Oh, I inherited it!" On another visit to Alcoa, my client hosted Ted in the company's luxury suite for a Pittsburgh Pirates baseball game. I don't recall if the Braves were in town that night. Ted's excessive drinking was historic (as Ms. Napoli recounts in the book) and he did nothing to attempt to change history that night. Eventually, it took 3 of us to help him into his room at the Duquesne Club.

I respect Ted's vision and his ability to accomplish that vision. To change the course of history by mixing untested technology with business and entertainment including the unmitigated gall to risk years of hard work and success on an idea almost no one else thought could succeed – that demands respect. I never appreciated his lifestyle or his attitude but always respected his accomplishments. As he now battles Lewy body dementia, I wish him well and congratulate him for leading the way in cable and satellite transmission on this 40th anniversary of creating something we didn't know we needed but now cannot live without.

Allan is President of The Linderman Media Group, a media consulting company that has filled in the gaps in the client media function since 1996. LMG serves global, national, regional and local advertisers. Allan also helps client marketers in his role as Ins…