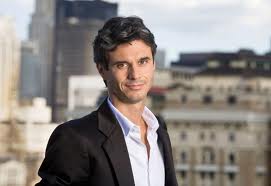 For such a modern industry, the Television Business is rife with anachronisms. Despite the addition of new technologies, new viewing patterns, new story telling techniques and new voices, many aspects of television are holdovers from the Kennedy Administration.

The Television Season was invented to coincide with the school year, which in turn was originally designed to complement the agricultural economy of two generations ago. In 1950s, HUT (Homes Using Television) levels dropped 28% in the Summer months. Now there is no measurable drop. TV no longer has seasonality, therefore a TV season that begins in September and ends in May is as relevant as a buggy whip. Since 2004, Nielsen has been able to provide Local Nightly Ratings, making the idea of Sweeps just about as useless. Yet both of these outdated relics of the medium remain.

My 'favorite' TV anachronism is the "cost per thousand" system employed by agencies and networks as the currency of our advertising economy. Don't get me wrong, I see nothing wrong with the CPM unit of sale itself. Rather, my issue lies with the outdated way in which certain 'Cs' are determined for specific 'Ms'.

In almost any other business, when you pay for 1,000 'units' the cost is determined by the individual value of each unit, then multiplied by the total number sold; $ x M = CPM. The more in demand any one unit, or 'thing', is, the higher its cost. Additionally, the more specific a buyer is about the 'things' they want, the higher the cost of those things they need or want. This is how capitalism works. Except in TV.

For some reason in the TV business, the units of TV (impressions) on Cable – the most watched programming and the most highly targeted audiences in the medium – are valued lessthan those on Broadcast – whose programming is less-watched on any given night; and whose audiences are appreciably less targeted.

As background, look at these two charts: 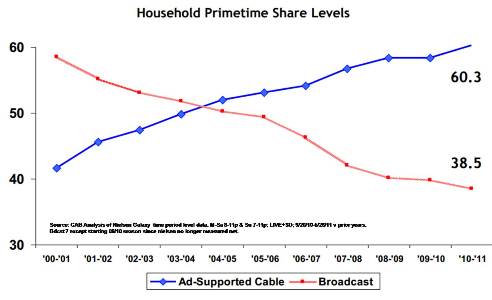 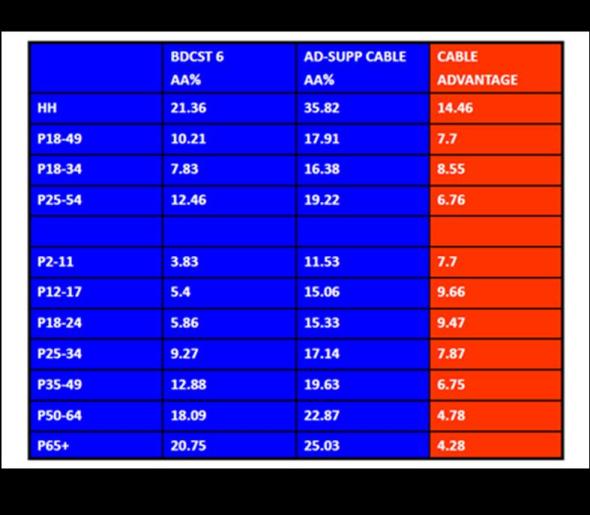 As demonstrated, Cable has replaced Broadcast as the dominant force in the medium and offers a much higher delivery of every single audience demographic. Granted, the audience of any single show on cable is usually smaller than those on broadcast (though even that is beginning to change, Walking Dead, Jersey Shore and Pawn Stars regularly beating lower-rated Broadcasters). But, as an industry, we have to realize that the very definition of a "large audience" has changed. TV Viewership is asymmetrical – fragmented by channel choice, time shift and demographic taste.

This fragmentation has caused headaches for programmers and advertisers alike, yes. But it has also allowed television to enter a golden age, where content no longer must cater to the least common denominator. Artists and channels can now tailor programming to very specific audiences, allowing for better storytelling and much more engaged and passionate viewers. TV has never been better. And nowhere is that more evident than on Cable. That is why 37% more people watch those channels every night.

And while these fragmented, time-shifted, asymmetrical impressions may be harder for an advertiser to buy – it takes more time, a more granular level of research, greater effort to build the right number of GRPs (Gross Ratings Points) – it also is far more efficient. Audiences are significantly more concentrated than ever before. Wannamaker's old trope "half the money I spend on advertising is wasted; the trouble is I don't know which half"; no longer has to be true. Fragmentation is also segmentation and segmentation eliminates the enemy of any media planner – waste. It's obvious to many – audiences, critics, Emmy voters – that Cable has made the quality of TV better. It has made the impressions we sell better as well.

Yet, the way our industry values those impressions and audiences has not changed with the times. Broadcasters CPMs average around $35, whereas Cable averages CPMs in the low to mid teens. Why?

Why are two thousand eyeballs in A Gifted Man or Blue Bloods (estimated CPMs of $35) more valuable than two thousand eyes watching Real Housewives or Pawn Stars (estimated at $15-17)? Tom Selleck's moustache? While Real Housewives does not have as many viewers as A Gifted Man, its audience is more targeted, more desirable to advertisers and way more engaged - the Housewives actually see a 127% increase in C3, versus Live viewing. Pawn Stars may not attract more total viewers than Blue Bloods, but Pawn regularly attracts more Adults 18-49 and a much higher concentration of the most desirable demos. Yes, without question, more people watch Last Man Standing and Rob! than see Louie or Portlandia (ah, America). But do we really believe that their audiences are more valuable, per person? Really?

There are many ways to spin the answers to this question, and the Broadcast networks have been doing a great job of that for years. Most often, the rationale for pricing disparity focuses on the demographics – that Broadcast audiences are more upscale and educated than cable. According to a Credit Suisse report, "viewers with higher education and incomes watch disproportionately more primetime broadcast as a percentage of total viewing hours than the average TV consumer."

That is a strong point, if you can prove it. Trouble is; I can find no current data to support that argument. (The Credit Suisse report is now three years old, and offers only anecdotal support for the claim). Yes, there are many shows on Broadcast with sterling demos (ironically, those series with the highest income and education indices are also usually the lower rated, behaving more like cable shows). But, with Cable shows like Mad Men, American Horror Story, The Daily Show, Top Chef, Beyond Scared Straight, Robot Chicken, Covert Affairs, Leverage and even Portlandia (second shameless plug), it's hard to see how that generalization holds water.

But, just for one more second, look at those charts again. As we prepare to enter another upfront (one more dear old TV chestnut), ask yourself this: are you going to believe conventional wisdom, or your eyes?

Please note: I'm not arguing that Cable should be valued more thanBroadcast. I simply propose – in a world where the engagement and quality of an audience is ever and ever more important – that we value each one thousand viewersin a similar way. This is about more than what's right or fair, it's about what's good for our business. Industries must properly adjust to market demands or they will break down. If you fail to self-correct, the market will correct for you. In other media, hyper-targeting and engagement are the most valued metrics. It is time for TV to catch up. The order is fading and the times they are a changing. In order for TV to win in the new order, we need to change with them.

As president of IFC, Evan Shapiro oversees the strategic and creative direction of the network, a distinct cable destination known for its indie perspective on what's worth watching and doing in alternative culture. Named to the position in June 2008, he has had a tremendous impact in strategically evolving the IFC brand in response to the rapidly changing programming delivery technologies and industry trends. Evan can be reached at Esshapiro@ifcsun.com.

President IFC As president of IFC, Evan Shapiro oversees the strategic and creative direction of the network, a distinct cable destination known for its indie perspective on what's worth watching and doing in alternative culture. Named to the positio…