Changing the AAPI Narrative: The Power Is in Your Brand 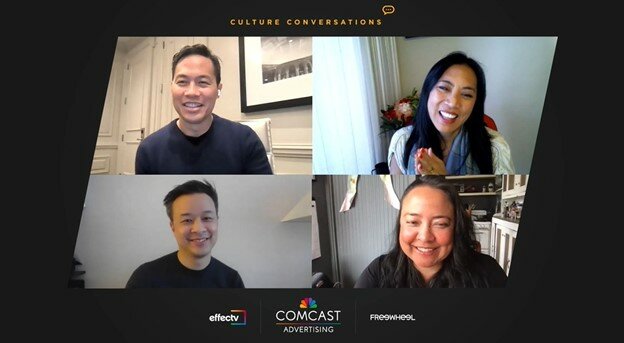 As violence against Asian American Pacific Islanders has been rising, Comcast Advertising turned to thought leaders in the media industry for a dynamic discussion on what brands and leaders can do to address the misconstrued narratives about this community.

The AAPI community is under attack: according to new data from the activist organization Stop AAPI Hate, nearly 3,800 anti-Asian hate incidents occurred between March 2020 and March 2021, with many more going unreported. Another analysis from California State University revealed that while hate crime in 2020 decreased seven percent, those targeting Asian people rose by nearly 150 percent. The reason behind today's violence is no secret, but when combined with an historical internalized racism, embodied by the "model minority" myth, it has created a harmful identity representation where the AAPI community is both sometimes invisible and at the same time misrepresented.

This is where the media industry can step in. Thanks to the hard-earned groundwork laid in 2020, social equality and racial justice have taken the center stage with many companies and brands proactively acting upon the violence, spearheading media production and collaborations between influential Asian individuals and groups, along with public campaigns like Love has No Labels, Wash The Hate, etc.

With the goal of exploring the nuanced issues and opportunities for improvement in the marketing community, Comcast Advertising's Culture Conversations webcast series unites industry experts and thought leaders to share insights on a range of topics related to diversity, equity, and inclusion. Previous episodes have leaders focusing on long-term support for the LGBTQ+ and Black communities, along with discussions on how brands can be proactive and authentic while supporting these notable and essential causes.

In the most recent episode, MSNBC anchor Richard Lui (pictured top left), moderated a discussion centered around the AAPI images in entertainment, advertising, and branding. The panelists comprised of leaders in the media industry including the TV and movie writer Eirene Donohue as well as Association of National Advertisers' Executive Vice President of Community & Growth, Elliot Lum. The panel focused on the power that individuals and brands currently hold in the media industry and how both can help correct currently flawed representations and be better allies.

Exploring the current issues, a common theme raised in the discussion was isolation. Considering that the pandemic has been a shared experience for all and theoretically we should be closer as a collective community, there has been a conflation of the virus with race. This has led to the Asian community being singled out as the one to blame for the challenges that we have all faced in the last year. Lum recalled his experiences of isolation as an Asian American living in his country of citizenship, and sees it playing out within the boardroom, where he recalled an Asian American marketer say at ANA's Asian American networking event: "I always thought I was alone until I saw all of you."

Eirene Donohue, writer of the movie A Sugar and Spice Holiday, attributes COVID-19 as a catalyst for recent attacks but also noted deep-rooted systemic beliefs about the AAPI community: the perception of AAPI individuals as foreigners and the model minority complex. Richard Lui agreed: "the majority of these stereotypes are cloaked in strength, but in reality, it represented weakness." But to correct the current falsehood, is it really about erasing the current narratives and stereotypes? The panelists agreed that it's not about striking a word, but instead expand the vocabulary. "Don't strike model minority. Use it in a way to inform them about these internalized biases and break it down so they will not act on those beliefs," said Eirene.

Expansion was a common thread that carried through the conversation, with all panelists unanimously agreeing that when it comes to solutions for brands and individuals, it's all about driving diversity of knowledge and greater representation of the AAPI community. For individuals, it's the constant self-education and advocacy needed to share the same social justice values that each consumer has in their power to make choices about the brands and media they engage with. For the media industry itself, while Eirene emphasized the normalization of new Asian identities beyond existing stereotypes in movies, I reinforced the power the media industry has in humanizing the Asian community. It's that simple: getting more representation around universal, humanistic stories that impact everyone to show that there is more in common than less.

Stay tuned for upcoming episodes by following Comcast Advertising on its social media channels (LinkedIn, Twitter). You can watch the episodes described in the aforementioned video player below.

Dawn Lee Williamson is Head of Sales Development at Effectv, a Comcast company reporting to Pooja Midha, Chief Growth Officer of Comcast Advertising. Sales Development is a new division that will accelerate the company’s move to audience delivery acros…