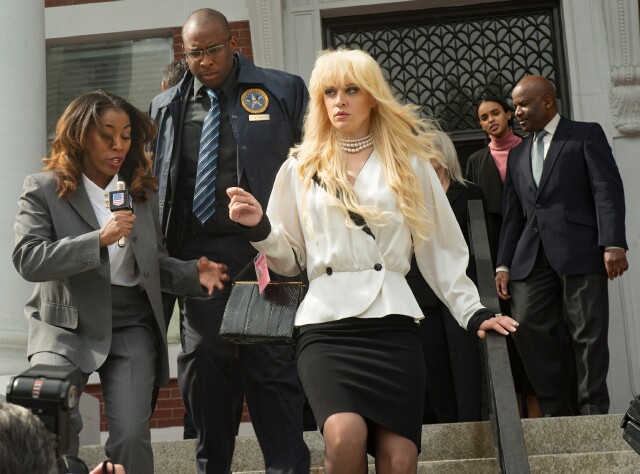 Whether you are familiar with her via her A&E reality series Growing Up Gotti, a stint on NBC’s Celebrity Apprentice, her writing, or simply by her last name, Victoria Gotti remains a polarizing figure.  Saturday night Victoria will tell another side to her personal story in Lifetime’s Victoria Gotti: My Father’s Daughter, a biopic that promises never-before-revealed stories about her life.  While she narrated (appearing on camera) and served as executive producer on the film, the portrayal of the formidable mob boss’ daughter was entrusted to actress Chelsea Frei, who leapt at the chance to portray the woman whose name alone is larger than life.

“I really wanted this role and was so excited when I got the call,” Frei shared during an exclusive MediaVillage interview.  “I loved the script, auditioned and had to pass myself off as Italian, which I don't necessarily come across as.  For the second audition I stained my hair very dark because I knew I was close [to landing the role], but the producers wanted to make sure I could pull it off.  I decided to just go for it, and it worked.  Then the nerves set in because I knew I would have to meet Victoria, who was very hands-on -- so no pressure.

“When I got to Vancouver, I immediately bleached my hair blonde,” she continued.  “We did a read through that Victoria was at and I was so intimidated and nervous.  But I have to say I can't think of a better learning experience as an actor than to have the character you are playing in the room with you and to realize what she had gone through.  That was the thing that really put everything into perspective for me.”

The film, based on Gotti’s book “This Family of Mine: What It Was Like Growing Up Gotti,” tells the story of a sensitive child growing up in an unconventional family.  Her beloved father John (played by General Hospital superstar Maurice Benard) was often M.I.A. due to his job -- and those long absences caused young Victoria to worry.  While no one seemed to speak of what his vocation entailed, the constant scrutiny John faced by officials could only mean there was a nefarious side to the man she adored.  John’s story has been recounted in numerous biopics and does factor in here; at this film's core is a tragic tale of love and loss.  From the death of her younger brother, to Victoria’s love story and marriage to Carmine Agnello, no stone is left unturned.

For Frei, no matter how much research she did, and despite the preconceived perception she had of Victoria, she ultimately reassessed everything she thought she knew.  “Meeting her really changed how I approached the character,” she revealed.  “It was no longer about all the research [I’d done]; it became much more about her.  This movie is [really] about a girl who has a crush on a boy her dad doesn't like.  [Preparing involved] stripping it down to the feelings she was having that were all so complex.”

Frei refers to her experience of doing the film as “amazing.”  But, there was one particular moment she shared with Victoria that really stood out.  “Opening her wedding dress together was incredible,” she recalled.  “She hadn’t seen it since she got married and the plan was for me to wear it in the movie, which I did.  We had a discussion about her wedding day and what she was feeling.  It was all so eye-opening; she discussed her marriage and it helped me a lot with the arc and trajectory of the character from that wedding day.

“I don't know if this is a misconception about Victoria, but I think you don't totally see her sweet side,” she added.  “The side that is all about family and unconditional love.  The first thing she wants to talk about is her grandson.  These are things that don't necessarily spring to mind when you think of her show or the name.  But that's Victoria.  Also, she's an incredibly accomplished writer and really is a jack-of-all-trades.  I think it's easy to lump her into the whole ‘Gotti mob thing,’ but she really carved her own path, which I think was very difficult for her to do.”

According to Frei, while Gotti was deeply involved in the production, her decision to not visit the set was appreciated.  “That was very helpful for me personally,” she said.  “She definitely had a lot of control, but she also gave us a lot of creative freedom.  I never felt restrained by the idea of what she had in mind for my character.  She really did let me take my creative authority and trusted me. She seemed very happy with the finished project, so I'm pleased about that. Surrounded by strong men, Victoria could have just fallen behind them.  But she forged her own path and at the end of the day, it's a story about that -- female empowerment!”

Victoria Gotti: My Father’s Daughterwill be telecast Saturday, February 9 at 8 p.m. on Lifetime.