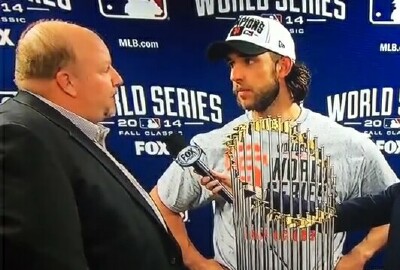 Chevrolet found viral gold with #Chevyguy and #technologyandstuff. Rikk Wilde, the Chevrolet dealers’ representative, got tongue tied giving the World Series MVP Award to the Giants pitcher Madison Bumgarner and fumbled his way through his discussion of the new Chevy Colorado. But instead of being a disaster, the Internet lit up and people embraced it for its authenticity. This led one business publication to declare that “The Auto Industry Has Mastered Viral Marketing.”

A viral win like this is certainly welcome news for Chevy. But it’s only one small bright light in what has otherwise been a deteriorating word of mouth (WOM) environment for Chevrolet and the rest of the domestic auto industry for the past few years running.

Sharp Declines in WOM for Ford, Chevy and Dodge 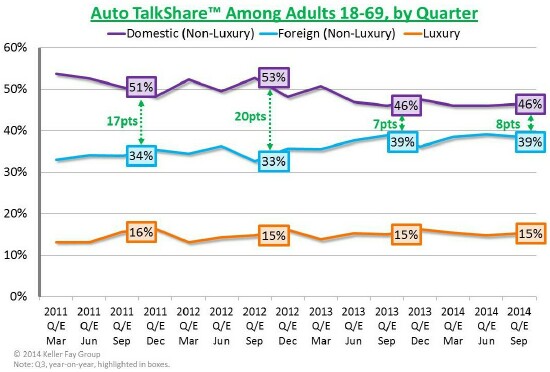 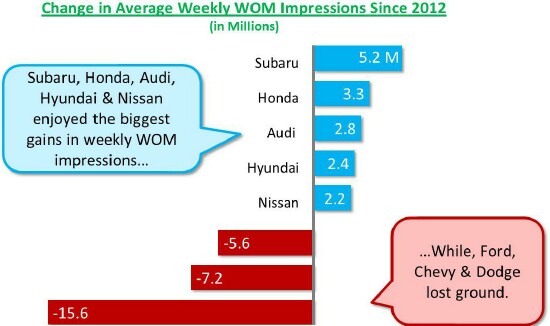 The silver lining for the domestic manufacturers is that collectively they still have the greatest volume of WOM. However, in 2011 and 2012 they held a 20 percentage point lead over the imports. Currently, their declining word of mouth means their lead over the foreign nameplates has shrunk to only 8 points.

The two groups with the strongest word of mouth for the domestic auto makers are the ones whose word of mouth has dropped the most. Blue collar workers and homemakers have registered declines of nearly 10% during the past two years in terms of conversations about domestic cars. In both cases, their conversations have shifted to foreign manufacturers.

Why does this matter? Because research shows that word of mouth is heavily tied to purchase intent, and particularly in high consideration categories we’ve seen that a substantial amount of sales can be attributed directly to word of mouth advocacy. An unscripted moment during the World Series can lead to a viral sensation as noted above. But the longer term and harder challenge for Chevy and the rest of the domestic auto industry is to get Americans talking again on a day-in and day-out basis, and the research shows that to turn that around they are likely to need a lot more than one moment of glory for the Chevy Guy touting “technology and stuff.”