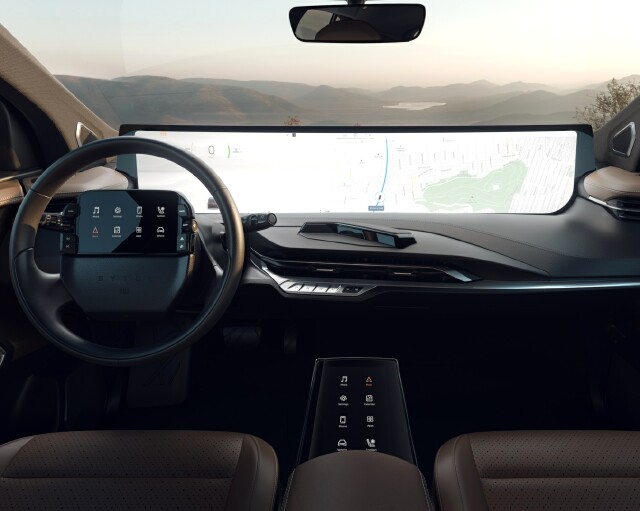 Toronto -- China’s big surge into the electric car market is “a bit of a bubble,” said Dr. Dan Kirchert, adding that there are upward of 200 players, many of them with ambitions to enter the lucrative U.S. market.  Kirchert should know: He is the co-founder and CEO of China-based (but global) electric vehicle startup Byton.  He was interviewed by MediaVillage last week at the 2019 Collision tech conference in Toronto.

Byton may, in fact, be the first Chinese automaker to enter the U.S. market in any numbers, and Kirchert says the cars (on sale in China later this year) can be expected here in 2020.  The company has bases in Santa Clara, California, as well as Nanjing, Munich and Hong Kong, a big contingent of experienced western engineers (BMW previously employed Kirchert and many other Byton-eers) and it’s stressing that its forthcoming MByte will be the best of all those worlds in design and build quality, and the world’s first Smart Intuitive Vehicle (call it a SIV).

China’s cars are a complete unknown on the U.S. market, and will have to be introduced to American consumers.  The argument could be made that the car will sell itself, since it’s a high-tech, luxury electric car with 72- and 95-kilowatt-hour battery packs for a cruising range of 250 to 325 miles (and a full-length 49-inch gesture-sensitive display) starting at $45,000.  That of course significantly undercuts the Tesla Model X, but (recent fires notwithstanding) buyers trust that Tesla can deliver the goods.

Byton (and Kirchert in our interview) stressed what it will be like to inhabit the car’s futuristic interior, which is geared to semi-autonomous and later fully autonomous driving (see photo at top).  In addition to that full-width screen, there’s an eight-inch tablet-like device in the steering wheel itself (it stays level as the wheel turns).  The idea is that the driver and passengers will have a lot of time to relax as the car drives itself.  “It will be a comfortable living space that, when it delivers Level 4 autonomy, will give you back time,” Kirchert said.

Byton will initially have a capacity of 150,000 cars annually at a brand-new factory in Nanjing.  Kirchert emphasized that its robots and painting equipment are state of the art globally, the same equipment used by BMW and other big world players.  After five years, Byton hopes to be building 300,000 cars annually.

So, how will Byton sell its cars?  “We will have a hybrid dealer model,” Kirchert said.  “The goal is to work with a major player to be our exclusive retail partner.”  This doesn’t mean a niche, say, in a Subaru dealership.  Instead, Byton is looking to work with a single experienced retail partner to market the cars.  Those discussions are ongoing, he said.

What about advertising?  “We will do targeted marketing, but not on a big scale,” Kirchert said.  “We will be at the next Los Angeles Auto Show [in November], and also at upscale venues such as Pebble Beach. We have taken 50,000 reservations globally.  Our approach is to encourage a core group of enthusiasts, and then grow it from there.”  Online will be important, Kirchert said, but of course all startups say that. Byton just opened an upscale “experience center,” Byton Place, in Shanghai, and will probably follow suit in other global capitals.

Tesla doesn’t advertise, but it gets a billion dollars worth of free publicity every time Elon Musk opens his mouth.  Upscale enthusiast brands such as Ferrari don’t advertise either, because they get wall-to-wall coverage in auto magazines.

Does Byton need to advertise?  I think it probably does.  Auto advertising is ubiquitous in China itself, where automakers have to work hard to stand out in a crowded field.  The aim, from the ads I’ve seen, is to associate the brand with upscale living, which probably wouldn’t be hard to do in Byton’s case.

The novelty of the first electric car from China will garner a lot of media time, but it won’t necessarily last all that long.  Advertising will be necessary to keep the car in the public eye, especially as the marketplace for crossovers is so crowded.

Kirchert predicts that half of the Mbyte’s market will be China, and the rest split between North America and Europe.  The car’s chassis was designed to support other iterations of the car, and both a seven-seat SUV and a sedan are coming.  All will be for sale in North America.