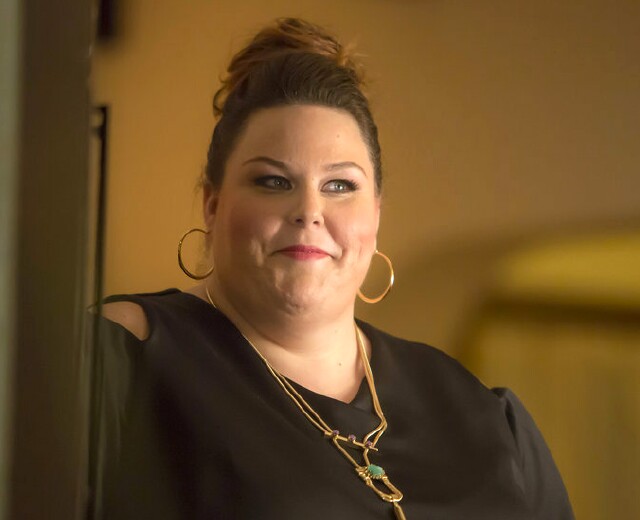 On the same day that its second episode made its debut, the critically acclaimed new modern family drama “This Is Us” received a sophomore season renewal from NBC. For many viewers the show’s instant appeal had much to do with the character of Kate, played by Chrissy Metz. Unhappy with her weight and desperate to do something about it, Kate attends diet meetings and leaves post-it notes in her fridge as reminders not to eat. Metz, who may be recognized from her stint as the Fat Lady (not our term) on FX’s "American Horror Story: Freak Show," couldn’t be happier about landing the role of a lifetime and is ready for any backlash that’s sure to accompany the show’s sensitive weight-loss storyline. Indeed, that’s a sensitivity that is very much in the national conversation this week after Hillary Clinton brought up Donald Trump’s unkind remarks about former Miss Universe Alicia Machado during the first presidential debate.

“[Acting] opportunities for plus-size women are very few and far between,” Metz (pictured at top and below with co-star Justin Hartley) recently told me. “Then, to have some substance and actually tell a story that other people can relate to … When I read the breakdown I thought ‘I have to have this job!’”

Despite being hidden under a prosthetic fat suit for AHS: Freak Show, an experience she describes as “incredible and amazing,” Metz is thrilled to have left behind that show’s repressive time period (1952) in favor of her current gig’s reflection of present-day realities. “This is so much more relatable,” she said. “It’s written so layered and beautifully that I feel like I won the lottery. It's incredible!” 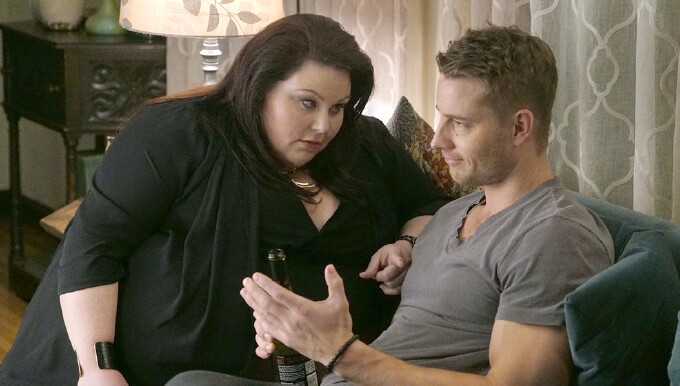 Metz also appreciates the double-edged story demand that accompanies her dream job; shedding some of the weight that landed her the part in the first place. “I teeter on this line because I want to change but I also really love myself,” she explained. “It's hard with this character because she doesn't really love herself yet. I look in the mirror and say, ‘I'm a plus-size girl, I got it going on and I'm cool. I'm good.’  I feel at this point -- and I do believe in destiny -- that things happen when they're supposed to happen. I feel like I'm ready to do that.  I just want to be 100% real and that's all I've always been.  So I'm happy to do it.”

For Metz the role of Kate has been a long time coming, and if the part results in her being labeled a “poster child” for real people on TV, she’s fine with it.  “I wanted to be a series lead on a television show as it's literally been on my bucket list,” she admitted.  “I'm ready! I've experienced life and so many of those things I've been unable to obtain for whatever reason. I feel like I'm grounded enough and I'm happy to be the poster child if you will. We aren't our bodies; it's what we have, and we want to make the best of it.

“I'm ready to encourage and support people on their journey because I've been supported and know the highs, lows and all the in-betweens,” she proudly continued. “I'm just so grateful to be the one to do it.”

The weight loss, she revealed, “is in the trajectory of the role, which is exciting because I have started that in my real life so it's happening exactly when it supposed to. If I’d lost weight I wouldn't have gotten this role. So it's like this was absolutely meant to happen and I get to do it while on the show and bring that into the performance. I'm really lucky girl.”

Metz doesn’t anticipate her weight loss journey to be easy, joking, “It'll be difficult when everyone's at craft services and I'm just having my egg whites.” Still, she’s happy to be doing it for her career and her health, and also, she says, because she doesn’t want to be labeled “a plus size actress forever.” She’s also prepared for the naysayers who will no doubt quickly label her a “sell-out.”

“People ask if I have to lose weight for the role and if I'm not body positive anymore?” she said. “No, everyone has different health issues and things that we don't necessarily know about. Like Melissa McCarthy, she looks incredible and I don't think she sold out. She's taking care of her body.  Everyone's perception is their reality. What people think has nothing to do with me. I have to do what I have to do for me and my health and the life that I want to lead.

“It doesn't mean that I don't find plus-sized women attractive,” she continued. “I love people, everyone is beautiful to me but I'm concerned people might say [I sold out].  I'll respond in a loving way they will hopefully understand.”

Metz thanks peers like Rebel Wilson, Gabourey Sidibe and Melissa McCarthy for opening doors to actors of all sizes, describing all of them as, “beautiful, talented women” placing the emphasis on talented. “I absolutely look up to Melissa McCarthy,” she admitted. “She's brilliant, gorgeous and hilarious. I’ve actually been mistaken for Melissa and I’m like, ‘I wish!’  I’ve never signed an autograph as her,” she added laughing. “I couldn't live a lie and couldn't do that.”

This Is Us is telecast Tuesdays at 10 p.m. on NBC.