Christa B. Allen On Her Lifetime Movie About Racial Injustice, "The Fight That Never Ends" 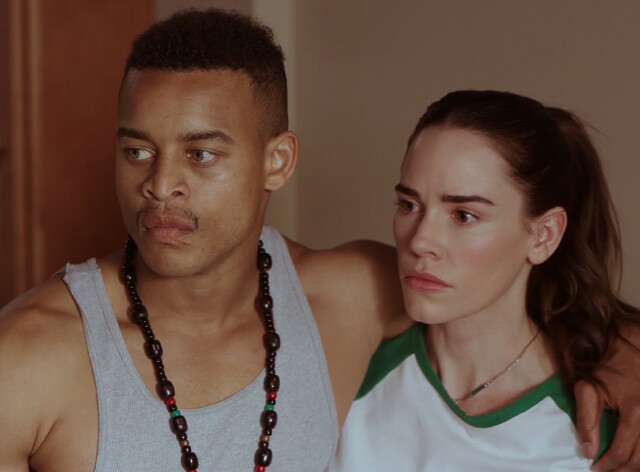 Christa B. Allen, a familiar face to Lifetime viewers, returns to the network this weekend in the premiere of The Fight That Never Ends. Based on the true-life story of Joanne Beck, the film depicts Beck's fight against racial injustices after volunteering at a community helpline in L.A.'s South Central. There she meets John (Jay) Wesley Hunter (Robert Ri'chard, pictured at top with Allen), a.k.a "Joker," the leader of a local gang who is in need of help. Despite pleas from her boss Leon Watkins (Allen Payne) to not get involved, Beck can't help but do otherwise. Little does she know how this act of kindness will forever change the course of her life.

Allen (pictured at top) instantly fell in love with the script – but landing the role of a lifetime wasn't a sure thing. "I immediately loved the story and the character of Joanne so much, I would have done anything to play this role," she explained in an exclusive MediaVillage interview. "I auditioned and felt it went pretty well. But Joanne is a swimmer, and they wanted the actor playing her to really swim in some scenes.

"The director, Preston (A. Whitmore ll), asked how strong a swimmer I was," she continued. "Being one of those actors that won't lie for a role, I replied, 'Average, I mean I'm not going to drown.' His face dropped in disappointment. After that, I immediately called a professional swimmer/coach friend and hired her to teach me. We filmed me swimming and I sent the footage to Preston, and Joanne who is an executive producer on the film, with a note saying, 'Just so you know, this is what I look like in the water.' I think that's what sealed the deal. Joanne felt I was fighting for the role in the same way that she fought for justice in her life, and in her life story."

While Allen wasn't familiar with Beck's story, the film's backdrop was something she was versed in. "I was very familiar with the race riots that occurred in Los Angeles in the early 90s, and what happened with Rodney King," she explained. "That all happened during the same period the film takes place, and we show an intimate snapshot of what was happening [around] that time.

"But playing a real person was terrifying," she added. "All I cared about was doing right by Joanne. I felt an incredible responsibility to tell her story in the way that she wanted it told. Joanne was so incredible to work with, so kind, thoughtful and empathic, I really felt like she was there any time I had a question. It was really nice to have her on set to consult."

To Allen, the power of the film's storytelling is its take on unity, and how two unlikely forces can affect real change. "I loved that message," she shared. "Them coming together really made them both more effective. The way I understand it, 'Jay' wasn't so involved in his community before Joanne came along. But as a duo, the power of their love and working together really impacted the community. That's a great lesson, and also just the power of great leadership. They both were under the care and direction of Leon, who cared so much for his community. There's a need for good leadership in the world today, and I hope that people are inspired by that aspect of the story. We're more powerful together! If you want to go fast go alone; if you want to go far, go together!"

One thing the film confronts head-on is racism. Beck faces it head-on, not only in the community she wants to help but also from a family who doesn't understand what she's trying to do. "The challenges Joanne faced within her own family and the racism she confronted, is the most important part of the story," explained Allen. "I'm no scholar on this by any means, but from what I've read, and the experts I've heard, the most important part is for white people to be having those hard conversations in intimate communities, and within their families. When friends say something inappropriate, stop and have those hard conversations. Confront it in the moment; that is the work. Her family created distance because they didn't accept her new life or her partner. It's only by creating change and confronting that behavior that we're going to change anything.

"From my personal experience, one of the most powerful things we can do to be more understanding and create a more equitable society is to be integrated in a real way," she added. "I often face criticism from people who don't understand my friendships. Like the one acceptable friend for me to have, is someone of my same age, same race, maybe in the same industry? The second you start having friends who aren't, people are like, 'Why are you friends?' It's so weird. I won't live my life by society's expectations of who I [should] interact with. We made this movie in April of 2019 and the Black Lives Matter movement started about a year later. It felt so timely as these are conversations that we need to be having.

"There's still a lot of work to be done and anytime you dive into conversations of unification you're going to get it wrong sometimes," she added in closing. "And there are things that could be improved. I anticipate there will be varied perspectives on this film; that it's not helpful, or there's white saviorism, and I'm open to those. As creators, artists, and as people, we need to be open to the idea that we're not having these conversations perfectly. We're going to stumble, and we're open to doing better next time. I'm very invested in doing the work."

The Fight That Never Ends will be telecast Sunday, October 17 at 8 p.m. on Lifetime.