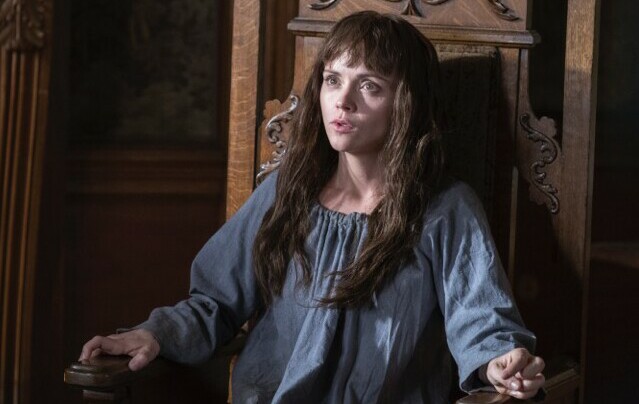 Christina Ricci returns to Lifetime this weekend in the premiere of the original movie Escaping the Madhouse: The Nellie Bly Story.  Set in early 19th century New York, the movie tells a fictionalized version of the true tale of pioneering investigative journalist Elizabeth Cochran Seaman, who under the name of Nellie Bly feigned mental illness to gain entry to the infamous Women’s Lunatic Asylum on New York's Blackwell's Island. Her report would later shine a light on the despicable treatment of its patients and eventually lead to such institutions having their doors closed forever.

Seaman’s journey from journalist to patient and back, allowing her to expose the institution's barbaric practices, was a harrowing one.  “I wasn't really familiar [with Nellie] at all and hadn't really heard of her,” Ricci admitted when MediaVillage spoke with her exclusively about the project.  “The research I did included reading what she wrote along with reading as much as I could about [Seaman herself].  I thought it was really important for this performance to really understand the society she came from because clearly, the way she behaved and conducted herself made her a target at the asylum.

“Initially I thought this is a person who was raised in comfort and privilege,” she continued.  “For it to be inconceivable to a person that a place could be this terrible means they were never really exposed to anything that bad in their life. For any person [to willingly] put herself in this situation means she had no concept of what true danger is.  I really thought that was informative.  The fact there was no real plan to get her out speaks to the fact that there was a real disconnect between what was going on in the upper class versus the lower class. Not having an exit strategy really goes to show you the world she came from.”

As Bly, Ricci endures some harrowing experiences while institutionalized, but thanks to her years in front of the camera she never let them get to her.  “I learned a long time ago by virtue of some of the mistakes I made not to immerse myself in a character to an extent that is harmful,” she revealed.  “I've trained my mind so I don't do it as consciously as you might think.  It also comes from being a child actor, and what my brain has to do in order to protect me.  I literally take off the wardrobe and when they call ‘cut’ I'm a different person.  I don't really maintain any of that stuff.  It's impressive that people can immerse themselves in a character, but my brain just won't let me do it.  I have a brain that fights for mental health.” 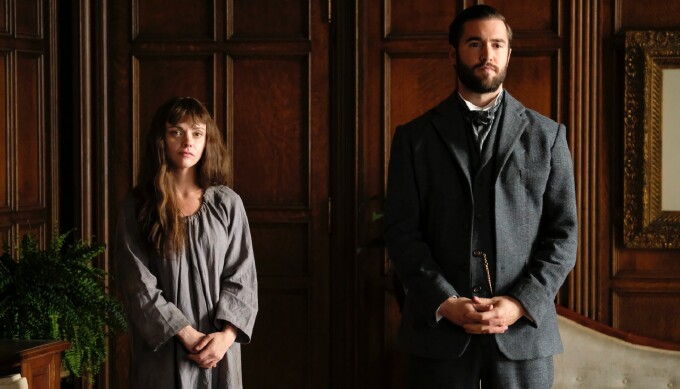 Seaman/Bly marks the third historical character the actress has portrayed; one being legendary murderess Lizzie Borden (first in the 2014 Lifetime movie Lizzie Borden Took an Ax, then in the network's limited series follow-up, The Lizzie Borden Chronicles), the other Zelda Fitzgerald (Z: The Beginning of Everythingfor Amazon).  Despite each character having very different tales, there was a common denominator the actress found appealing about all three.  “The only similarities between Lizzie, Zelda and Nellie is that there is no actual footage of them,” she shared.  “I prefer playing people [who cannot be seen in] actual footage as it makes the process a little more free.”

Starring opposite Ricci is Josh Bowman (Revenge, Time After Time) as Nellie’s psychiatrist Dr. Josiah and Judith Light, who is stellar in the role of Matron Grady, the sinister head nurse who tortured her patients into submission.  While on the surface Dr. Josiah could be construed as a nice guy, it’s his selfishness and professional incongruity that keeps Nellie locked up.  “I defined parallels with this story and the world today,” Bowman (pictured above with Ricci) explained.  “He was in a position of power and he abused it.  I really enjoyed [playing] the duality of this character because you believe he's a nice guy when in fact he turns out to be a dirt-bag.

“He was enamored by Nellie and deep down believed she was really okay,” he added.  “That's what probably makes the whole thing a little scarier; he's [taken with] this articulate, beautiful woman with a strong will.  She’s someone he wouldn’t usually be spending time with [in the asylum].  I believe my character was fictionalized and I'm not sure if [Nellie] actually had a psychotherapist although I'm sure she probably did, and he probably was male at that time.”

Despite only having five days to prepare for the role, Bowman relished the chance to work alongside both Ricci and Judith Light.  “Christina is a fantastic scene partner, along with Judith who was unbelievable,” he enthused.  “As the antagonist in the story Judith played it so simply, but I was mesmerized by her. As an actor, to watch her be that magnificent, along with Christina ... any time you can work opposite award-winning actors you are very lucky.”

Thanks to Lifetime’s mini-series The Lizzie Borden Chronicles, Ricci was nominated for a 2016 SAG Award (Outstanding Performance by a Female Actor in a Miniseries or Television Movie).  Needless to say she is happy to be back. “I've had a very nice long relationship with Lifetime so I'm happy to work with them again,” she said.  “[Lifetime] does these very big, dramatic moments in people's lives with the highest drama.  You go through these harrowing two hours; it's kind of like an entertaining exorcism.  I think that's one of the reasons we like things that provoke such emotions -- we get to go through these journeys and come out a little changed.”

Escaping the Madhouse: The Nellie Bly Storywill be telecast Saturday, January 19 at 8 p.m. on Lifetime.