By Steve Gidlow March 19, 2021 Behind the Scenes in Hollywood Archives 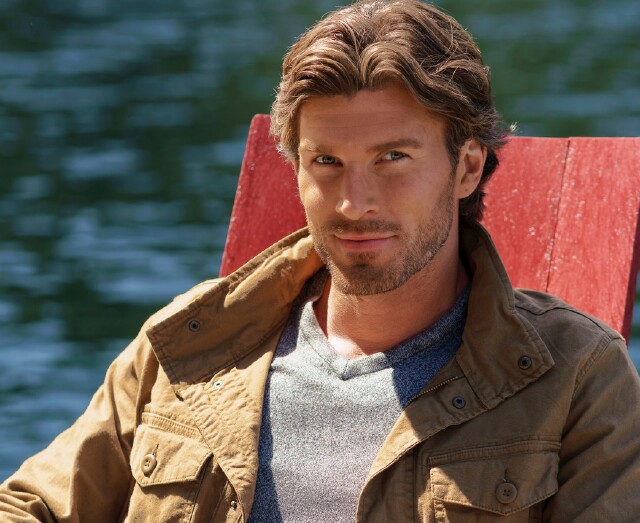 This weekend Christopher Russell (pictured above) finds himself in very familiar territory with the premiere of his latest Hallmark Channel movie Chasing Waterfalls. He's back in the outdoors, and for the third time, he's starring opposite Hallmark regular Cindy Busby. "Yeah, the first time [working together] was in 2017 on A Puppy for Christmas," he chuckled of their reuniting again during an exclusive interview with MediaVillage. "I played the kind of nasty boyfriend that she leaves for the more down-to-earth rugged guy, so it's funny that since then I've sort of switched to the other side of things.

"I do 100% love working with Cindy, as some people you just click with right away," he continued. "People mention the word chemistry, and that could be [either] male or female. It doesn't matter. It's about clicking -- knowing the rhythm of the script, or the pace, and not even needing to talk about it. There's a very good camaraderie between the two of us and we're very supportive of each other. With these movies especially, it's just the two of you for most of it and if you're not getting along, or have other ideas about what should be happening, then it's going to be a few very bad weeks." 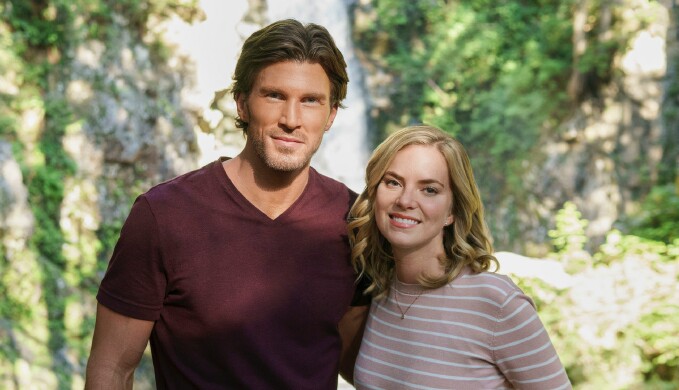 Having Busby (above right) at his side once again ensured that wasn't the case. Coupled with the fact he was outdoors and working again after lock-down made him a happy camper. "Oh, I'm okay with that!" he said of being on location. "What's great about this [movie] is I'm outside, but my character's outdoorsy-ness differs from film to film. In Nature of Love, I was a guide, but I also studied at university for all sorts of environmental endeavors and it was my passion to take [that] to greater lengths and to see more of the world.

"For Love in the Forecast (also with Busby), I was a farm boy checking out the city for a bit," he added. "But at the end of the day, he was just a true farm boy. In Chasing Waterfalls my character had a nine-to-five type job in the city but felt he was missing something in his life. After a little soul searching in nature, he realizes that's where he could be most beneficial to others and stayed. So yeah, they all had different avenues to get to these [outdoor] places."

Chasing Waterfalls follows the story of Amy Atwater (Busby) an aspiring photographer, given a huge career break; an assignment to shoot the Angel Tree, one of North America's most fabled waterfalls, to prove it exists. After she wins the trust of tour guide Mark (Russell) and his daughter Kyra (Cassidy Nugent, pictured at bottom, center), Mark agrees to help her, with the proviso she never reveals the waterfall's actual location. However, when Amy's work threatens to reveal Mark's treasured secret, all trust could be lost. 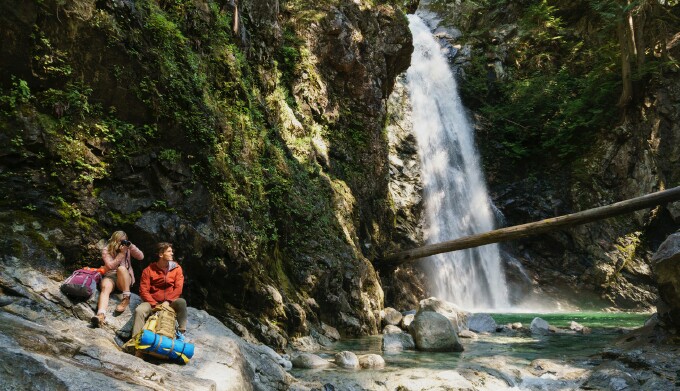 For Russell, having a script that cleverly interwove a multitude of metaphors, making them applicable to the characters' life journeys, was appealing. "Even the title, the ‘chasing waterfalls' metaphor, you're never gonna catch [one] because it just keeps moving," he explained. "The dream of doing more with your career, and it just seems out of reach like with Cindy's character, who feels she's been chasing waterfalls her whole life. She wants to do more but it seems to lead to the end of the waterfall and drops off. Reading it, all of that resonated. Then with Mark, he was chasing waterfalls, metaphorically speaking, with his desk job and being in a relationship that shouldn't have been and trying that make work. Then finding solace in being out in nature. It all kind of ties in.

"I also loved that Mark has a daughter in this film," he added. "I have a daughter in real life. To be able to play a father at my age, the scripts are few and far between. It was nice to see someone who'd already gone through that part of their life yet was starting anew at the same time. The dynamic between finding love again and having to take into consideration the importance of having a daughter and how she will feel about moving forward with life if someone else were to come into the mix -- it all made for an interesting experience." 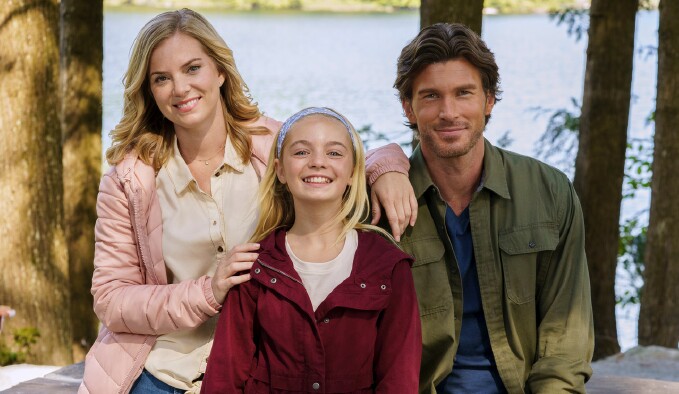 One thing Russell didn't expect when signing onto the film was the intense workouts he and his co-stars would endure. "There is a lot of hiking in this one," he laughed. "There were more challenges for the crew with their equipment, if I'm being completely honest. We were very well taken care of and everything was very safe, but all the hiking and everything is real, no faking. We wore backpacks and hiked for up to 40 minutes to get to [some] locations. No movie magic there, it was straight up happening for real."

Russell is delighted that at a time when we all need it, he can help remind viewers of the wonders of nature via the film. He's wrapped two more movies since completing Chasing Waterfalls last August -- Love Is Trending opposite Jen Lilley and High Flying Romance with Jessica Lowndes.

"Working on a Hallmark movie is always lots of fun," he concluded. "It's like a family from the get-go, right to the end. It's not like [some] of those bigger shows with chaos happening around you and everyone's stressed. On a Hallmark movie, it's relaxed and while everyone's hard-working we all support each other, so it's always good."

Chasing Waterfalls will premiere Saturday, March 20 at 9 p.m. on Hallmark Channel as a part of its annual Spring Fling programming event.