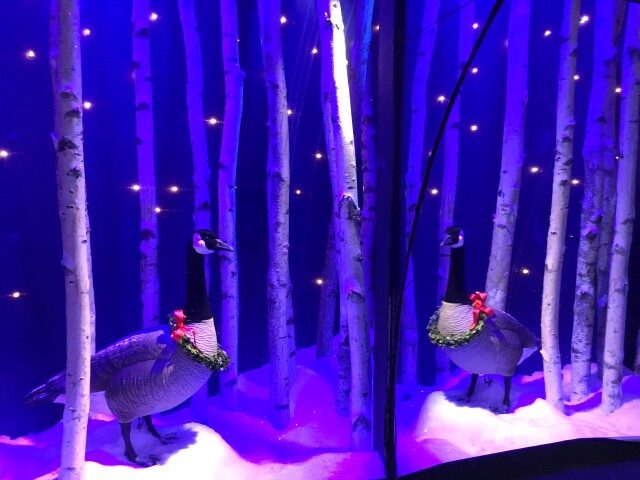 If you’re looking to be hit by the Christmas blues, I recommend you make the walk over to Fifth Avenue and 38th street.  Any other year you would have run into long lines of tourists aiming to get a peek at the beloved, world-famous and historic Lord & Taylor holiday window display; but in 2018 all you will find is a sidewalk unobstructed by crowds, two lonely geese perched in a window and people wearing sandwich boards with wording that confirms the store’s imminent end: “Everything Must Go.”

Before I bemoan the state of the department store, know that I’m biased; my mother worked for years as a buyer at Lord & Taylor, then Bergdorf’s.  I grew up hearing about the glory days of shopping long before Mrs. Maisel madethe makeup counter at B. Altman look to be an enviable office space.  I’ve kept things stored in a hatbox from Bonwit Teller, a relic of a pre-Trump age during which hats were more widely worn.  For me, Scatter my Ashes at Bergdorf Goodman is not just the title of a very good documentary but a serious consideration.

Henri Bendel, another centenarian store, will also make this season its last.  This one hurts me a lot.  I’ve always had an affinity for the brown and white stripes that adorn a Bendel’s shopping bag even if the merchandise that goes in that bag was largely overpriced and underwhelming.

Two years ago, a disgruntled shareholder of Hudson’s Bay Company made headlines for issuing a pointed letter to HBC’s Board of Directors.  “Hudson’s Bay is a real estate company, full stop,” he wrote, and argued for it to be run that way.  Hudson’s Bay will net about $850 million from the sale of the Lord & Taylor building to WeWork but its crown jewel is the Saks Fifth Avenue flagship uptown, which is valued at $3.7 billion.  I can’t even find the words to ask if that landmark store is in jeopardy, too.  Saks without Fifth Avenue is just as bad as Fifth Avenue without Saks.  If Saks goes, so do I.

Since the announcements that Lord & Taylor and Bendel’s would leave Fifth Avenue, two thought pieces have published in The New York Times that mourn not the familiar facades of these historic establishments but, perhaps more alarmingly, leisure and luxury.  Each is well worth a read and makes the case that stores like Lord & Taylor and Bendel’s are anachronisms, their fate sealed by a market that favors speed and value.

It’s easy to place blame on online shopping, the easy-button approach to making purchases, and yet in Q3 of this year, e-commerce accounted for only 9.8% of total retail sales.  Indeed, according to a 2017 study from the National Retail Federation, the majority of Millennials and Gen Z’ers make their purchases in stores, and just a little over a third are primarily online shoppers.  And if leisure and luxury really are dead, someone might want to inform RH (formerly Restoration Hardware) – the high-end homeware retailer just opened its 90,000-square-foot flagship in Manhattan’s Meatpacking District.  At a time when retailers are abandoning shop, RH poured $50 million into its New York “Gallery.”  I visited the store recently but only to make myself comfy in one of the ground floor showrooms while I awaited a table at a nearby restaurant.

Then there’s Amazon, which has been blamed for the demise of brick and mortar while investing heavily in it.  According to GeekWire, Amazon has nearly 600 physical store locations with Whole Foods making up the majority.  One of its two New York-based bookstores occupies the space once held, years ago, by the now-defunct Borders Books in Columbus Circle.

This holiday season, Amazon went super old school by releasing a toy catalog in the spirit of the now-defunct Toys "R" Us.  It is a rather unsettling trend for retailers; Amazon eats you for lunch and then invites you for dinner.  In this 2017 piece in The Atlantic, writer Derek Thompson argues that Amazon is operating according to the Sears playbook.  It’s worth a read, especially now that Sears, possibly America’s most famous retailer, has filed for Chapter 11.

Just last month, Amazon CEO Jeff Bezos told employees, “Amazon is not too big to fail.  In fact, I predict one day Amazon will fail.  Amazon will go bankrupt.”  This is an ominous forecast that validates the Sears thesis.

And so, during the season for reflection (the song might as well be “It’s the Most Nostalgic Time of the Year”), I’m left with one lingering question on the state of shopping:  Must everythinggo?