What We Learned at the 1stFive Intern Reception 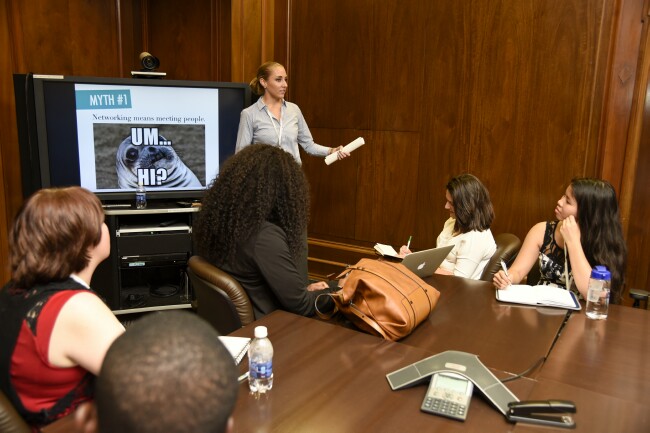 On July 23 more than 300 members of the 1stFive community filled the offices of OMD North America headquarters for the organization's second annual summer intern reception, hosted by OMD CEO U.S.A. Monica Karo. The event kicked off with a keynote from Kay Koplovitz, Founder of USA Network and Chairman of Springboard Enterprises, followed by breakout sessions led by David Moore, Chairman of Xaxis and President of WPP Digital; Anne Hubert, Senior Vice President of Scratch at Viacom; Katherine Shappley, Head of U.S. Agency at Facebook, and 1stFive contributor Sydney Fulkerson, Marketing Manager at IMC and author of "The Coffee Run."

In the final entry of this five-part series, MyersBizNet's Leanna Garfield reflects on what she learned from Sydney Fulkerson (pictured at top). Be sure to read our reports by other summer interns about their meetings with media industry leaders, plus columns about the event by MediaVillage correspondents Simon Applebaum and Charlene Weisler.

I had the pleasure of hearing a fellow 1stFive member and contributor, Sydney Fulkerson, discuss networking. She spoke about several misconceptions of networking and how we can all make better connections, from our first internship to our dream job. Fulkerson boasts a seasoned history, interning in both marketing and fashion, so much so that she wrote an entire book about her experiences: "The Coffee Run: And Other Internship Need-to-Knows." She recently reached her crowdfunding goal to put the book on shelves next month.

At OMD, she let us know why our networking efforts might not be working. The first myth she shared: Networking means meeting people. Sure, that's how "networking" may be defined in the dictionary, but it's more than just a quick exchange. Networking means connecting with people, Fulkerson said, and that requires some preparation before you even say "hello." Do your research. Figure out where people work and what they've done at their company. Think about why you actually want to connect with them.

Fulkerson's next myth: Networking is about making yourself look good. In reality, it's the opposite. You want to build others up and let others know you admire them. Ask them questions about their current projects and what they read to stay informed and creative. Fulkerson said that networking means you listen more than you talk.

Although this may seem counterintuitive, the goal of networking is actually not to land a job or internship, Fulkerson explained. It's more about building sincere connections with people who inspire you. This will help guide you to your dream role down the road, even if you don't realize it now.

That brings me to Fulkerson's last tip: Don't solely network when you need something or when you think you need to (like the last month of college). Build meaningful relationships every day.

Leanna Garfield is a recent magazine journalism graduate of Syracuse University and a chronic wanderlust. This summer, she is an IRTS fellow, an intern for MyersBizNet, and an editor for 1stFive. Say hello at leannagarfield@gmail.com or tweet her @leannagarf…