Competition Is Heating Up in the Streamed Audio Space 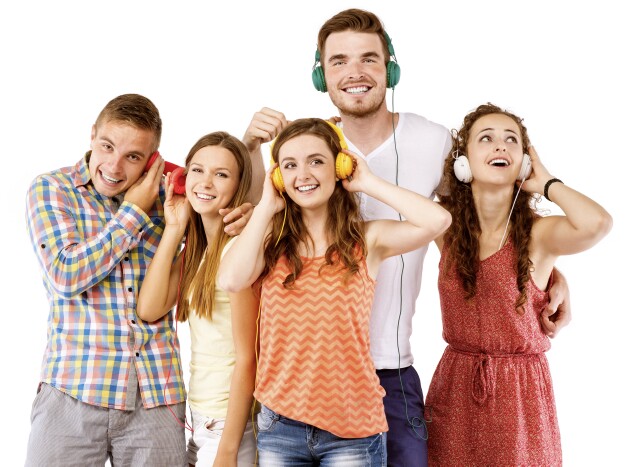 As I explored in the first part of this series, we're in the midst of a revolution in how we listen to audio. Thanks to the ubiquity of smartphones and digital streaming apps, music and audio are becoming something we access, rather than something we own. This transformation is especially apparent among Americans under the age of 50. In this column, we'll explore the competitive landscape of music streaming platforms. While there is no shortage of players in the space (YouGov currently tracks 28 audio streaming apps), there are a few clear leaders who are waging a fierce battle for listeners.

The audio streaming competitive landscape has seen a lot of players try to enter the space, but so far only a few have established scale.

The media landscape is a lot blurrier than we often like to think of it, and not always easily contained in rigid categories. For example, YouTube is predominately known as a video streaming platform but YouGov data shows it is also the most widely used music streaming platform in the US. Top audio streaming platforms Spotify and Pandora find themselves in a tight three-way race with Amazon Music – both for users in general and as the platform they turn to most often. Apple Music and iHeartRadio, on the other hand, are tertiary players with niche audiences. 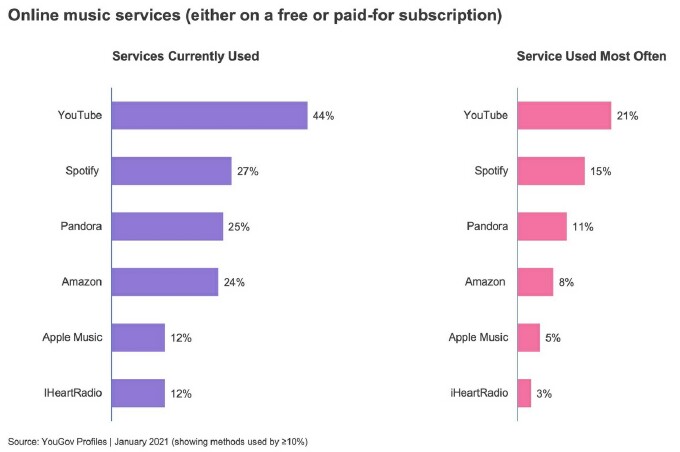 YouTube is the top music streaming service used among all age groups, especially among adults under 50. From here, we see notable differences by age. Spotify is just eight points behind YouTube among adults aged 18-34 but trails significantly in other age categories. Among adults 35-49, the race for users is tight between Amazon, Pandora and Spotify. Adults aged 50 and over tend to favor Pandora and Amazon over Spotify and the latter's usage drops dramatically among older adults. 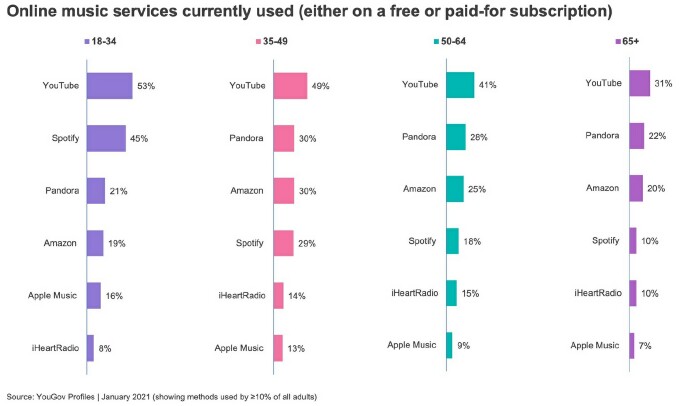 The differences in platform usage by age are tied to the overall differences is music listening we uncovered in our last article. Adults 18-34 prefer music streaming over CDs and downloaded music, making platforms like YouTube and Spotify a natural fit because they allow users to search for the specific song or album they want to listen to (a feature Pandora now offers, albeit later than its competitors). Adults aged 50 and over, on the other hand, largely listen to radio in the car and their CD collection, making Pandora's radio-based format a natural extension of their linear radio listening on their smart TV or smartphone and Amazon Music on their Alexa devices.

Among people who stream audio on Amazon and Apple, roughly two-thirds are paid subscribers while Spotify's listener base is nearly evenly split between paid and free subscribers. The other leading platforms are predominantly used for their free, ad-supported services. This leads marketers to very different ways of engaging with users on these platforms. Predominantly ad-supported platforms like YouTube and Pandora (if your audience is 35 and over) make valuable additions to a reach/frequency media buy, while the reach opportunity on Spotify and Amazon is more limited. Ad-free listeners still comprise a significant portion of the audio streaming audience and brands can still engage with them if there's a value-add to the listening experience. 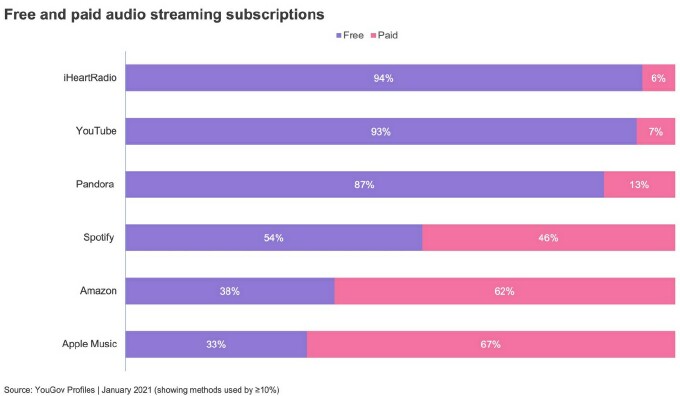 When it comes to omni-channel listening, people tend to use more than one platform, in large part because more than half of dedicated audio streaming services also use YouTube to stream music. Roughly a third of audio listeners use a mix of Spotify, Pandora and Amazon Music.

Adults aged 18-34 are more likely to pay for an audio streaming platform, which makes sense because audio streaming has replaced the traditional ad-free experience of owned music (CDs or downloaded music). If their behavior is a predictor of what's to come, we may see more paid subscriptions and consolidation into fewer platforms. And as the data suggests above, Spotify has won over a significant portion of young adults, and time will tell whether Amazon, Pandora or Spotify will breakaway with a clear lead in other age groups.

Audio streaming is at a critical junction. Users increasingly expect an audio streaming platform to replace not only radio but also their personal music collection. Amazon has emerged as a tangible threat to established leaders among adults over 35 and the next couple of years may be make or break for brands.

For marketers, the takeaway I want to leave you with is that we need to consider the role of audio streaming in our media plans. The unique combination of where an audience spends its time and a brand's advertising goals (reach vs. engagement) means certain audio streaming partners will be a better fit than others.

The speed of change continues to accelerate, and the past year has thrown us some real curveballs! The right data can empower marketers more confidently navigate today and plan for tomorrow. I love to strategize and help -- contact me to see this data, and more, broken out for your target audience.