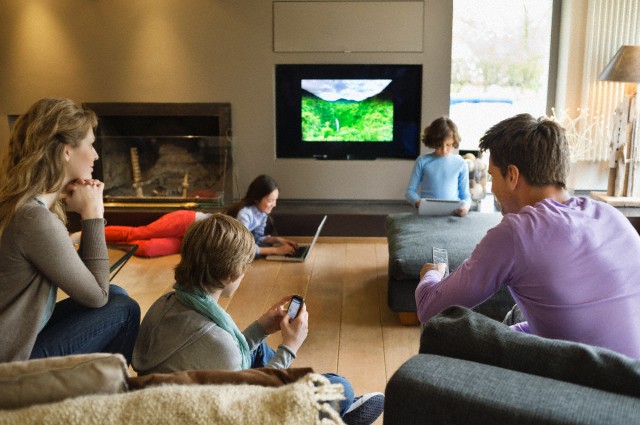 An article from all the way back in 2009, delivered by none other than leading comedy-property The Onion, actually managed to predict the future. It stated, we are “spending 90 percent of our waking hours staring at glowing rectangles.” It’s even funnier today, because it’s basically true. The proliferation of connected video delivery devices (TVs, connected TVs, desktops, laptops, smartphones, tablets, phablets, car navigation screens, etc.), or “glowing rectangles” if you prefer, along with the explosion of broadband connectivity (nearly 80% of homes today,according to Leichtman Research Group), have had a profound effect on how nearly all industries do business. This is especially true in the television business and offers us both new challenges and opportunities.

Some say that the rise of the web is signaling the demise of TV. What we see in reality though is that the consumption and popularity of television content is growing, not declining. People are watching more television content than ever before and, judging by the growth in social TV interactions on Twitter and Facebook, viewers are just as passionate as ever about television if not more so. It’s just a matter of the size and location of the screen on which they are watching.

As an industry, we are now focused on capitalizing on the key trends of universal broadband connectivity and device proliferation in building viable new business models that support and expand on our existing ecosystem. In order to do so successfully, we look at myriad developments as both challenges and opportunities as we cultivate the best strategies to buttress our healthy, existing TV business and meet the needs of growing audiences across new and emerging platforms.

In Part One of this two-part series, we’ll delve into the opportunities and challenges of Video Everywhere, or the ability to distribute and consume video programming across devices. Stay tuned for Part Two, which will delve into time-shifting and video on-demand as well as the cord-never and cord-cutter audience.

The challenge we’re facing is that this consumption is spread across multiple platforms and devices. Today’s consumers are digital omnivores -- they want to watch content on the best screen available, and they expect to be able to do so whenever and wherever they want. Just look at Nielsen’s breakdown of device penetration by household from the same report noted above: 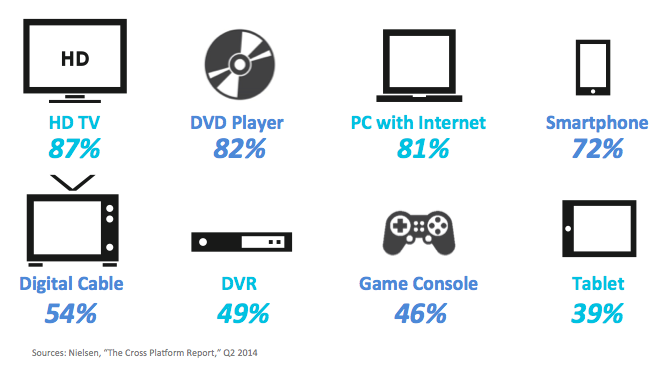 There is a tremendous amount and mix of devices -- with many set to reach scale in the next few years -- each with their own unique parameters to account for as a content distributor: Video format, delivery mechanisms and measurement are just a few of the major ones. The great news is that as we continually solve how to supply more content to more of these devices, we’re seeing overall consumption grow. Case in point, CBS has more viewers today when looking across all platforms than it did 11 seasons ago in ’03-’04.

At CBS Interactive, we’ve managed the diversity of distribution opportunities by being focused on keeping the CBS brand front and center across all devices and meaningful delivery platforms. For example, CBS.com and our CBS app have always been and will always be our central hub for the Network’s content in the digital world. We feel strongly that the CBS brand means something to consumers and that strategy has paid off. CBS has led the other networks’ multiplatform web properties consistently in terms of viewers (comScore Video Metrix & Media Metrix MulitPlatform) over the past five years. We may have been later than other networks on certain devices, but we made strategic decisions to wait for these platforms to have true scale and the ability to measure audience and deliver advertising in a way that was supportive of our existing business.

With the recent launches of our first direct-to-consumer, subscription live-TV and video on-demand service, CBS All Access, and our 24/7 digital news channel, CBSN, we’re building on this strategy. We’re delivering our users access to more content on more platforms in ways that are still driven by the core CBS brands. With this strategy, we’re also reaching new and younger audiences and offering more opportunities for advertisers, too. In fact, on our flagship CBS.com alone, the average age is around 40, meaningfully younger than the average age of broadcast TV viewers, according to Nielsen.

What’s also exciting for us is that the growth in digital video consumption isn’t limited to smaller screens, but it’s also bringing TV content back to the TV via the Internet. According to The Diffusion Group, 60 percent of homes now have a device that can connect the Internet to their television and, according to Parks Associates, 71 percent of those connected TV homes are using those devices to watch TV online.

With this in mind, we launched CBSN across numerous platforms, including Amazon Fire TV, Apple TV and Roku, where it quickly became the No. 1 news channel in terms of hours streamed (Roku Data, November 2014-June 2015). In fact, 88 percent of our connected TV users now watch CBSN multiple times per week. We’re now preparing our other services, including CBS All Access, to reach the growing connected TV audience and recently launched CBS All Access on Roku players and via Chromecast with more connected device platforms coming soon.

What we’re seeing is that while consumers want to have the freedom to watch on the device of their choosing, they’re going to choose the best screen available. We believe the future of television will be delivering incredible, premium video in different formats according to individual consumers’ preferences on device, platform and time of viewership.

Marc DeBevoise is the Executive Vice President and General Manager of CBS Digital Media - the organization responsible for the digital media businesses of the CBS Television Network.  In this role, he oversees CBS Interactive…