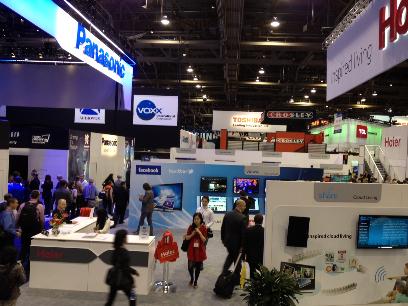 Gone are the days of CES being all about Microsoft (this was the company's last major participation at the conference). This year's conference wasn't focused on one or two leading firms. Instead, the convergence of media platforms, the explosion of tablet devices, and the move to the cloud has meant that CES is broader in scope than ever.

Last week's Consumer Electronics Show may have disappointed many because there really weren't any huge, splashy announcements (though some firms certainly tried). Instead, the conference provided a window into major trends influencing the entire media food chain. As Group M chairman Irwin Gotlieb pointed out to me, "This year, the major advances and announcements at CES were evolutionary, not revolutionary." This reflects an important shift in media industry investment away from new technology development to the application and implementation of existing technologies. This shift is one of the reasons more than 5,000 marketer and agency executives attended this year's CES, a trend that's been accelerated by a formal relationship between the Consumer Electronics Association and Medialink, which hosts a well-attended opening night party and CMO dinner at CES. For the first time, the CES Digital Media Community and I hosted a party sponsored by Grab Media, Simulmedia, Martini Media, Videology and Digital First.

It isn't by chance that the lead-up to the annual Consumer Electronics Show (CES) in Las Vegas is crammed into the excitement of the holiday season. CES offers consumers, technologists, media professionals and investors a birds-eye view of the highest impact drivers of media consumption and distribution awaiting the industry later this year and beyond. The biggest event of its kind, this year's CES was also the largest in history: more than 3,100 exhibitors across 1.8 million square feet of exhibition drew more than 150,000 attendees. Massive advertisers like Unilever (they sent over 30 employees to figure it out) and P&G (which brought in worldwide global managers) proved they are serious about leveraging content and messaging in this new world of smart TV. All the major media agencies and agency holding companies were well-represented by senior executive teams.

Capitalizing on users watching more video content, the media industry is still full-throttling its efforts to expand 3D. Whether it's in theaters, gaming consoles or in sports television (like ESPN's live demo of a 3D boxing match presented from a full-size rink at the center of the ESPN booth), lifelike video is growing. The 3D @ Home Consortium announced at the show that for January 2011 through October 2011, 9% of all television purchases were 3D-enabled. Further, the organization expects 3D mobile devices will surpass 148 million units in 2015.

LGs 55-inch OLED 3D TV showcased mind-blowing technology that wowed a cynical CES audience, and Toshiba's glasses-free 3D-TV, while less impressive, still demonstrated advances that will ultimately lead to a great glasses-free 3D experience. That achievement may still be four to five years away, which works within a time-frame that will allow the industry to focus first on selling Internet connected Smart TVs, clearly the most relevant trend in consumer electronics over the next few years.

The Connected Consumer and Smart TVs

The 2012 CES was definitely the most social of any shows in the past. Intel's (INTC) Social Media Cockpit may have provided an overview of the buzz surrounding CES but it was more a symbol of how serious large technology companies are taking social networking. Moving from one screen (TV), to two screens (+ computer/tablet), to three (+ phone), mobile technologies took center stage at this year's event.

It's the portability of the device coupled with instant access to the user's social network that's getting people like Walmart's Chief Marketing Officer, Stephen Quinn excited. He stated that this trend would have "massive impact" on the entire retail sector during this year's Brand Keynote session moderated by Medialink's Michael Kassan.

It's the human need and desire to be connected that's driving so many of this year's exhibitors to develop Facebook integrations into their products. From DirecTV to Mercedes-Benz to VoIP firm Ooma to Kodak, interweaving the social graph and our online connections to our media consumption was a major portion of new product announcements this year.

Like many of the themes at last year's Social TV Summit (see our coverage here), CES 2012 drilled-down on what motivates — what Janney's Tony Wible likes to call "the hyper-connected consumer." LG, Microsoft and most manufacturers featured app-based TV screens and on-screen navigation advances. In fact, TV app company, GetGlue, which allows viewers to check-in to shows, announced a new $12 million round of funding at the show and that it hit a milestone of 2 million users. "With [the funding] and an impressive scaling of audience last year, GetGlue has arguably become the early leader in social television," said Michael Humphrey on Forbes.com.

It's not just YouTube enjoying the fruits of a shift to an OTT (Over-the-Top) model; digital video recording firm, TiVo announced at the show that it's observing a similar move. The company that provides broadband OTT access to Netflix, YouTube and Hulu said that nearly two thirds of the viewing on web-connected TiVo units is now delayed television or on-demand video via broadband.

Start-ups play a big role in the technology development for Smart TV and its social applications and they were out in force in Vegas. Shahid Khan, chairman of MediaMorph, commented on this trend, saying, "More and more start-ups are participating in CES, and this year will feature a science fair of sorts…"

Front-facing cameras are showing up on numerous new TVs introduced by Samsung and Lenovo — not only as a new way for consumers to interact with their TVs, although that is the primary consumer benefit. Built-in video cameras used primarily for gaming will usher in the potential of true, bidirectional monitoring of the relationship content providers have with their viewers. If advertisers can "see" if viewers were engaged and as direct set-top data reports actual person-by-person engagement, the rules of marketing completely change. Microsoft introduced an advance in its Xbox Kinect software enabling consumers to try clothes on their avatars, which feature the actual sizes and measurements of the consumers. A major industry issue for the next 24-months will be over control of the data made available from installed cameras in TV sets and advanced set-top box data not only from cable and satellite distributors, from Google TV and Apple TV, and from manufacturers like LG, Samsung, Sony and other manufacturers who are developing direct consumer relationships via Internet-connected TVs.

And, of course, some speakers at CES 2012 were there to tell us what we already knew: online video is on fire. "YouTube's audience of 800 million people watches over 3 billion hours of video a month - that's 30 minutes of video for every person on the planet," shared Robert Kyncle, YouTube's Vice President of Global Content Partnerships. He noted that by 2013, 90% of Internet traffic will be video.

Storage: The Underbelly of Smart TV

As TV becomes smarter and more technologies are built around the tube, storage becomes more and more important, even strategic. Dish Networks (now, just Dish) launched a new service during CES that automatically stores over a week's worth of prime time shows from six broadcast networks like ABC, CBS, NBC and Fox (and allows consumers to customize their six-channels for storage). The satellite network's new Hopper box sports over 2 Terabytes of storage, something the 3rd largest pay TV provider in the U.S. hopes will resonate with customers.

Phones: Microsoft and Google Battle (but Apple's Not There)

So many new phones and tablets running Google's operating system were introduced at the show that it was hard to miss Google's expansion into mobile. That, and the fact that Google made a huge hullabaloo during the show as word got out that the firm began interspersing results from its social network into its general search results, overshadowed much of what was going down in Vegas.

Even though it was Microsoft's last major hurrah at the event, that didn't stop CEO Steve Ballmer from introducing some sweet products. According to some analysts, new Window phones, advances in the Kinect game console, and Windows 8 stole the show. Balmer's keynote, however, was a bust with several bloggers and Tweeters comparing the Microsoft CEO to a "used car salesman."

Of course, the 800 lb. Apple gorilla is not even in the room at CES and next year Microsoft won't be there either, causing some to question the future relevance of CES to the consumer electronics industry. But marketers, who have only recently caught the CES fever will continue to show up in big numbers and CES will continue to showcase technology applications that have short-term relevance to both consumers and marketers.

So, even though no huge breakthroughs were made or earth-shattering announcements floated, CES demonstrated that consumers are the ones who continue to win as the media industry evolves. For years, people bought devices that didn't work with one other. As Shelly Palmer wrote last week, those times are clearly over, as big CE firms get serious (and open) about interoperability. "Cloud storage, 3G, 4G, WiFi, h.264, .mp3 and other very common consumer standards have wrenched control away from big CE companies and handed it to consumers," Palmer wrote for MediaBizBloggers.com.