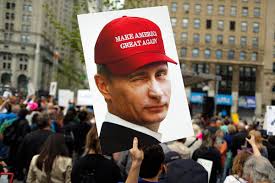 In a presidential campaign amidst a pandemic, there's no question a news story that deserves attention could get lost in the shuffle. Add to that the toll on journalists exacted by the deluge of distortions from President Trump. After nearly four years of covering his non-stop prevarication, through no fault of their own reporters, like football linemen, may well suffer cerebral effects. That's why they could be forgiven for missing an important story of presidential leadership—not from Trump but Joe Biden who recently showed how it's done.

In a country that considers its democracy an exemplar, the news deserves headlines. Citing intelligence briefings last week Biden warned that Russia and China are waging clandestine political attacks on the 2020 elections. "We know from before and I guarantee you I know now because now I get briefings again," he said. "The Russians are still engaged in trying to delegitimize our electoral process." Biden added, "China and others are engaged as well in activities that are designed for us to lose confidence in the outcome."

For anyone who calls the assault on US elections old news, they're missing the point. Presidential candidates receive the same kind of intelligence briefings delivered to the President. Like the report of Moscow's bounty on US soldiers, the intelligence community, a $63 billion-a-year enterprise, believes that the current political warfare rises to a level where the President needs to know. Trump, of course, has said nothing. In speaking out, Biden didn't reveal sources and methods or attack his opponent; he warned about the threat to democracy. That's what leaders do.

Biden isn't the first presidential candidate to receive intelligence briefings. According to CIA's Center for the Study of Intelligence, in 1952 President Truman first authorized CIA briefings for then candidates Dwight Eisenhower and Adlai Stevenson. Whoever won, Truman wanted his successor to hit the ground running. Except for Trump, who in 2016 publicly disparaged the briefings before he even received the first, every candidate has welcomed them, albeit varying the format to fit their interests. For example, presidents Kennedy and Carter had multiple sessions; Nixon and Reagan had only one.

That candidate Trump dismissed their value, of course, isn't is surprise. Reporters by now have emptied barrels of ink recounting his antagonistic relationship as president with the intelligence community. Numerous stories have described his inability to listen to, much less absorb its daily reports and analysis. Disinterested in reading, maps, pictures and charts apparently suffice. On neuralgic subjects such as Russia's political warfare, a threat that Trump calls "a hoax," oral briefings reportedly omit the topic to avoid his tantrums. Unfortunately, whatever the substantive loss because of the calming technique—Trump says categorically he knows more than anyone else, no matter the issue—when it comes to the President's willful ignorance about Russia the American people are paying the price.

Take the government-wide effort to secure the 2020 elections. In 2019, then Director of National Intelligence Dan Coats announced the creation of the Election Threat Executive. Coats named Shelby Pierson, an intelligence veteran, to the job along with a leadership board comprised of senior officials from a dozen or so agencies who coordinate the election's defense. The launch didn't go well. Assuming that Congress needed up-to-date intelligence, Pierson provoked Trump's outrage when she testified that Moscow was again trying to subvert the election to help him. Pierson still has her job, although informing the public about the dangers to 2020 is another matter. Lately the Election Threat Executive hasn't made a peep.

The record speaks for itself. The contrast between the candidates' behavior also couldn't be clearer. With Russia and China, the two foremost American adversaries, attacking the integrity of the democratic process, Trump remains mute while Biden sounds the alarm. If Trump was only a candidate, fair enough: chalk it up to self-interest. But Trump is the President. He leads the government and his statements are its marching orders. Like Sherlock Holmes' dog that didn't bark—the canine whose silence at the crime scene revealed the pup knew his master's attacker—Trump's silence is a national story in an election entering its homestretch.

Leaderless or not, government officials are trying to do their job. According to the Director of National Intelligence, the senior counterintelligence official is leading briefings on election threats for the presidential campaigns and national parties. Researchers who follow Russian, Chinese and others' political warfare would say it's none too soon. As for voters who are the primary targets of Moscow's growing disinformation offensive, bogus social media posts, fraudulent news stories and racial as well as political provocations, the experts also point out the Russians are becoming more brazen by the day.

Matthew Olsen, the National Security Agency's former general counsel, put it this way. "The lesson from (the election in) 2016 is to be more forthcoming publicly about these types of threats." Joe Biden is doing his part. It's valuable but in 2020, as the attacks on the campaigns and the democratic process mount, the news coverage is mirroring Trump's silence. Both are deafening.