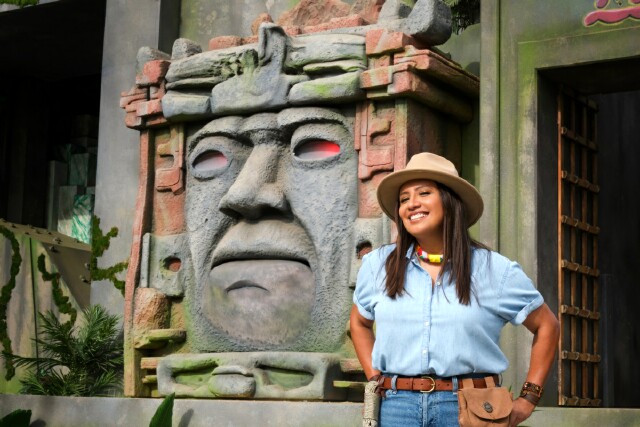 Revered Nickelodeon game show Legends of the Hidden Temple returns to television this weekend, and like its legion of fans, the show has grown up. Temple, a challenge-based game aimed at kids, originally ran for 120 episodes between 1993 and 1995, yet following its cancelation, remained a perennial favorite in reruns over various Nickelodeon channels. Legends 2.0, hosted by Cristela Alonso, follows the same format and challenges as the original, however, the $25,000 cash prize is a far cry from the Atari Video game controllers of yesteryear, and for those who grew up watching the original (who were at the time unable compete and now can), it's bound to ignite feelings of nostalgia. "For me, it's such a great choice to reboot because of that," Alonso explained in an exclusive interview with MediaVillage. "It's one of those shows not everybody was familiar with, but for those were, once they loved it, they loved it!

"What's also great about [this version] is our executive producer Scott A. Stone did the first," she continued. "For him, it was really important to keep the legacy of the show intact, because if it works and people love it, why change it? The only thing that we changed was instead of children, now it's for adults. I think that makes it even better because it shows that even as an adult, you can still be a kid at heart anytime you want. Also, being a family show when kids see it, it's cool they see adults having fun and not taking themselves so seriously. We had a lot of fun doing it and I wanted viewers to get that feeling too, so it was the perfect choice." 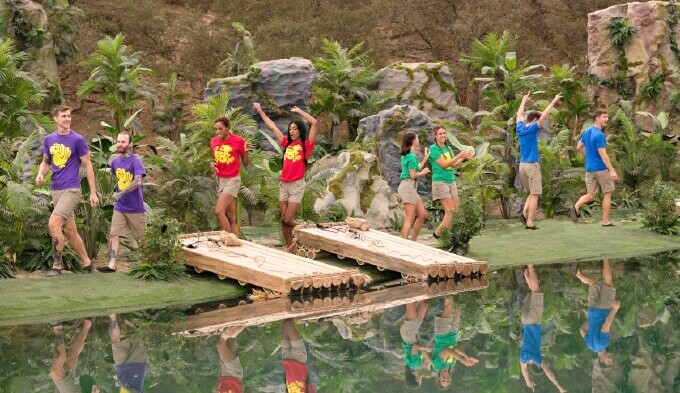 It's no surprise the contestants on this new version of Legends shared Alonso's enthusiasm. All grew up as viewers of the original and got to live out a childhood fantasy. "I love getting to know people", she beamed. "I'd talk with the contestants as much as I could. I made sure they were happy and if someone wanted water, made sure that we stopped production so that they could drink. It felt like we were all on the same journey, where it's the first season and we couldn't understand that we were really here. All of them were so excited! It's a weird thing being an adult and hosting a show you used to watch."

Alonso's co-star is the temple's guardian Olmec, voiced by his original voice artist Dee Bradley Baker. Having Baker on board was a must and provided Alonso her most surreal experience of the shoot. "I watched the show as a kid, too," she recalled. "Having Olmec voiced by the same person… I mean it's his temple! Everyone on-set could mimic his voice, but Dee Bradley Baker had to be there as he also operated the original Olmec and does with this one. When he said my name shooting the first episode, it didn't hit me he was going to call me by my name. So, when he said, 'Cristela,' I was so giddy, like, 'Oh my God, Olmec knows my name!' I was a teenager all over again. It's crazy how certain things take you back to certain times and that's exactly what this did. 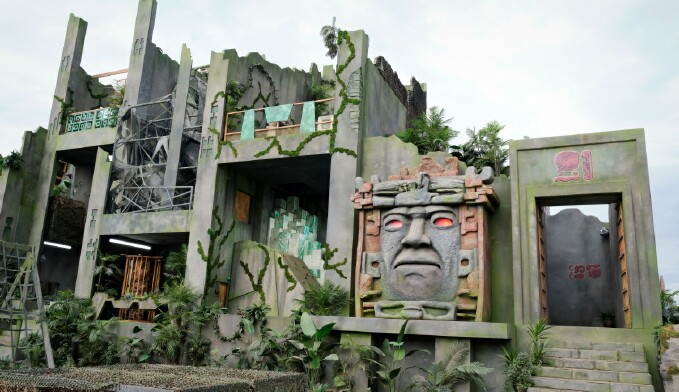 "That's what I realized with the contestants," she added. "When they saw the moat, the temple, and Olmec, everybody had that nostalgic moment. Even though the teams are competing for $25,000 every episode, we learned very quickly that they were all there for bragging rights and to say, 'We were there!' It's very cool, and throughout the season you'll really see the contestants are so happy to be there."

This re-imagining of Legends is special to Alonso as it also marks her return to network television. The talented comedienne took a break during the entirety of the country's previous administration, focusing on raising immigration and healthcare awareness. "I don't think I achieved everything I wanted to do in that time," she explained. "I [believe] that I got to a certain level, but where I'm at now is that I can still work in that space and split my time in that world because I love, and am, committed to it.

"I'm also at the point now where I've realized I can take back a little bit of the intensity and my time commitment to make sure that this side of this world is also taken care of," she continued. "Meaning that you need to make choices. You need to commit. You need to make sure that you are true to who you are and your beliefs. But I also feel I'm at the point of being ready to entertain people again and honestly, I wasn't in that mood the last couple of years. I'm taking advantage of it now."

As Alonso prepares to shoot her second stand-up comedy special for Netflix, she's also excited for the December 10 premiere of Holiday in Santa Fe (a movie she penned during lock-down which stars Mario Lopez) on Lifetime. She also has high hopes of beating the 120-episode run set by the original Legends Of The Temple. "That would be awesome," she beamed in closing. "If we were to do that, it means that we have entertained and made people very happy for that long, which is something I would love to do."

Legends of the Hidden Temple is telecast Sundays at 8:00 p.m. on The CW.