“Dancing with the Stars” and “American Idol”: And the Winners Will Be … -- Alex Petrilli 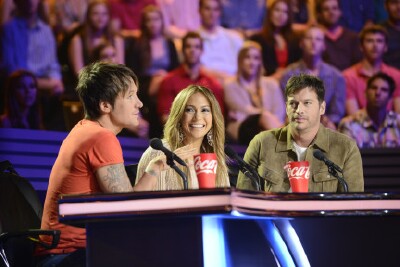 It might surprise you to learn that there are Vegas odds on who will win this season’s “American Idol”; likewise for ABC’s “Dancing with the Stars.” Hang on a second, let me check something. Okay, this might be the shortest blog in history, but I am going to end it now. Catching the 5:30 flight to Vegas!

I was planning on reporting how our TiVo Research second-by-second viewing charts offer very insightful program data regarding participants, judges and, of course, Ryan Seacrest. TiVo Research captures an anonymous daily sample of 350,000 TiVo subscribers on a second-by-second basis allowing us the ability to evaluate even the slightest program viewing nuance, from a nip slip lasting 9/16 of a second to a dancer’s slip ending her mirror ball trophy aspirations.

As I began reviewing this season’s second-by-second charts for “American Idol” and “Dancing with the Stars,” a few things became abundantly clear: 1) Harry Connick, Jr. can be mean. 2) Erin Andrews still acts like she’s conducting interviews in the locker room. 3) The viewers are voting with their remotes.

Let’s take a look at a second-by-second chart for a recent “Dancing with the Stars” episode; time is along the x-axis and ratings are along the y-axis. That spike you see during Meryl Davis’s dancing performance is typically reserved for a last-second Hail Mary pass, but in this case it was a Tango danced to “Feel So Close” by Calvin Harris. 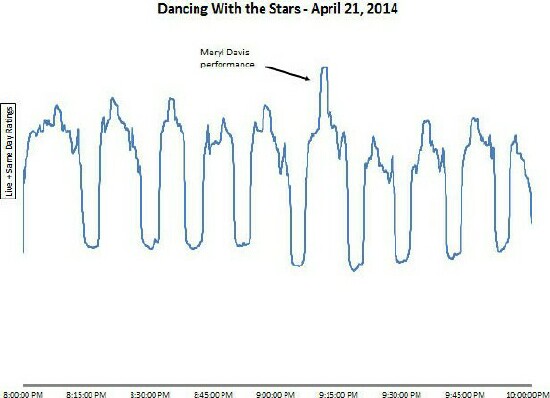 Over on the Fox network, we turn our attention to this season’s “American Idol” where the newly renewed series is getting some bad press for low ratings. Despite those reports, the season has included some impressive performances and, according to TiVo subscribers, nothing tops Jena Irene’s version of the Elvis Presley ballad “Can’t Help Falling in Love With You” on May 7. 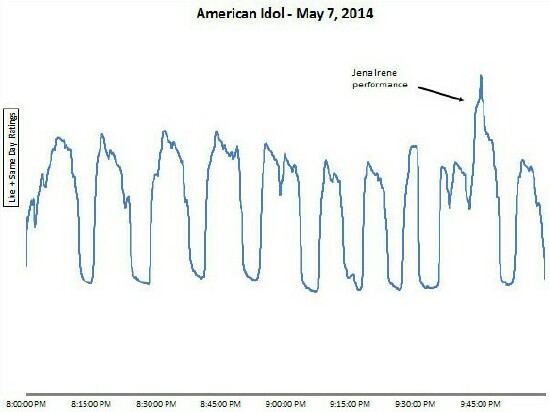 These two performers are consistently being selected as the winners on their respective competition programs based on TiVo subscribers remote-voting (or “remvoting”). Even within this genre, Meryl Davis and Jena Irene are delivering standout performances that not only cause the viewer to hit play, but also rewind and play again.