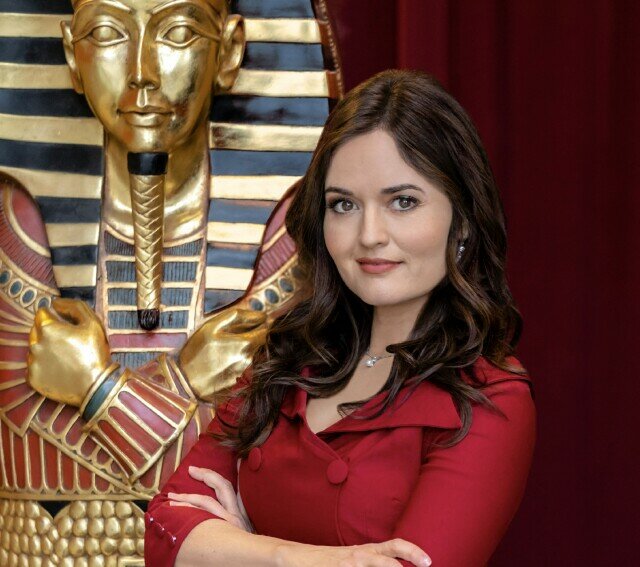 Actress Danica McKellar is putting her supersleuth cap back on this weekend for another installment of her popular Hallmark Movies & Mysteries MatchMaker Mysteriesseries. MatchMaker Mysteries: The Art of the Kill is the third she's starred in, alongside Victor Webster, and also executive produced. This time matchmaker turned amateur-detective Angie Dove is embroiled in the murder of a shady archaeologist, appointed to authenticate artifacts for a museum, and there's a bevy of co-worker suspects. "I think people are going to love this movie because there are so many potential suspects who all have legitimate motives," said McKellar in an exclusive chat with MediaVillage. "It's a really fun ride. Angie is really good at reading people. That's one of her superpowers and what makes her a good matchmaker, so in this one, she gets to use that skill in addition to her charms to get information out of people."

Since originating the role of Dove in 2019's MatchMaker Mysteries: A Killer Engagement, McKellar has grown extremely fond of her character, and told me that having the opportunity to fully explore her has been fulfilling. "Angie is a part of me," she shared with obvious fondness. "That's just how it goes with these characters you play, especially over time. You start to blend and bring more of yourself to the character. Then the writers start writing for you as well. So, I've started to see more myself in Angie. Although, I hope I don't use my charms to get my way the way she does."

All that love aside, there is one Angie trait that McKellar doesn't share. "Although I've been an actress for a while now, I'm a terrible liar," she laughed. "I'm absolutely horrible! It's something my mom instilled in me from a very young age. I'm just truthful. The only way I can lie is if I'm playing a role. I don't have Angie's skill there, and I'm not nearly as brave as she is in terms of running after bad guys who have weapons! I'd never take the risks [Angie] does because I'm a mom and she's not. But she's so much fun to play, and while she has plenty of super-powers, it'd be fun to explore the things she's not so good at." 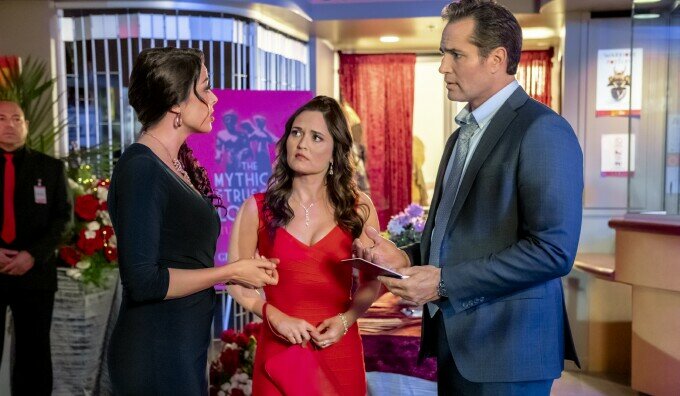 Regarding her own match-making abilities, McKellar prefers to leave those to her character, admitting her level of prowess in that department hasn't improved over time. "I wouldn't want the responsibility," she said. "I mean if I ever thought two people had to be together, absolutely I'd say something. My husband and I were set up through mutual friends, so I'm grateful to the idea of matchmaking. But I don't have that skill myself. I'll stick to acting and writing math books.

"I'm also always checking with my husband about where stuff is, as he knows," she continued. "I'd make a terrible detective. It's a case of, 'I'm not a doctor, I just play one on TV.'"

One thing McKellar has really enjoyed exploring with her ongoing portrayal of Dove is the burgeoning romance between her and Det. Kyle Carter (Webster). She hopes fans will enjoy the turn it takes in this installment. "I love the evolution of the relationship between Angie and Kyle," she shared. "It definitely moves to a new level in this one. In the second movie, there was a scene where I had dinner with my murder suspect ex-boyfriend and Kyle arrests him during our date. I always thought he enjoyed that a little too much. At the end of that movie he says, 'I owe you dessert,' which is sort of provocative itself.

"In this movie, he brings it up and asks [Angie] out, saying, 'It's not a date,'" she continued. "Angie is a matchmaker, but terrible at her own love life. Millionaire Matchmaker Patti Sanger, whom [Angie] is modeled after, will be the first to tell you she's great at matching people, just not herself. So, Angie's really not sure if she should be handling it as a date or not? As Angie, I think she has no clue, but Danica sees it as a date. With the caveat that they're not calling a date so that Kyle can't be held to the idea that it is one. I would love the audience's opinion. Does Kyle ask Angie out on a date?"

McKellar is eager for fans to keep their eyes peeled for another homage to Deadly By Surprise, that "fake" Hallmark movie, starring her, made famous by a mention in Rian Johnson's film Knives Out. "It's still so exciting to have been mentioned in Knives Out," she beamed. "Rian and I, along with our spouses, were supposed to have dinner last March, but COVID happened. It's just a fun running gag and there for the super-fans who remember it from the second movie A Fatal Romance."

Currently, McKellar is hard at work developing her next Hallmark Christmas movie, one she is for the first time helping to pen. She has another math book in the works and is delighted that tutors all over the country have found her previous books helpful with homeschooling during the pandemic. She also has another treat in store for all the Hallmarkies: live tweeting this Sunday during the movie's premiere. "Interacting with the fans has been a pleasure during the last year," she said in closing. "I want people to take a picture of themselves and the TV screen watching the movie. Your hand, the back of your head, whatever! Send them to me and I'll be choosing a few winners at random to get signed pictures."

MatchMaker Mysteries: The Art of the Kill will be telecast Sunday, April 18 at 9 p.m. on Hallmark Movies & Mysteries.