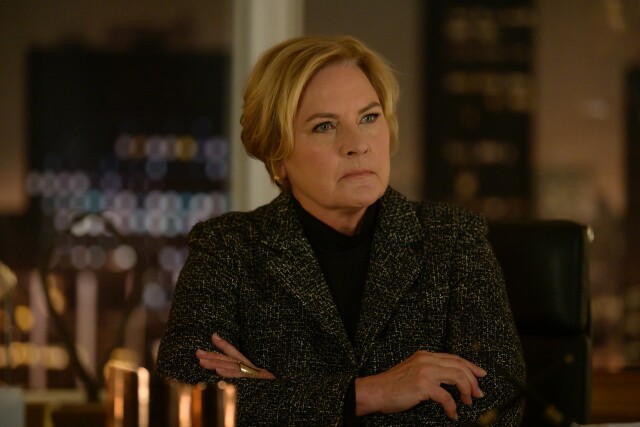 A reckoning came at the conclusion of last week’s ninth season premiere of Suits, USA Network’s long-running legal drama.  It came with the arrival of Faye Richardson, a Bar Association Special Master, sublimely portrayed by Denise Crosby, who will hold each and every person working at the firm accountable for any previous unscrupulous actions.  While ardent fans of the series will likely be upset by the appearance of Richardson, who is going to turn up the heat on everyone, the character does create an interesting dichotomy for Cosby, who realizes she's going to be viewed as the villain.  "Faye Richardson is in town!" laughed Crosby when MediaVillage spoke with her exclusively about her new arc on the series.  "[The storyline] is a very interesting twist as fans of the show, rooting for its core cast, will see her as the bad guy when all she's doing is making them accountable for their actions over the previous seasons.

"It's such a great show to be a part of, especially during the final season," she added.  "And to have this incredibly delicious character bring it home for them.  To be honest, I didn't fully grasp the importance of [Faye] to the entire story arc because the way Suits goes, you never know what's coming.  I'm kind of flying by the seat of my pants going, 'Oh, she does that?  That's interesting.'  With each episode she's more formidable, and as the story unfolds of you get a sense of what's driving her to do this.  [Faye] has an incredible moral fiber.

“[Suits just] sorta presented itself," Crosby continued.  "I had to test for it.  Aaron Korsh, the show’s creator, saw my audition tape and said, 'That's my favorite,' and off we went." 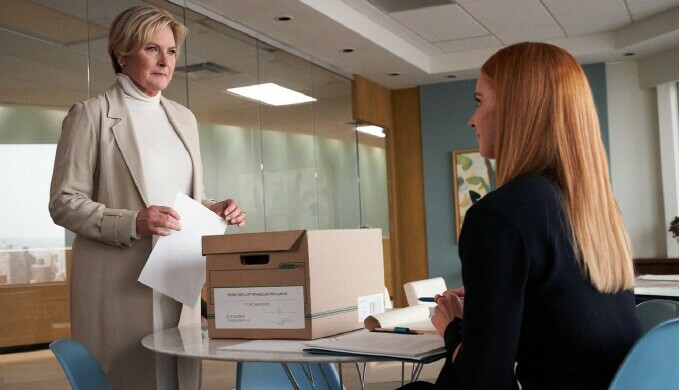 While not an avid Suits devotee, Crosby was well aware of the series.  "I'd watched it in passing as so many people I know had asked, ‘Why aren't you watching Suits?  It's so yummy!’” she revealed.  "But the thing with television right now is there are so many things to watch, and ways to watch them.  [When] I got this role, I did watch the first season.  I’m planning to binge the 8th season, as that will answer a lot of technical questions for me.

"Everyone has been so great in giving me what I need," she added.  "[Faye] doesn't need to know the minutia as she's coming from a very specific place of integrity.  Although she does know what has transpired with regards to people being disbarred, going to jail, and all these other things."

Upon her arrival, Crosby was delighted by the show's cast, who rolled out the welcome mat for her.  "I had no idea what to expect as these people are family and have been working together all his time," she shared.  "I can't tell you how inviting and welcoming they've been -- and I'm not just saying that!  They are just a lovely group of people."

As for newcomers who might be tuning in to see her, Crosby wants them know they won’t be at a disadvantage by being late to the party.  "Suits is very 'of the moment' and while there are references to past incidents, we’re very much wrapped up in the present situation of these people's lives and the scrutiny the firm is under,” she said.  “They are really at the end of the line and they know it, so it gets a little more personal for the characters in this season."

While Crosby hopes to be talking about Suits long after the series ends, there's one role from her past that never eludes her -- USS Enterprise-D, Chief Security Officer Tasha Yar on Star Trek: The Next Generation.  Despite only playing the character for one season (and being killed off), through the magic of television she did appear throughout the series' seven-year run in a variety of roles.  "I think I'll be talking about Star Trek for the rest of my life," she laughed. "That’s the granddaddy of them all."

It's also something she's happy to continue talking about, 32 years after making her debut.  "It's astounding," she said of the fandom surrounding the Star Trek universe.   "We are all deeply grateful and so touched by the legions of fans we've met over the years.  The stories [fans have] shared of what the show has meant to them, we never take that lightly.  It's a blessing and is so much bigger than all of us.  It hit a nerve and continues to resonate and has found a place in pop culture that keeps going."

In fact, Crosby tells me she's open to re-visiting that universe again and is contemplating a third and final installment of her documentary series Trekkies.  "There's a whole new world of Trek to be explored with Star Trek: Discovery and the J.J. Abrams movies."

Should the highly anticipated new CBS All-Access series Picard want to beam her in, she's there.  "Sela (Tasha's daughter) could certainly reappear as she is very much present," she shared.  "That would be a formidable foe for Picard, but I do know that the last thing Patrick (Stewart) wants to do is a Next Generation reboot.

"I think they'll be very selective if any of the Next Generation cast pop in," she said in closing.  "But we will see.  Certainly, when my character died, I thought you'd never see me again, but never say never."

Suits is telecast Wednesday at 9 p.m. on USA Network.