Disney+ Dishes up a Feast with "Wolfgang" 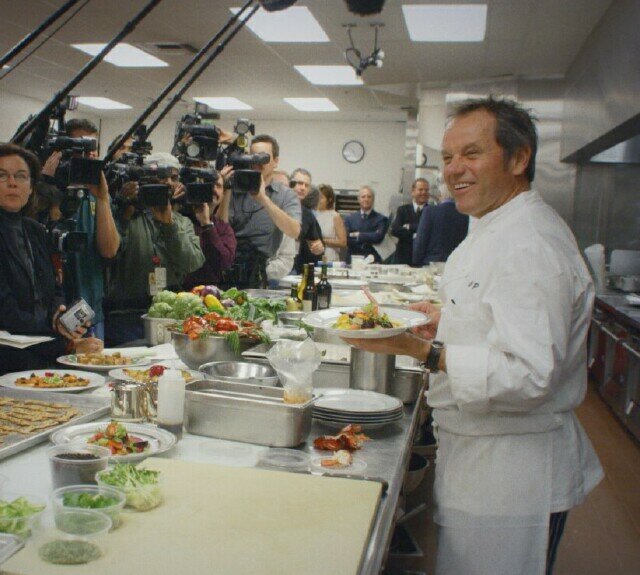 Before he became the first celebrity chef, Wolfgang Puck was a boy in post-war Austria. He left home at 14, desperate to escape his abusive stepfather. Puck knew he liked being in the kitchen with his grandmother, where he felt safe. Broke and alone, he became a cook's apprentice.

Not long after, though, more abuse was hurled his way, this time from the kitchen where he was peeling potatoes. When firing him, the chef used the exact words of his stepfather: "You are good for nothing." Dejected and hopeless, at 14 he stood on a bridge and contemplated suicide. This scene is quietly re-enacted in the gripping Wolfgang, streaming on Disney+ Friday, June 25.

Puck addresses this in director David Gelb's film in the same sort of straightforward manner as the one-on-one interview he gave MediaVillage. The approach is also evident when Puck wends through his dining rooms, chatting. Because he's genuine, Puck doesn't vary, and there are no airs -- just a sincere man who has much to share from his 71 years. 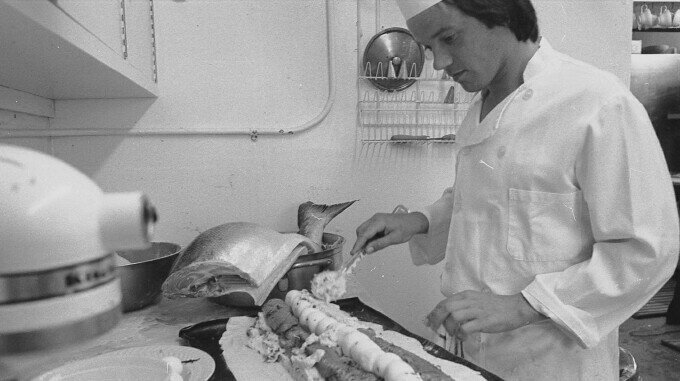 "I would like to inspire young people," Puck said. "Everybody has challenges. It is how we deal with them. There is always a way out. It is like you are at the train station. If you never jump on the train, you will sit at the train station. So, jump on the train! That is how life is. Really, everybody has opportunities in life. You just have to choose the right one, associate with the right people, set a goal of what you want to do and where you want to go."

His was to create great food. It was never about the money, though that came. First, though, Puck landed a true apprenticeship in France, where he learned about using the best ingredients and how to cook. While he loved the restaurant, L'Oustau de Baumanière in Provence, Puck wasn't done immigrating.

At 24, he set out for California. Still broke and adventurous, but now armed with skills, Puck and a pal shared a shabby apartment in a retirement community. Originally, he worked the night shift at a dive.

Along the way, he turned around Ma Maison. When the owner declined to acknowledge Puck as an equal, the chef set out on his own again. This time, though, he was neither broke nor alone. He and his former wife, Barbara Lazaroff, put in the labor to fix up a place that – were it improved -- might work its way up to a dump.

They were still hammering nails into walls, and there was no electricity at 4 p.m. -- on opening day. But the hard work was worth it. Spago was a huge hit and Puck became the first celebrity chef. True, the beloved Julia Child had written her bible on French cooking, and her PBS show attracted a loyal following, but no chef had achieved the sort of rock star status of Puck. It's not just glitter. Puck has earned coveted James Beard Awards and Michelin Stars.

A natural on TV, Puck sparred easily with late-night hosts. A regular guest on the Home Shopping Network, he has cookware products -- grills, processors, blenders -- and a food line. Walk through some frozen food aisles and there's his grinning face on pizza cartons. Puck also has 25 upscale restaurants and 80 cafes in airports and elsewhere. 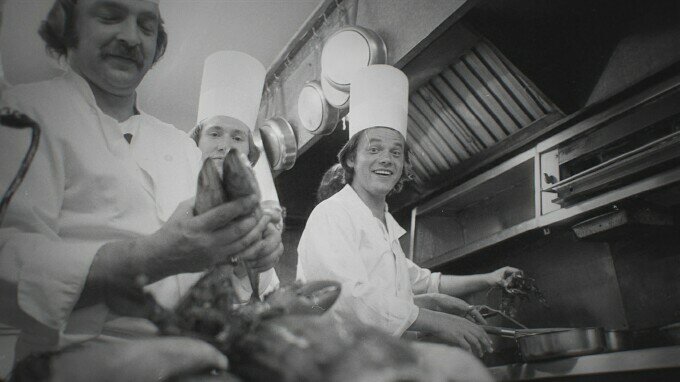 Absolutely nothing was handed to him.

Chef and food writer Ruth Reichl, among the experts interviewed in the film, credits Puck for changing "the way Americans eat." She reminds us how in the 1970s over-processed food products bore little resemblance to anything appetizing, tasty or nutritious. The documentary includes now-laughable ads such as one for Twinkies that declares: "Help your child go and grow!"

"I changed the perception of what the chef, as a professional, is today by opening Spago in '82, by having an open kitchen and [by making clear] the chefs are important," Puck explained. "Before, it was the restaurateur. The chefs were never in contact with the customers."

Spago's popularity cannot be overstated. It quickly became the place to be seen; witness a montage of movie and television stars posing in the restaurant. And it doesn't hurt that the food, particularly his signature dish, wiener schnitzel, is delicious. Hollywood A-listers jockeyed for the best tables. A terrific scene in Wolfgangexplains the anatomy of a what is now a staple on menus.

Joan Collins, a regular, was coming in for her favorite Spago's dish, smoked salmon. Puck slices salmon with the surgical precision of a Zabar's counterman cutting lox for a mother catering her son's bar mitzvah.

The kitchen ran out of brioche for the salmon. Puck needed to serve Collins her favorite. Really, would you have wanted to displease Joan Collins in the 1980s? Her bitch-slap was legendary. Puck did what any resourceful chef does when a vital ingredient isn't available: He improvised.

"I stretched out pizza dough, added some finely chopped onions, and baked a few minutes," he says in the film. He added crème fraîche, thin-sliced salmon and dollops of caviar.

And that's how pizza without tomato sauce and cheese was born.

Although Puck acknowledged that he's not usually given to reflection, he detailed why now is the right time for the documentary that had him returning to his hometown, Sankt Veit An Der Glan, Austria.

"I am at the point now in my life where I can look back, even though I always said I don't look back, and it is only important what I do today and tomorrow," Puck shared. "I don't look at my failures. It is not a failure if you do something wrong. The biggest failure is if you don't do anything."