Diversity and Cultural Representation: Just Do It! 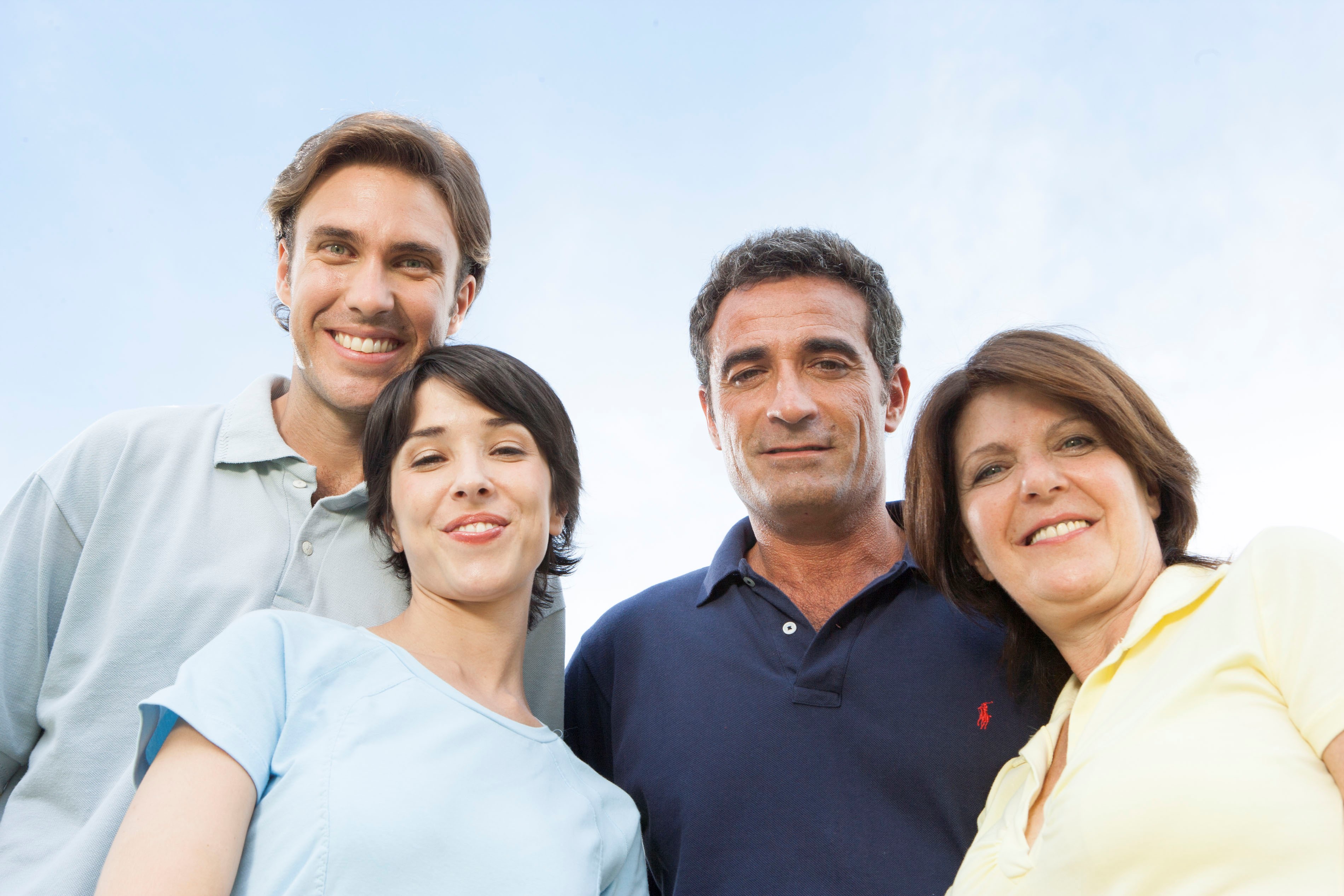 The Futuro Digital Conference, which took place throughout the opening day of the 14th annual New York Latino Film Festival, featured three panels with digital industry executives, content creators and social media influencers.  One topic that was touched upon across all three was the historic lack of diversity and cultural representation, not just in the entertainment industry but in all career paths, and how that is changing. 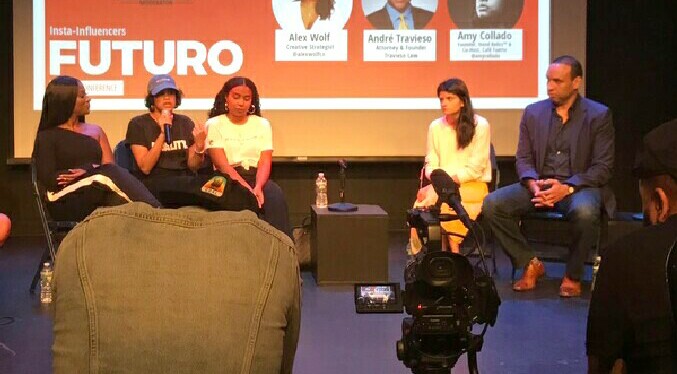 “Growing up I never saw people in telenovelas that looked like me and my family, and we would watch them every night at dinner,” Veloz said.  “I grew up having an identity crisis; even people [in the DR] would say that I was too black to be Dominican, yet my entire family was as dark as me and looked like me.”  She recalled attending the Latin Grammys and realizing that she and her brother were among the few, if not the only, Afro-Latinos on the red carpet.  “I have to be here,” she asserted.  “If I choose not to be here, I’m part of the problem.  When I see a dark-skinned Latina on a Spanish network as the lead actress, I’ll shut up -- but until then I’m going to keep talking and I’ll keep making people uncomfortable.”

The second panel, titled “Distribute Me!” focused on the business side of creating content -- the inception of different content for different forms of media and how the panelists found funding, distribution and more.  Panelists included John Henry, an entrepreneur and co-founder Harlem Capital; Kathleen Bedoya, a former executive at HBO Latino and the co-creator of Hulu’s East Los High; Allen Maldonado, creator of the new short-film app Everybody Digital, and Edwin Mejia, Head of Content at The Vladar Company. (Pictured below, left to right: Allen Maldonado; Edwin Mejia; Natalia Saavedra, CMO of Futuro sponsor Driven Society; John Henry, and Kathleen Bedoya.) 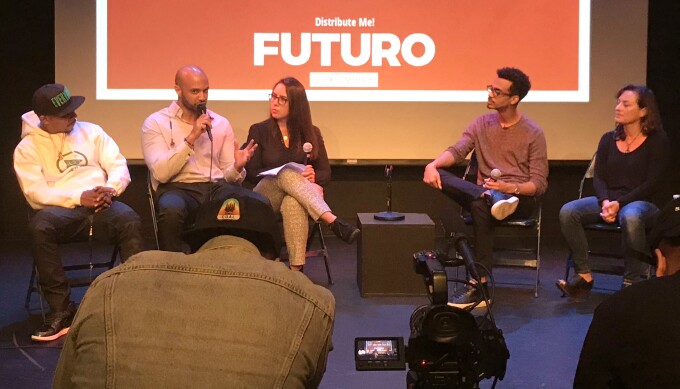 Henry spoke about how important it is for content creators to embrace one’s culture and heritage and to try to infuse it into whatever they are creating as much as possible.  “I’ll never forget going to a PR guru and saying, ‘Hey, can you help me bring my story up?’ and she just said, ‘John, that era is over.  You don’t have to wait for anyone to tell your story.  You can control your own narrative through your own content production,’” he recalled.

“We had about twenty non-profits, all focused on social change, diversity and Latino community work fund [our show],” noted Bedoya.  “We started writing, we shot it ourselves and we made twenty-four episodes.  ABC Family was looking at the show, but with the elements of drugs and sex from the reality of this story in East L.A., networks wouldn’t take it as it was.  Then Hulu came along.  Netflix had just made House of Cards which was this huge success and Hulu wanted to [ramp up original] programming.”

At one point Henry told the audience, “We hear a lot of, ‘It’s really hard to be black or brown right now,’ but from my experience, there is no better time, in the history of ever, to be black and brown than right now.  I have chills right now!” he laughed as the audience applauded in agreement.  “Big companies are facing an incredible amount of pressure to be diverse because the jig is up.”

Bedoya agreed.  “When I attend conferences talking to youth, the No. 1 message I tell them is that they need to start telling their story,” she noted.  “As [John Henry] said, it is the best time to be Latino or anyone of color in this business.  I know because I was there when that wasn’t the case.”

Earlier in the panel, Bedoya talked about dealing with slight prejudice when working with big companies. Executives would often ask her to speak with their maid about something, or someone would call and ask, “Is there a cute Latina there I could take to a premiere?”  These recollections generated audible shock and stifled laughter from the Futuro attendees.

Bedoya said that she sought to make changes herself rather than stand by and let the problems she encountered continue.  “Networks want you to do rainbow coalition shows,” she explained.  “Every time you put in a Latino character they also want you to have black characters and white people and Asian people.  But in this particular story [East Los High], in that neighborhood, Latino was all there was.  That was it!” she laughed.  “We wanted to maintain the creative spirit of our show so we did it all on our own.” 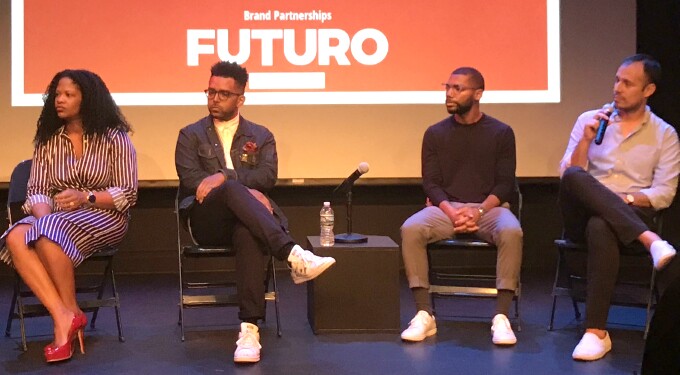 Travieso, who has worked in media and the digital space across several networks, said, “At the end of the day, you’re looking for a certain type of mindset.  You’re looking for someone who is going to be receptive to an ad message or a brand message.  Sometimes advertisers say they want to target an audience that’s Hispanic or Latino and it blows my mind.  That’s way too broad!  Saying ‘we need to reach Hispanics, we need to target our Hispanic audience’ just doesn’t mean anything.

“You have to consider that the more you go down the generational path, they [the audience] aren’t necessarily consuming content in the Spanish language,” she explained.  “They’re maybe using Spanish in the home but not in their everyday, day-to-day lives, so we had to find an interesting balance.”

Industries, entertainment and business alike, are headed in the right direction and these creators, producers and influencers are more than ready to keep that momentum going.  Whether it’s by writing a film to tell someone’s story, representing their culture through social media or funding diversity-driven organizations, they are setting out to create change rather than stand by and hope that someone else does it.

Photos of panels by Juan Ayala.

Juan Ayala is a Connecticut-based writer and a columnist at MediaVillage. He covers topic such as multicultural marketing and diversity and inclusion in the "Multicultural Media" column. His love for TV and film ranges from workplace comedies and p…