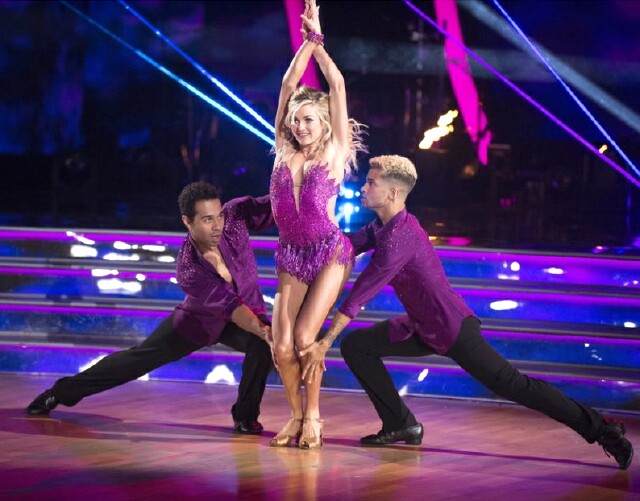 With the Season 25 semi-finals fast approaching, ABC’s Dancing with the Stars delivered on its promise of some history-making, star-packed trio dances last night.  Former DWTS competitors (and some champs) Rashad Jennings, Alfonso Ribeiro, Corbin Bleu, Kristi Yamaguchi, Kelly Monaco and Laurie Hernandez returned for some dazzling routines -- and the results were nothing short of incredible.  Sadly for Terrell Owens and partner Cheryl Burke, it was the end of the line, as they became the seventh couple to be eliminated.  Despite delivering an action-packed Charleston and a steamy Rumba (with Burke and Monaco), their scores last week, combined with votes, were not enough to keep the duo dancing.  Still, Owens admits he is leaving on a high note.  “I left everything I had on that dance floor,” he told MediaVillage after the show.  “Coming to this competition as a non-dancer and making it to week eight, I couldn't have done it without Cheryl and I say that with all sincerity, I think that's an accomplishment in itself.”

Owens also leaves the ballroom a little lighter.  "I think I dropped about eight pounds," he laughed.  "It's a lot of cardio, so I lost a lot of muscle mass, you probably can't tell, but its grueling being on your feet every day for five or six hours.  I knew it would be hard work, but beyond what I imagined and while it was frustrating at times and exhausting, at the same time I had fun doing the show."

Thanks to some intense therapy over the past week, Lindsey Stirling triumphed last night after her crippling rib injury last week.  She and partner Mark Ballas delivered impressive Samba and Jazz routines, the latter with the aid of former DWTS champ Kristi Yamaguchi.  (Stirling, Ballas and Yamaguchi are pictured below.)  "I'm feeling much better and have been taking care of my little rib like it's a baby," Stirling told me.  "It's been non-stop with icing it, creams, acupuncture and I also saw a chiropractor, so it's basically a full-time job taking care of my body on top of dancing all the time. 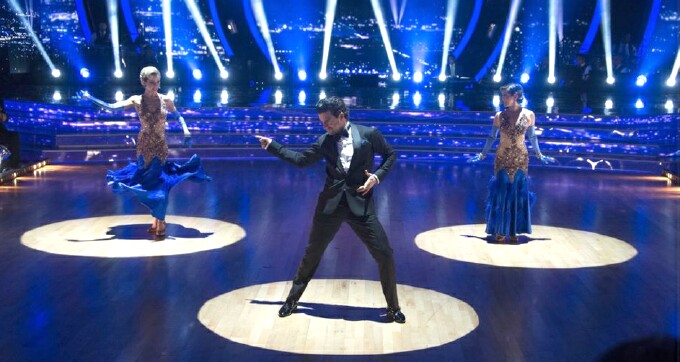 "It was really painful last week," she added.  "I was so devastated because I thought I might be done.  We took things really smart this week and Mark choreographed in a way that wouldn't injure me more and it allowed me to heal."

The night could not have gone better for frontrunner Jordan Fisher and his partner Lindsay Arnold.  The couple earned high praise and a perfect score for their Quickstep, only to follow that with another perfect score for their trio Salsa with High School Musical alum Corbin Bleu.  (Bleu, Arnold and Fisher are pictured at top.)

"Tonight for me was so special," a thrilled Arnold beamed post-show.  "Getting to dance with these two was so exciting because a lot of people that had trio partners coming back had their past partners.  Corbin and I didn't get to dance together on his season, so it was cool to share that moment with Jordan and Corbin and I honestly could not be more grateful that he stepped in this week."

"It was my treat," Bleu added.  "There was way more pressure [tonight] because at least when it's your season if you mess up a week, hopefully, you can come back next week and redeem yourself.  And it wasn't my mirror ball on the line so I didn’t want to mess that up.  I was also the only one to come back who never won a mirror ball, and it still haunts me!"

Victoria Arlen and her partner Val Chmerkovskiy had a nasty scare.  Earlier in the day, during dress rehearsals, Arlen's legs spasmed causing her entire right side to seize-up and remind her of just how fragile her mobility is.

"I couldn't walk or really function for a little while," she told me.  "That spooks me because I have never been given a guarantee that what I went through won't come back.  Everything felt a little funky this week.  Stress can affect me neurologically, but given the eight weeks and how hard we have been working the fact that just today I had a hiccup is pretty good considering where I've been." 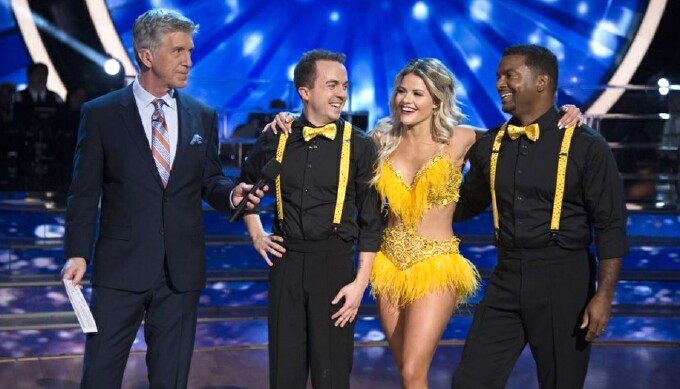 Of the couples advancing to next week's semi-finals, none was more proud of their achievement than Frankie Muniz and partner Witney Carson (pictured above with DWTS host Tom Bergeron, left, and returning star Alfonso Ribeiro, right.)  They finished the night with a combined total for their two dances of 53 out of 60.  "It's crazy to think that we got here," Muniz said.  "But it's also kind of sad because it means were almost done.

"I'm going to try really hard this next week to make it to the finals," he continued. "It's been awesome and such an amazing experience. It succeeded any expectations by 1 trillion.  It's the coolest thing I've ever done and I'm so glad I was a part of it."

The semi-finals of Dancing with the Stars will be telecast at 8 p.m. Monday on ABC.