"DWTS" Exclusive: Hangin' with the Semi-Finalists 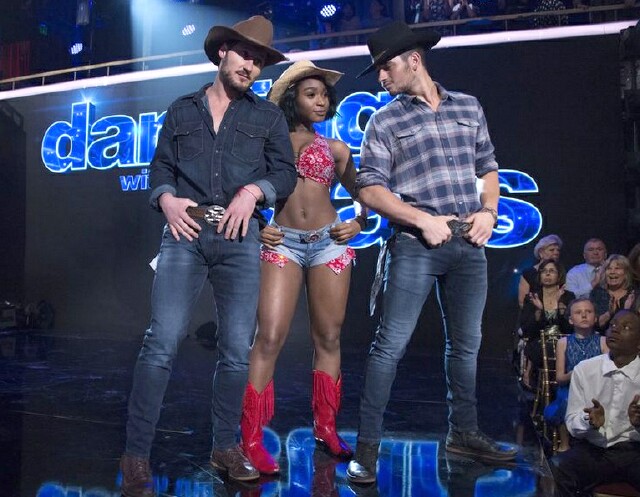 It’s hard to believe Dancing with the Stars moves into its semi-finals next week. The semi-finals! Those words resonated well with the remaining contestants of the ABC competition series following Monday night’s emotion-filled show, with each ready to gush about making it to week nine.

He may have been heavily critiqued for his footwork, but hearing he’d made it through was music to footballer Rashad Jennings’ ears.  “It feels good to hear and it feels good to still be here,” Jennings beamed after the show.  “It was also good to get the [correction advice] from the judges and the scores -- three tens! That’s hard to do so I’m really happy and proud of that.”

Jennings, along with partner Emma Slater, scored a whopping combined 75 out of 80 with their jive and Argentine tango.  They also introduced a new phrase to the English language -- the “Ménage-a-Shad’ -- after adding Whitney Carson to their trio dance.  “That has to be one of my favorite dances that I’ve ever been able to perform,” Slater told me. “It felt amazing and having Whitney was great.” (The "Menage-a-Shad" -- Carson, Jennings and Slater -- is pictured below.) 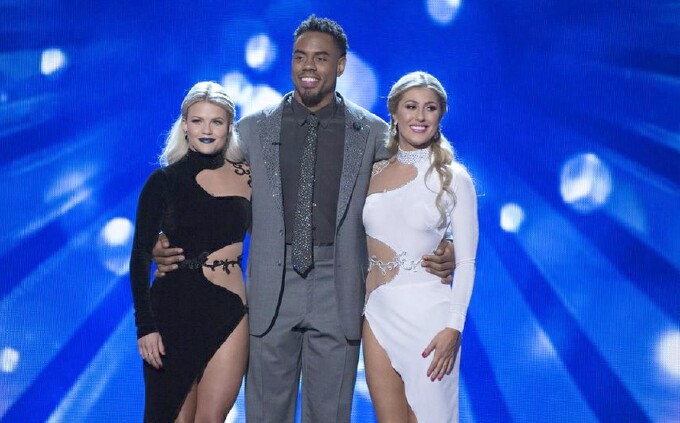 Jennings revealed that he’s not feeling added pressure going into the semi-finals. “As an athlete you understand pressure and you’re used to it,” he said.  “Just stick to the script and continue to work on your craft. That’s all you can do at the end of the day.”

For Olympic gymnast Simone Biles, scoring 72 out of 80 was met with mixed emotion. Biles received heavy criticism from the judges, who felt she lacked emotion during her fox trot and was playing the competition a little safe. “I feel they were pretty tough on everyone tonight,” she admitted post-show. “I don’t know; I smile through it.”

“The judges are there to do their job and they were hard on everyone today,” added partner Sasha Farber. “Standing there hearing those scores, I know exactly how Simone is; she’s 20 years old so to hear all those things I could hear her heart hurting. I’m kind of sorry she had to go through that and I’m right here for her.”

It was also important that Biles stand up for herself following her trio routine -- a pasa doble – when judge Carrie Ann Inaba suggested she “lift her game” and show “a little more emotion.”

“Smiles don’t win you gold medals,” she retorted on air. Post-show she was happy to further explain her uncharacteristic outburst.

“I feel like a lot of other 20-year-olds have gone through a lot of [those] emotions,” she explained.  “But I’ve spent my entire life in the gym training for something I’ve dreamed of since I was a little girl. I think they think that because I’m 20 I should have [already] gone through those life experiences.  I missed out on all of that and that’s why I’m taking a year off and am trying to go [experience them].”

Hurt aside, Biles let the reality of being in the semi-finals sink in. “I’m excited,” she beamed. “It’s crazy when you hear it!”

Fifth Harmony singer Normani Kordei emerged last night as a serious front-runner to take this season’s mirror ball trophy. Both of her routines, an emotional contemporary and a trio jive featuring Alan Bersten, were met with high praise. Along with partner Valentin Chmerkovskiy she emerged with the night’s highest score: 79 out of 80. (Chmerkovskiy, Kordei and Bersten are pictured at top, left to right.)

“When they called my name [as advancing] first … I think it's the first time they’ve called my name first,” she beamed.  “I'm super excited and I'm stoked. I just can't wait!  It's going to be pretty dope next week.”

Baseball Hall of Fame star David Ross met the news of making the semi-finals as only he would.  “All I got is laughter,” he smiled. “Who would've thought? When I signed up I never thought I would've made it this far for sure.”

Ross and partner Lindsay Arnold earned a respectable 65 out of 80 for their waltz and paso doble trio routine, one that incorporating troupe dancer Hayley Erbert.  But he appeared to be in shock about advancing to week nine. “I thought maybe if I worked hard I could get past week three or four,” he admitted. “Now to go to the semi-finals?  I’m just excited about continuing this friendship. [Arnold] is someone I've grown to love and adore along with her husband and family.  It will be a sad day when that ends.”

Ross is no stranger when it comes to making finals.  He won the World Series with the Chicago Cubs in 2016 prior to retiring from the sport.  However, according to Ross there’s no comparing to DWTS to his former profession. “This is a lot more hard work,” he said. “ When you get [to the World Series] you’ve already done all the hard work and you just play. Starting tomorrow I have to learn two whole dances and I'm going to want to kill myself.”

The Dancing with the Stars semi-finals will be telecast Monday at 8 p.m. on ABC.