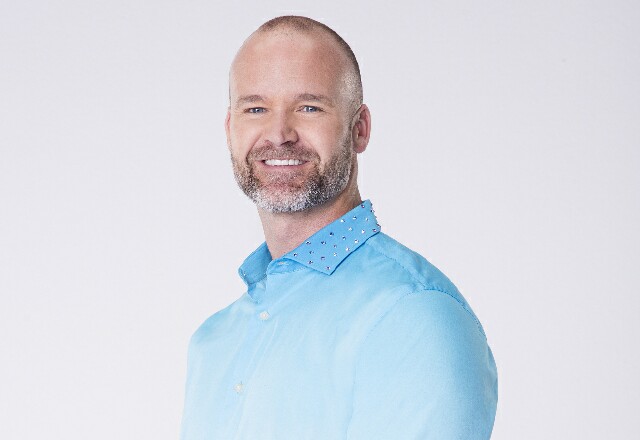 When it comes to having fun on Dancing with the Stars, retired baseball hall of famer David Ross is hands down this season’s winner thus far. If his infectious enthusiasm at leaping from his comfort zone doesn’t inspire dads across the country to get up and dance, nothing will -- and this week surely proved the point. His over-the-top Magic Mike-inspired jazz routine had the audience cheering and him baring a little more skin than he might have liked. (MediaVillage.com's behind-the-scenes coverage of Dancing with the Stars Season 24 continues below.)

“Well, from the get-go I was like, ‘the pants are coming off’,” Ross’ partner Lindsay Arnold told me post show. “He was a little uncertain about the shirt, so I was like, ‘what about the pants?’ He said okay and didn’t seem too scared about that.”

“I said the pants can go,” Ross added. “But the wardrobe team did a great job with the shirt, so I thought it would be hilarious if I ripped that out.

“I really have to give credit to Lindsay,” he continued. “All week I was so hesitant and it took each day to say, ‘a little more, a little more.’  She just kept pumping confidence into me.  So did the people at the Magic Mike Show. A great coach really says it all. I actually had a lot of fun. This may have been my favorite dance so far and I would never said that six days ago.”

Ross did indeed get into the Magic Mike spirit, stripping down to a pair of bedazzled red boxers.  However, he did rely on the cleverly designed spray-painted T-shirt the wardrobe department provided to reveal his “six-pack” – making him the envy of every contestant who has endured an actual all-over spray-tan to get that certain DWTS glimmer. “Yeah just get a tight T-shirt,” Ross laughed. “I’m just glad America didn’t have to see underneath the shirt!”

According to Ross there is “lots of love,” under the shirt, as in “lots of love handles.”  It seems “love” is something the former baseball pro has been getting in spades since stepping into the DWTS ballroom.

“What’s been great is the support from my sport,” he said. “I try to send out the social media stuff.  I’m wrapped up in family when I’m at home, so I don’t follow and read everything, but I have felt so much love.  For me it’s really about having fun and enjoying it.”

Ross admits much of that support has come from his high-school sweetheart wife Hyla, who actually fully endorsed his strip tease on national television. “She knew all week and was very supportive,” he said with a smile. “She knows I’m the guy that does that goofy stuff at home. I do have a goofy side to me. But to do that in front of millions of people and in this environment was a little scary for me. I told her that I’d be coming home with some new moves and the red boxers.”

Dancing aside, the biggest challenge for the family man, who admits he only retired early to spend time with his family, is doing just that. He dances, then catches a red-eye, when required, to be with his family.  “My kids are in the middle of volleyball softball and baseball, so I’m taking a red-eye [tonight] because my son has a game tomorrow and I want to be home and make sure that I’m there.”

Ross told me he has never been a wedding wallflower, and that if he inspires dads everywhere to get up dance, he’s all for it. “I’ve always had fun dancing, but nothing like this,” he admitted. “This is taking me further and further outside of my shell and I hope it does more at social events.

“I hope I have these moves when I’m 67 years old,” he continued. “I’m learning things I didn’t know and things I’ll use every time Bust a Move comes on a sound system to hit the dance floor. I’ll break it down, just like that!”

Indeed, last night’s routine could started him on the road to a whole new career. “I could do bachelorette parties now!” he laughed. “And the guys behind me as backup dancers? Who would’ve thought I’d have backup dancers after playing for major league baseball!”

David Ross’ journey continues on Dancing with the Stars next Monday at 8 p.m. on ABC.