“DWTS” -- Bonner Bolton On the Aftermath of Handgate 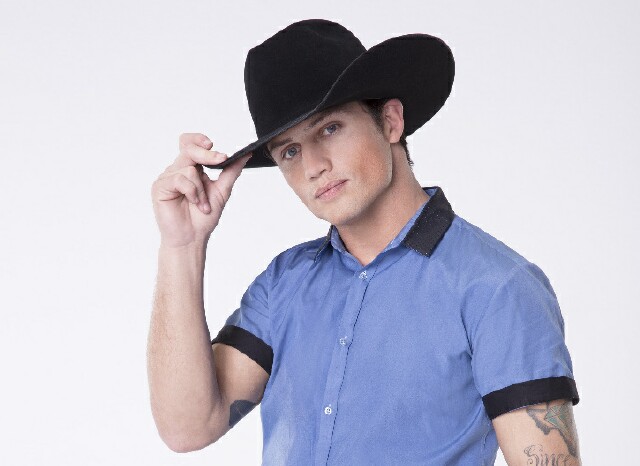 There’s no denying pro bull rider Bonner Bolton made quite the splash last week when making his Dancing with the Stars debut.  Out of the gate, the strapping 29-year-old’s chemistry with pro-partner Sharna Burgess was palpable and became the talk of the night.  That was until an innocent backstage hand gesture on Bolton’s part (featured on camera during the show) had tongues wagging.  The gesture appeared to show him inappropriately groping Burgess’ Daisy Duke shorts and didn’t go unnoticed by the Internet.  Soon the shy Texan found himself front and center of Handgate -- Season 24’s first controversy.

According to Burgess (pictured below with Bolton) it only took 20 minutes for Handgate to infiltrate her social media and she knew there’d be some explaining to do. “I looked at my Twitter feed and was like, what is going on?” she told me post show last night.  “It was a busy week for sure and it wasn’t all dancing.”

“It was innocent and nothing was meant by it,” added a still mortified Bolton. “My hand accidentally fell and she bumped into it. 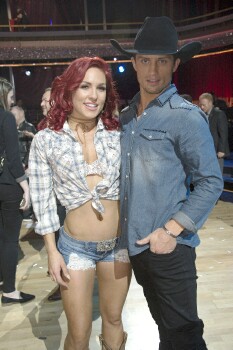 “There was a lot of buzz all week that we had to clear up when we weren’t practicing,” he continued.  “We spent a lot of time with the media trying to clear this whole thing up.  But I think what needs to be heard is what I came here to do, tell my story.  Sharna does a great job with that and it’s time to redirect the focus to why I’m here, which is really here to inspire people.  I have all the respect for this young lady.”

“It does suck to have Bonner come on Dancing with the Stars and get all this attention and then some of it was so negative,” Burgess said.  “I hated for his experience to start that way because this can be such a beautiful thing and everyone’s getting to know him and are falling in love with him.”

Bolton revealed that while the incident did “take the fun out of it for sure,” there was a larger downside to the whole ordeal.  “I actually substituted doing therapy for my neck all week trying to clear up all the stuff in the press,” he explained.

Rumors circulating that the couple are, indeed, a couple were fueled last night when the show featured a package highlighting them holding hands.  According to Bolton they are “absolutely not dating.”

Burgess said closeness between a pro and partner is nothing new.  “Okay, we hold hands all the time, we hug all the time,” she revealed.  “We’re having a great time getting to know each other and we are in week two.  How quick does anyone expect this to happen?”

Bolton said that with this week’s dance he felt right at home in the ballroom. In fact, it reminded him of the two-step he’s familiar with.  “I really connected with this dance.  Above all that it reminded me of the uncle I mentioned who had the injury [and is now wheelchair bound].  I know he’d still be dancing with my aunt right now if he could and I really felt that with this dance.”

Bolton did keep all hand gestures above board this week and closed our conversation with a dash of Texas charm.  “Now I’m like Ricky Bobby,” he smiled. “I don’t know what to do with my hands.”

Bolton’s journey on Dancing with the Stars continues Monday at 8 p.m. on ABC.