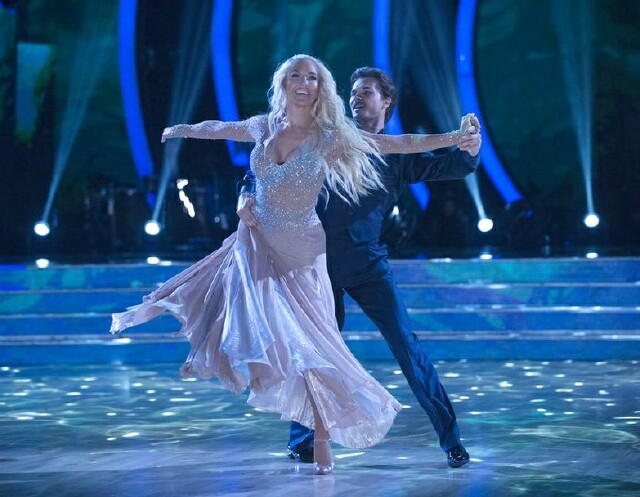 Synergy was in the air last night, along with a little magic, on ABC’s Dancing with the Stars as the show paid tribute to the network’s parent company with a Disney themed night.  Sadly for The Real Housewives of Beverly Hills star Erika Jayne, though, the night’s festivities did not go according to plan.  She had endured a difficult week of rehearsals, one that saw the usually abundantly confident star reduced to tears and questioning her ability to remain in the competition. And then Jayne didn’t get to perform a dance inspired by her favorite Disney character, Tinkerbell. But together with partner Gleb Savchenko she did execute an emotionally charged Viennese Waltz inspired by Finding Dory. (The two are pictured above.)

Despite some encouraging words from the judges after her dance, their combined score total of 32 wasn’t enough to save Jayne from elimination. She put on a brave face after the news was delivered on the show but was visibly distressed. “Erika had the wrong partner,” a source close to the RHOBH star shared with me after the show.  “They had no chemistry on the ballroom floor and Gleb didn’t lead her to greatness. The outcome would have been different if Erika had had a winning partner.”

Hot on the heels of scoring the season’s highest score last week, Rashad Jennings and Emma Slater danced a foxtrot inspired by Beauty and the Beast, once again dazzling the judges. While his musicality was questioned, Jennings scored 32/40. “There was a lovely elegance about it,” commented Len Goodman.

Nick Viall and Peta Murgatroyd had some fun with their Pinocchio-inspired jazz routine (pictured below). While many expected The Bachelor star to appear as Prince Charming, it wasn’t to be.  “As Pinocchio we wanted to go right into character and wanted to ham it up every step of the way,” said Murgatroyd. That they did -- complete with lederhosen. Viall earned his highest score yet with 34/40. 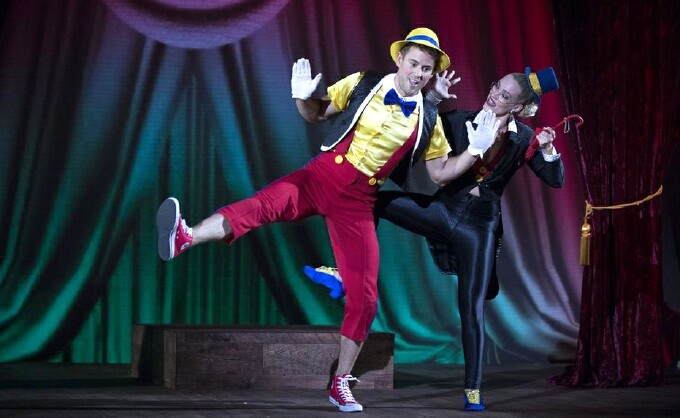 Heather Morris and substitute partner Alan Bersten danced a jazz routine from Frozen to mixed critiques from the judges. Unfortunately, Morris didn’t get to play dress-up as Ariel from The Little Mermaid, a character she has “loved” since she was “little.” While most cheered her, judge Carrie Ann Inaba gave Morris some of harshest comments thus far. She scored 34/40 and was met with good news after the dance – partner Maksim Chmerkovskiy will return to the competition next week.

Bonner Bolton and Sharna Burges were transported into a video game for their Wreck-It-Ralph inspired tango. While Woody from Toy Story would have been the obvious choice given Bolton’s cowboy style, Burgess squashed that idea. “We knew it wouldn’t be Woody,” she said. “I don’t like doing anything too obvious.” It worked. The judges loved the performance, awarding Bolton 30/40 and offering praise of his frame and embodiment of the character.

David Ross and Lindsay Arnold danced a Cars 3-themed jive that would have made Season 15 DWTS champ Helio Castroneves proud. Even though Ross’ body appears to be succumbing to the rigors of dancing, he high-kicked his way to a respectable 29/40 and was praised for not missing a step.

Nancy Kerrigan and Artem Chigvintsev wowed the judges with their magical jazz routine inspired by Enchanted. Kerrigan was praised for her execution and princess-like quality and was awarded her highest score of the competition, 36/40, leaving her all smiles.

Simone Biles revealed to partner Sasha Farber that she was starting to feel the pressure of the competition this week. Still, she managed to have fun with her contemporary themed Moana routine. The dance was a huge hit with the judges, who praised her prowess, happily scoring her two tens and a total of 38/40.

The competition on Dancing with the Stars continues next Monday at 8 p.m. on ABC.